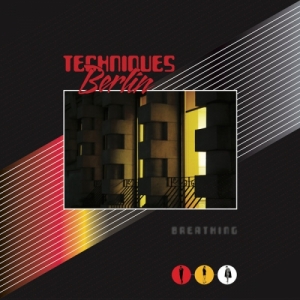 8.5
"Great"
N/A
Electroracle
Released 2018 by Nadanna
Synthpop, New Wave
Recently we broke down Techniques Berlin's Breathing double LP as well as conducted a very detailed audio interview with both Andreas and Dave. Breathing dazzled us with the embers of  80's revelry mixed with the contemporary machinations of two old school vets that continue a journey with no end in sight.

Of course the obligatory remix album had to be to released. This is a common practice with Nadannna Records. Although it not a bad thing, it is a long long thing.  Nadanna finds ways to keep the remix versions interesting with collaborations usually reserved for dreams. As if the original versions were not enough, you get 20 more tracks with DNA alterations mastered by Doruk Ozturkcan of She Past Away.

My question to you is, at what point does a label's generosity become an artist's over-saturation? Do we really need all of this? Do all of these renditions cheapen the overall work? These are the questions that plague me with my views on remix albums even when it is a band I hold in very high regard such as Techniques Berlin.

The first tracks that caught my attention were by Rational Youth and Tony Marinello. Rational Youth have been a huge inspiration to many artists in and out of Canada. Andreas and Dave were honored to have Rational Youth cover one of Techniques Berlin's early tracks "Dancing To The Fall Of The Berlin Wall" that was re- titled "East Berlin" to avoid confusion with Rational Youth's timeless classic called "Dancing On The Berlin Wall". Andreas and Dave released the track initially back in 1985 on cassette. Now it's a bit more accessible appearing on this remix album. If you haven't heard the 1982 classic LP Cold War Night Life by Rational Youth, put it on your must experience list!!!! It is as close to a perfect album as you will ever hear. We've detailed Tony's background as he has remixed several artists on Nadanna's roster using his arsenal of drum machines, synths and otherworldly creativity. "Love Via Computer" is a fan fave that Mr. Marinello injects a high dose of adrenaline into resulting in a faster pace and more aggression in the overall sound.He never disappoints with anything he touches. Check him out on Facebook and Discogs to learn more about why he is so good at what he does.

The next remix I jumped to was from the Greek minimal dark wave project know as Paradox Obscur. The vocals take on an echoed effect while the music travels down darker roads which is part of the lure with Paradox Obscur. They have plenty of music available for you to gorge yourself with. After Paradox Obscur I jumped around checking out past/current projects Agents In Infrared and Bang Elektronika from Andreas and Dave.  Agents In Infrared is another project of Andreas Gregor. "Concrete And Steel" is actually one of the earlier Techniques Berlin tracks that never really found a landing spot due to the only recording being done from a boombox. Andreas always had a fondness for the song, so it goes to Agent In Infrared, hence the cover. Bang Elektronika sounds like it should, being backed by the 90's EBM powerhouse that Dave and Andreas created.

I really enjoyed the synthpop electropop style of the Glen And Joe Show remix. I was not familiar with this act but I am quite familiar with its members. The Glen And Joe Show have a 7" on Artoffact that is very good and I can totally see why their remix was included. One of the members is some dude Dave Ogilivie. Interest Piqued? Well Glen is Glen Nelson and Joe is Joe Vizvary of Images In Vogue fame, you know, the legendary new wave/synthpop group from Vancouver with members of Skinny Puppy and Numb. Joe also contributes to the Images In Vogue remix for "Breathing".

There are so many more to listen to. The Classioline remix was interesting due to the fact I discovered a cool new artist I have not heard before. Their album is now on my want list. Epic Dreams released the highly praised In The Cold Light Of Day album back in 2015 on Ann Logue Records. Their remix adds a little more content than the original version. There's definitely loads of bleeps, bloops and samples that add some new characteristics to an already awesome original. Other notable remixes/covers are done by minimal legends Nine Circles, French minimal synthpop outfit Makina Girgir, Electronic Dream Factory, Datafreq (Dave Rout's Electro/synthpop outfit from the early 2000's), "Runaway" cover originally done by Michael Gabriel, Kevin Komoda, Ultra Arcanum and 23rd Underpass. Both 23rd Underpass and Ultra Arcanum add varying styles to their treatments. 23rd Underpass employs an Italodisco approach while Ultra Arcanum darkens the room with airy depressive synth vibes. Datafreq released a great album called Fun For The Whole Family back in '06 with a very minimal foundation with plenty of treated vocals and  samples. That same style can be found on their rework of "System Addiction". Kevin Komoda's remix of "Secret Lies" is a peppy upbeat version that will certainly bend your ear a little closer to the speaker. Depression Era adds an experimental side to the remix album. They have an interesting approach to their design with glitchy influences and vocals that sound shouted through a loudspeaker. Along with the extra bonus tracks this is the overview of the remix and cover portion of the Breathing opus.

I am always impressed with Nadanna's commitment to giving the customer the most bang for the buck. They love to create enticing collaborations that draw a lot of interest just from reading the track list. I am always happy with a physical release, however these days remix albums seem to work better as digital only option given the buying environment of these dark days for physical media. I can't remember the last time I bought a remix album, but if I were to start, this would be my starting point.

My overall feeling dwells with my love for the album Breathing, which remains today as a contender for album of the year, comeback of the year, or whatever awards there are for top releases of the year. I was content with that alone. The remixes tell a wonderful story of the history both Andreas and Dave have shared over the decades. They both have contributed so much to Canadian electronic scene that sometimes goes underneath the radar given the endless seminal acts that originated within the musically rich Canadian scene.  They tell a story about the history of some highly regarded Canadian acts and some lesser known ones as well. The remixes and covers are all very good in their own way, even the non Canadian ones. Anyway, it's good promotion to showcase other artists on an album by a band that has a cult following or at least a solid dedicated fan base. Hopefully some of these artists get some hits on their Bandcamp or Facebook pages from the press that has covered Techniques Berlin's return all over the globe.

poponaut
Techniques Berlin - Breathing is available at POPONAUT from 19,95€