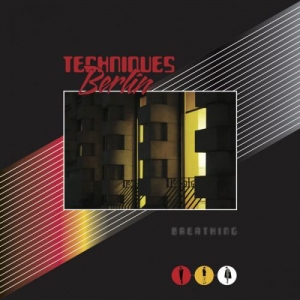 9.0
"Amazing"
N/A
Electroracle
Released 2017 by Nadanna
Synthpop, New Wave
Andreas Gregor and Dave Rout have a long history in the Canadian electronic music scene that stems back deep into the 1980's with the cult electro new wavers Techniques Berlin. Much of Techniques Berlin's work has found refuge in old collections in the form of two anthology CDs simply titled 'Back Issue Vol. 1' and 'Back Issue Vol. 2' on the band's own label Bombshelter. If you were really on top of your TB game, you purchased the super limited edition compilation  'Suburban Playgrounds And Concrete Beaches' vinyl LP (300 copies) 6 years ago on Fabrika Records. Of course everything has been long sold out due to the never waning interest in Techniques Berlin. Due to that interest we arrive at this double LP comprised of new material and alternate versions of some of the classics. Later on, a companion double CD  will be released by Nadanna with plenty of treats in store.

For those of us that grew up in the 1980's we saw the genesis of the home computer and some of the amazing things it could do as well as how it changed our culture and the way we think. I was fortunate that my father was heavily into the computer revolution. We had word processing, modems, games etc. when most of my friends did not have a home computer. The VIC 20, Commodore 64 and later the Leading Edge desktop helped define my love for all the offerings the computers had. Techniques Berlin wrote songs that reflected that era. 'Cyber Threat', 'Love Via Computer', Machine Language', 'Transmission' and 'Metropolis' are testaments to that time with their amazing arrangements and danceable progressions. These tracks and others take me back to those exploratory times of my teenage years as I shaped my path to today.

As you indulge in Techniques Berlin's new double LP 'Breathing' on Nadanna Records you feel a sense of revelry. Everything sounds so much within the era the original material was released, i'm afraid to call it new material. "Deep End" opens as if it was the A side to a 12" released 1986. The fast-paced beat with the addicting melodies and transitions to the chorus are top notch making this a choice entry to kick off this highly anticipated return to brilliance for Techniques Berlin. "Cold War" rings in more 80's vibes with backing vocals/spoken piece done by Tracy Howe of Rational Youth. Although the song is 5 minutes long, the repetitive nature of the track makes it seem longer. It definitely has hints of Rational Youth's classic track "Dancing On The Berlin Wall" as well as sharing Rational Youth's title of their finest work to date 'Cold War Night Life'  as the chorus. The original theme of "Cold War" centered around dating and how much easier it was with the threat of nuclear annihilation in the cold war era. With the original working title "Cold War Love Life", Andreas and Dave thought it was too similar to the Rational Youth title. Andreas sent the track to Tracy Howe to see his thoughts on it, and he liked it. Tracy ended up joining Techniques Berlin on stage in Montreal and this is how he ended up recording on this song. "Serendipity" and "Damage" continue the new material as if these  tracks were lost in the TB vaults and just found. The beautiful synth rhythms flourish in the vast technical display of pure awesomeness paired with perfect melodies and well timed drops. "Damage" also displays more of that 80's retro sound. I like the short vocal verses and the time in between the next vocal piece sets up the crafty nature of the track. "Damage" laces some killer sparkling keys set to mid-pace beats that will surely captivate the most discerning electronic aficionado. Techniques Berlin show their fans that this is not  just some cheap come-back gimmick to generate relevance. Every track is well-designed with ample time taken to ensure the best product possible. "Burning Down" sinks the tempo to a less moderate pace. The vocals seem to take a more dominate role this time. Midway through the track there is a nice long instrumental surge between the next vocal piece showcasing brilliant electronic arrangements. "Hollow Graphic Haze" reveals Dina Naskos' backing vocals set to somewhat spoken style vocals leaving the more melodic style behind. This is similar to the "Cold War" vocal style. The diversity in the vocal style really helps keep the overall feel to 'Breathing' fresh and vibrant in nature. "Driving Force" and "Changes" solidify the structural integrity of 'Breathing' by holding the midway point on stable ground. Once again, there are no filler tracks, just top notch programming and arrangements throughout. "Changes" seem to revolve around a lost romance, thinking about another dance with the lost love. The lyrics reminded of Nadanna's logo of the dancing couple. "Driving force" keeps the album flowing in a great direction. If you listen carefully somewhere after the two minute mark, there is an echoing distant sound that reminds me of indoor racket ball. I guess you will have take my word for it or listen and decide for yourself. I love the choices of sounds. I'm sure this was not what Techniques Berlin had in mind, but meshed together with everything else it works brilliantly to keep strength of the album up. "Breathing" marks the end of the new tracks along with "Salvation". 'Breathing" is definitely a stand out offering. With its quick beat and perfectly executed monotone yet melodic choruses makes this a super enticing concluding routine to the album that shares the song's title. With the 20 plus synths Andreas and Dave have between them there's always a way to elevate their game. They certainly did that on each of the 10 new songs.

"Picture Show" was written in 86 or 87 as a tribute to the Canadian musician Nash The Slash. Nash The Slash used to play live in old theaters to provide sound for silent movies. His signature look was a tuxedo, tophat, sunglasses and his face wrapped in bandages. The band was fond of his work and got to know him. After his passing in 2014, Techniques Berlin decided to re-record "Picture Show" as tribute to him and his work. "Picture Show" features an aggressive instrumental build paired with some piercing synth work making this track a perfect tribute to a musical icon. Most of the tracks after "Picture Show" will be familiar to long time fans of the band. Although these tracks may be alternate versions or rehearsal versions, they are still just as cool as the original versions. "Watching You", "Beats Like A Machine", "Planet 21", "Miles Away", "Pieces Of Glass", "Just One Look", "Where Have You Been" and "Metropolis" can all be found on iTunes in the digital format in the original versions. The somber sounding "Sudden Guilt" has never been released previously.  "Miles Away" has a familiar title to fans of John Foxx. The reference was unintentional and is not a cover version. Andreas' love of John Foxx can be found more easily on his Agents In Fared project. "Miles Away" is remastered from a chewed up four-track cassette. The track came to be when Dave played the demo version for Andreas. Andreas promptly pulled into a 7-11 parking lot, purchased a notebook and began coming up with lyrics to compliment the music. He ended up writing about a girl he knew in college. "Metropolis" is the end result of a ten year process to get Dina to act as a replacement for Dale Hanlin after his short tenure from 1990-1992. Dina, Dave and Andreas played "Metropolis" in a rehearsal session and loved the outcome and decided to record it.

Nadanna and Techniques Berlin collaborated to introduce new material and alternate versions of early works because they heard the distant calling and local callings for new material from a band the fans will never let die. Andreas and Dave heard their calls and made a comeback album new fans and long time fans will appreciate. Given Nadanna's track record with remix CDs, you know when it is finally released sometime in the spring you will hear some incredible stuff.

Dave and Andreas both worked with Digital Poodle adding percussion and drum programming in the mid 90's. 12 years ago Das Drehmoment released Datafreq 'Fun For The Whole Family' album in 2006 showcasing the duo's vivacity and abilities to perform some killer addictive electro synthpop with some minimal influences. There was and is some amazing music that came out Canada that wasn't Front Line Assemble or Skinny Puppy. Do yourself a solid and explore Dave and Andreas' works. They certainly earned a spot in Canadian music history through their music and the influences they have had on others.

Of course Martin Bowes is responsible for the mastering and Steve Lippert took care of the cover art. The record is limited to 350 copies, gatefold sleeve and inner sleeve with lyrics and credits.

Credits listed incorrectly on the album for LP1. Below are the correct credits as per Nadanna Records:

LP1 Credits: all words by Andreas Gregor except "Driving Force" by Dave Rout.
All music by Techniques Berlin.

poponaut
Techniques Berlin - Breathing is available at POPONAUT from 19,95€