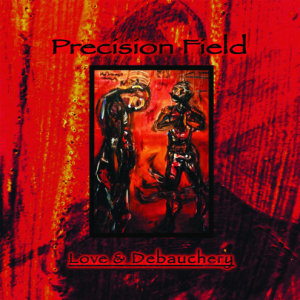 8.0
"Great"
N/A
Electroracle
Released off label 2020
Industrial
Finally, after years of waiting Precision Field, also known as Hobart Blankenburg, has unleashed a proper full-length deep dive into the darkest corridors of the mind and the most disturbing realms of human depravity. Hobart invites us to join him in this journey through the taboos of society that tear at the fabric of social mores and folkways.

Precision Field's disturbing content is ubiquitous. It breathes life into Love & Debauchery. When I asked Hobart how he came up with the title Love & Debauchery he said, "The album was originally going to be called Murderphile, but there was something about that title that didn't sit right with me. After I wrote 'Love & Debauchery' I was like....Wait! That's an awesome album title but it is already the name of this song. So I said fuck it! Who says I can't use it for both?" He goes on to explain more in detail how the origins of the album title came to be. "Most killers are aware that their depraved sexual acts are wrong, however violence, sex and love are very intertwined for these deviants. Jeffrey Dahmer, 'loved' the corpses he kept in his apartment and while Henry Lee Lucas 'loved' Ottis Toole, the things they did together were depraved. That's how I came up with the title 'Love & Debauchery'."

As I started to try to breakdown the themes to this album it came down to my interpretation versus Hobart's vision. Normally it's fun to add what I think the song is about, but on the other hand when digesting this album's themes and concepts I felt it would not do the readers justice to just see it from my side. After all this is about Hobart and Precision Field. I also felt for an artist to immerse themselves into such content rich in dereliction it may be better suited to hear from the author. With that being said, I asked Hobart if this was a concept album and what the inspiration was to write it. He responded, "It is a concept album where I vacillate between writing from the perspective of a serial killer and writing about my own experiences with excessive drug use. The album was originally to only contain songs written from the perspective of a killer but about halfway through I realized it had become much more personal than that. The obsession these murderers had with killing was very similar to my compulsion to use drugs; in both cases the killer and addict are powerless. When writing the title track I wrote the lyrics 'I'm a liar, compulsive liar, interrogate me, interrogate me'. On the surface, I thought I was writing from the perspective of Henry Lee Lucas and how he lied about the number of murders he actually committed. However, I felt an immense amount of emotion and personal guilt while singing those lyrics, almost making it too hard to finish. My sensitivity was in part due to the fact that last December & January I was unemployed and home alone recovering from an intense surgery. I completed more than half of the album during those two months". I wasn't sure where Hobart would go with this loaded question. I did not pressure him to answer anything. I do think beneath the surface of the heavy electro-industrial foundation you'll find that this album is both an outlet and an airing of sorts that serves as a part of therapeutic healing. Hobart continues to explain the concepts of Love & Debauchery. "I wasn't sure about the guilty feeling until I realized Love & Debauchery was about me. I had an absolute love affair with heroin about a decade ago. When I was in active addiction and living at home I would get caught by my mom and 'interrogated' by her. I would always lie about what I was doing even if the truth would suffice."

Today Hobart has a great relationship with his parents and step parents. He is also married with a little girl of his own. "Thank God I am an artist and have somewhere to put all of that creativity. Making music is the way I process that inner torment and get through it."

As the music begins to take shape on Love & Debauchery one cannot help but to notice the very particular and well placed samples or, as Hobart likes to call them, "tape voices" which he credits the term to legendary producer Ken Marshall. Where does Hobart get his ideas for the tape voices? He likes to watch horror movies with his trusty notebook nearby and document the film and the cue point and create wav files from the films. "Necrophile" opens the album with some very wicked swarming sounds with background voices that sound like children singing. The sample refers to sexual contact with a dead body. Other notable voice samples or tape voices that stand out can be found in "Strangler", "House Of Horrors", and "Love & Debauchery". "Necrophile" contains dialogue pertaining to Jeffrey Dammer, "Strangler" to Anthony Sowell, "House Of Horrors" to Fred and Rosemary West, and "Love & Debauchery" to Henry Lee Lucas. Each song is about that particular serial killer(s). Hobart continues, "To make a long story short, the tape voice or sample helps me get a song started. It is difficult for me to start a new song without one."

Musically, Precision Field relies heavily on building around those tape voices to bring out a very twisted and tormented sound that dwells in many places but typically stays away from a lot of obvious points of reference. Much of the vocals remind me of the harsher EBM styles while other times they are laced with some melodies in tracks such as "Hitchhiker", "Love & Debauchery", and "Fraternal Instinct". The music can be confusing at times. There are several moments where the songs break then move off into other directions. "Captivity" does that very well. The opening gives off a very sinister feel then shifts to something that reminds me of Esplendor Geometrico and reverts back to where it began. "Strangler" does the same thing with more of those dynamic breaks that separate the songs into different parts. This style in song writing parallels the very themes mentioned above. Nothing is black and white here. Its the complexity of the theme manifesting in the music. On one level it's chaotic and on another level it is quite controlled. The drumming resonated with me; I found it very intriguing and well executed. Not being a musician myself, I had to get more insight from a friend that is a drummer. He was impressed with the execution. A great example of this intrigue is found on"Feind" halfway through reminded both of us of a techno EBM beat with the drums pitched up a bit. I thought I was way off, but my friend said the same thing. So, I will go with that.


There is no comfortable place in Love & Debauchery. I feel this is the purpose. Looking back on the prevailing themes and influences such as love, murder, addiction, recovery and loneliness it would have to be set to an extreme form of expression. Precision Field delivers us that message in a very personal way by opening up to give meaning to the reasons for what the album is all about. It is not a shock gimmick or blind sloganeering glorifying taboo subject matter. It is form expression and story telling in a literal way as well as an allegorical way.  This is Hobart's way of exploring his life and paralleling it to something morbid and macabre to help emphasize the points. Everyone has their outlets. Some are straightforward and some are not.

It would hard to pinpoint what Precision Field sounds like. Fans of the classic and modern eras of electro industrial and EBM will certainly appreciate this. It has depth in every way imaginable. John Milton sums it up with this favorite quote of mine. "A dungeon horrible on all sides round, as one great furnaced flamed; yet from those flames, No light; but rather darkness visible served only to discover the sights of woe."

Bandcamp
Pride And Fall - Of Lust And Desire is available at POPONAUT from 13,95€