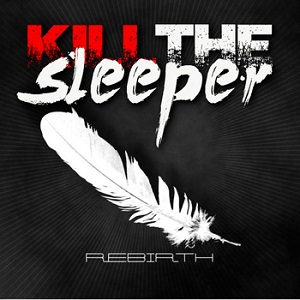 9.0
"Amazing"
N/A
Electroracle
Released 2014 by Juggernaut Music Group
Harsh EBM, Aggrotech
A tease has never been so great before in my life ever since I heard Kill The Sleeper on Fuck You - Enjoy! Vol. 1. After hearing their contribution to the free compilation, I've been awaiting a time when their debut album would finally rise to fame. And, thankfully, that time has finally come in the form of Rebirth, the one man band's solo project.

Behind all the music is none other than Kettil Sundberg. If that name isn't known to you, than you may have heard more of this man from his involvement in Project Rotten, or even his other alias known as Syndrome X/209.

Now, Kill The Sleeper is actually his new artist name, and his follow up to Syndrome X/209. Originally, Rebirth was released last year sometime as a demo, but was still a great sounding demo nonetheless. Before I could pick it up, however, it vanished from the internet. And, like a caterpillar cocooning itself, it emerged to the world once more, completing its evolution and becoming a force that was more complete with a better sound.

Already, there has been some bitching floating about the internet just because of the sheer aesthetics of this band; using harsh EBM and aggrotech as this base for construction, he decorates the floors of his project with emo imagery and lyrics, as well as surrounding himself in a stadium by somehow incorporating themes of baseball into his music. And, as weird as this guy may sound already, it's alright; I'm in love with the oddball qualities that surround this man's aura.

Now, Rebirth begins off with the ever hard hitting Watching The Snow Fall Again. The small intro we're presented with definitely fits well within a winter wonderland, but the shrieking vocals and trance like beat that hit later on show off a less timid setting. Reworked to be louder and more aggressive with guitar samples within the song, this is the definitive version of the song that you all need to hear.

Brushes Painting Hollow continues the fast paced beat of the album, egging on the trance like synths as well as a solid bass line filled with drops. It's a wonder that his shrieking actually works along with the rest of the song, but he somehow pulls it off, and he pulls it off so well.

Dropping the pace just ever so slightly comes Our Rusty Eyes and Tortured (The Lie II). They manage to still pack a punch, and roll well with the rest of the album.

And then we're hit with a collaborative song titled Another Sleepless Night which features Madman Seike, best known for his involvement in Kerbera and DIE/MAY. Putting in some piano here and there, Seikie puts in some vocals that contradict the shrieking that we've come used to. Not only that, but there's a really awesome part in the song where we're given some faded vocals, as well as a quieter beat around the three minute mark. Towards the end of the song, the two artists combine their voices together and sing with one another really well. This was one of the best songs on the album, to put it shortly.

Going back to working solo, I was brought upon The Words You Say Confuse Me So. More heavy beats and harsh vocals shrouded this song, as well as the next, Ketamine Candy And The Chocolate Dandy. The next real surprise in the album came with the interlude, Waves Over Egypt. A beautifully inspired piece, with slight static emerging in the background as well as minimal sound, it led directly into the next song featuring the main man from Freakangel.

Dmitry Darling, along with his voice, brings upon us a darker song with more downbeat electronics and influences from his nu metal sounds presented in Icing Is For Cakes, Not For Bands. The song comes off pretty creepy, and differs greatly from a lot of the other songs presented on the album.

High Fidelity is an instrumental song, and while it was good and moved from one direction to the next as a good instrumental should, I still found myself missing the vocals. Not to remain too upset at the lack of voice, the next track returned well enough with You're Destroying Me (Drone). I was happy once more, and then we finally got some of the baseball themes promised with Homerun. This would happen to be another instrumental, but, oddly, this time I wasn't missing the vocals. I thought the more rock-influenced sound of this song was great, and the drums within the song were stellar.

And then we move on into the last two tracks on the album which are remixes. Watching The Snow Fall Again was given the remix treatment by Heartwire. Not messing with the vocals at all, the main changes came to a less heavy beat that remained steady throughout. Cease2Xist was also present in the remix area, giving his touch to Our Rusty Eyes. Taking away the trance influences, the song came out heavier than before.

And that's where we come to an end of something great. Packing fourteen songs for a total run time of sixty six minutes, there is plenty to enjoy from this album. For a debut release from a man who has experience within the music field, it's not too much of a shocker that a good album would come from the magic loaded in his brain and fingertips. However, to expect something as good as this was far beyond anything that I could predict.

I've been saying that ever since I heard Watching The Snow Fall Again back in 2013 that the official debut of this project would be something I would look forward to every day of the year till it came out. That wait was worth it in every sense of the word. After listening to this album, and relistening to it, you can only feel a sense of freshness within yourself, knowing that something great has emerged from the musical touches of Mr. Sundberg.

Watch out, for this man has transformed himself time and time again, and his new identity has brought about one of the most powerful moments of the year.
# kill-the-sleeper
# rebirth
# juggernaut-music-group
Apr 06 2014
The Amatory Murder released "A Haunting" lyric video
Previous article
Roughhausen Offers 1000 free CDs.
Next article

BandCamp
Kill the Sleeper - Rebirth is available at POPONAUT from 7,95€