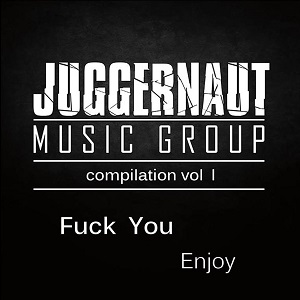 9.0
"Amazing"
N/A
Electroracle
Released 2013 by Juggernaut Music Group
Electro-Industrial, Harsh EBM
Alright, so, after switching from a promotional company to a label, was taking a pretty big risk that would only work if finances, reception, and fan appreciation were positive. And, from what I've heard, things have been going well. CDs are going fast, artists are being noted more and more, and as of very recently, they have released a free eighteen track compilation of the Juggernaut family. And I do mean family; the artists and their respected works featured on this album aren't all signed to the Juggernaut roster. Some are friends, and some just belong on the album because their music is quite simply amazing.

I mean, for starters on this free compilation, we are hit off with a Tactical Module track featuring IIOIOIOII titled Finding An Angel. If you have listened to either of these artists, you know that they are very fine chaps. And their music is even finer than they are. When you set the two down for a collaboration, you are pretty much met with a song that makes your nipples hard the moment the beat kicks in. The best way to describe this intro track is to say that it's IIOIOIOII's vocals cranked to a very dance centric Tactical Module beat. And, well, with this song kicking off the album, I couldn't wait to tear open the rest of this early Christmas present and see what else stirred within it's crevices.

I suppose since I began talking of IIOIOIOII, I should continue by saying that he takes a stand twice more. If you have read either of my flattering reviews of his works, you will know that I have fallen head over heels for his music. However, the two other stances he takes on the album are in the form of remixes; both Pittersplatter's Frozen gets a remix, as well as Machinista's Pushing The Angels Astray.

And, as much as I love IIOIOIOII, I have an equal hard on for Pittersplatter. This was another match made in heaven. The vocals from the original hit single are slown down, and the beat takes a much more soothing electronic sound. Then, pushing to the Machinista remix, we are given the synthpop vocals from the band, just with an IIOIOIOII touch pushing it that much further.

However, the final mention that I will make of the amazing artist behind all those I's and O's would be that of their song Weapon. Well, a remix of it done by RIOTLEGION. You're pretty much taking a nice song from the synthpop artist, and then handing it to a harsh electro band. After going through a meat grinder, you are set up with a pretty nice hamburger that just sits so well.

And, well, speaking of RIOTLEGION, let me talk of Providence, which is an original track from the harsh electro group. It's an instrumental, mind you, however, it's pumping, it's engaging, and it sets you on your toes. It's very noisy, but maintains a steady beat throughout the song. It's extremely fun just to get through.

Now, since I mentioned Machinista already, I suppose I can talk about their other stand on the album, in the form of their song Take Comfort In Being Sad, which is just a fantastic synthpop song that's very upbeat. It is really fucking eighties sounding, and I absolutely adored it. It makes me want to get in a time machine and hop back to the past just to fit in with the rest of the crowd.

So, let's look for another artist to discuss, and I suppose we can talk about Citizen 16 since this blend of a futurepop and harsh electro band is the third appearance on this freebie. Dismantle Me is just a fucking harsh song that smacks your right in the face, with such angry, screeching vocals to boot. There's not much reference to their futurepop antics in this song; I suppose this was written on a day when the artist was at his worst, but that works for the best for the listeners.

And then we are also given a second track, called Deception, from the same artist. It is a shit ton of fun, and is very catchy and dancey. Once again, we are served a nice slice of fuck you with screaming vocals and, well, if this is a preview of what's to come from this act, I just want it now. It sounds delicious.

Trekking forth into this brilliant release comes along beloved UK act System:FX with Inappropriate Touching. You cannot expect their standard electro-industrial endeavors they usually give off. This has much more of a tribal vibe to it, with the drums really standing out to me. However, there are enough electronics within the track to make sure it's still bouncy.

Rhythmic noise act Tapewyrm comes in at the fifth track mark, making sure to let all followers of the Juggernaut family know that while some may be soft, others harsh, there's still room for some noise. The thing that I love about this track is how it begins off low, but just slowly gets louder and louder until your ear drum is ready to just call it quits. You really just cannot escape this track.

Then we have Black Selket creep up on us with two appearances. One is an extended version of Saya Tidur from 2007. This is a pretty song that would definitely belong on a holiday such as Halloween. The main hook here is towards the four minute mark where this sci-fi like synth comes out of nowhere and grabs us in and makes my stomach turn, as if something horrible is lurking just around the corner.

His other stand is made at the end of the album, the last track being a remix of his collaboration with Stahlnebel by Cryogen Second, an electro-metal project. It had a lot of dub step influences to be found within it, but maintained a certain harshness to it that was pretty fantastic. However, I did feel as if the beat ate the vocals and didn't give them much of a chance to be heard.

But, continuing on in this freebie we are handed Eisdrive's Reeperbahn. While I didn't enjoy this song as much as the others so far, it was still decent. The EBM influences are clear in the song, but I suppose it was the vocals that I had a bit of a problem with. Feeling as if they were strained when coming out rather than just being eased out was a problem for me, but it was not anything major to make me rear my head.

We are set forth into the futuristic world of Kangarot. The song was quite weird to be honest, and hard for me to listen to. It's called Programmed To Attack, and while there is much noise going on at all time, I can't really tell whether or not I'm hearing really faint vocals or just more music. It was tough to get through, and I was a little disappointed as I have just picked up Nursery of New Stars, and liked it a lot. However, other than those complaints, I thought the song had a pretty good beat to it.

Okay, and the next project I'm actually very patiently waiting on for their next CD coming out early next year (I already have it preordered), but their name is Deadliner, and the track they contributed to this album is Animal Sentinel. It's a song that moves constantly. We are started off with minimal electronics, followed by a sample from what I believe to be something World War II related, then thrusted into some ambience, and are finally treated to a nice, hard electronic beat. It was a treat to listen to, does justice to this album.

Ex-Project Rotten, but now new solo project Kill The Sleeper takes his screaming emo imagery to the stage with Watching The Snow Fall Again. The synths go along very well with the screeching, and what was even more was that I was able to understand a few words out of the screaming when usually I can't. The beat is very fast, and fun, and, in all other words, I liked this song a lot.

Going a bit old school and traversing to that pure, sweet, hatred sound that we all love and know as hellektro comes Electric Breathing. You don't get much more sick and twisted in words as this angry man, but his anger is something to adore as he pumps out the music to just slam you on your face. You only get up after and ask for sloppy seconds.

And, well, hell's bells, I come to the last song on this compilation, which would be that of a remix. The song is called Nemesis, and it's original mix was done by the lovely lads over at Garten der Asche. However, the remix is done by the wonderful Ruinizer, who brings forth a harsh game and mixes their own talents very well within the realm of Garten der Asche. But, now I am done talking of the music.

To say that I have been kissing ass a whole lot in this review is something that I'm willing to accept; I honestly feel as if I've given out a shit ton of praises with little reasons to dislike this freebie. This is so close to the holidays that you just need to accept it as a gift. For no charge, you are being given eighteen tracks of pure adrenaline; each of the artists on this album have worked their asses off to give you a very warm welcome to the Juggernaut family. Some are soft on their words, and want to wrap you tightly in a blanket and put you next to a fireplace during the cold winter. Others want to rip your clothes off, cut you with razorblades, and throw you out into the snow to freeze your balls off. However, whichever path is chosen, you'll still find yourself in a wonderful melting pot of industrial perfect for introducing yourself to a dedicated team of artists.
# juggernaut-media-group
# tactical-module
# citizen-16
# stahlnebel-andamp-black-selket
# riotlegion
# ruinizer
# kill-the-sleeper
# pittersplatter
# machinista
# tapewyrm
# cryogen-second
# iioioioii
# systemfx
# eisdrive
# kangarot
# deadliner
# electric-breathing
# garten-der-asche
Nov 26 2013
[de:ad:cibel] - 'Globalized'
Previous article
New single and video from Delaykliniken
Next article

BandCamp
Various Artists - Paris/berlin: 20 Years Of Underground Techno is available at POPONAUT from 22,95€

Various Artists - 'Uturn 3: The Dark Side Of The Beat'