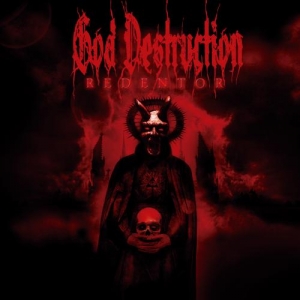 9.0
"Amazing"
N/A
Electroracle
Released 2016 by Insane Records
Harsh EBM, Black Metal
Album of the Year #10 2016
Do you feel that? The Earth's crust is cracking open. The skies are filling with ash as the smell of brimstone spreads in the air while hellfire and ancient Satanic demons are awakened from a deep slumber. The damned throne of the vicious menace that has brought Hell-on-Earth rises from the inferno as steps lead down to magma filled pits. And up these stairs rises the three Kings of the Underworld, giving their unholy damnation to the world through shocking harsh EBM and eviscerating black metal. These three otherworldly demons are known as God Destruction.

God Destruction initially launched their career in 2009 but really started when they released Satan Before To Destroy The World and VI:VI:VI in 2010, both of which were demo tracks. Nonetheless the demos were powerful enough to draw the attention of fans and critics alike, allowing them to get signed to the now defunct Engraved Ritual for their 2012 hit album Illuminatus. Not only did the album mark the huge uprise for the Mexican outfit, but it also marked one of the most important albums in the Harsh EBM/aggrotech scene. The songs were long and brutal, but had five to six interchanging segments per song unlike the constant dance loop that still plagues the scene today.

After Engraved Ritual fell down off the face of the Earth and God Destruction were planning to release yet another album, they were approached by another now-fallen label: Juggernaut Music Group. With attention already on them, God Destruction released Novus Ordo Seclorum through the label. The album was much more raw than their previous efforts, really homing in on black metal inspired anthems. Another two years has passed since then, and God Destruction are ready to give birth to another antichrist: Redentor.


Their third full length album almost takes them back to their roots, but still keeps in a raw black metal edge. With eleven new tracks full of occult themed venom, God Destruction is back. 'Redentor' kicks off the album with a familiar organ sample that's fucked with and has eerie ambient backing, as if it belongs as the theme song to film in The Omen series. It doesn't take long for the Imperor to bring along his demonic voice into the battle; he's still angry and pissed and looking to destroy the weak and hurdle the dead. It is also important to note that God Destruction has not forgotten how to keep their songs constantly moving no matter how long they go on for; every minute or two, something new happens in the track that keeps you attached to it.

'The Machine' kicks in next, focusing on a steady but ramming EBM beat. Angelic chords will filter through the song, but that's all in empty hopefulness. There is no escape from this apocalypse. 'Ratzinger' comes in next, continuing the dance beat that 'The Machine' brought in. This time, however, the vocals switch between glorified aggrotech screaming and more metal bouts of shouting. Around the four minute mark, the song comes to a crawl to allow an equally faith crushing mix of cinematic noise, cut guitar work, and electronics to come forth.

The very bluntly titled 'Bullshit' came on next and plays out as one of the more straightforward songs on the album. You can still expect all of God Destruction's shenanigans to play out, but this track seemed like a continuation from both the previous two songs. The intro of 'Corpus Satani' played out as if it were going to be an extremely heavy metal song, but a neat breakdown transfers the song into another riveting song for dark dance floors and occult gatherings.

'Kakuma (The Unholy Land)' is one of the best tracks on Redentor, and also ranks as one of my favorite songs that God Destruction has ever produced. The thumping bass, John Carpenter like work on the keys, and the perfect blend of Holy sounds and samples are fucking stellar. The synthwork perfectly hits the mark each time they blast forth, and the intense vocals sound fucking fantastic on this track. I honestly have not been able to keep this song off my mind.

My second favorite track on Redentor actually came next with 'Thunderthrone'. This is the first song that combines the grace of God Destruction's heavy electronic mechanics with some fucking amazing guitar and drum work. This song was almost built for fans of God Destruction who prefer metal over electronics. This is the type of song that I would love to see played live; I really fucking hope God Destruction some day makes it to the States. Plus, when the guitar comes alive around the three minute and twenty nine second mark, I nearly had a heart attack.

But, without further ado we were brought back into the harsh EBM world with 'Exterminio'. These Mexican chaps know how to make dark electronic music and know how to liven up the scene. I was really getting bored with a lot of the music that has been coming out lately in this general genre, but God Destruction has brought me back.

Going back for the industrial metal feel, the Satanic trio mixed industrial with dance with 'Ultraviolencia'. A lot of people have scorn for this genre of music, but I fucking love it. Whether you're in the mosh pit or out of it, you can dance or swing your fists and hit some poor bastard in the face. Hopefully they'll deserve it.

Moving back to a slower pace, 'Rotten' played out next. It was really interesting how God Destruction went for a growling, spitfire lyrical delivery with the song. It worked extremely well and I would love to see this used in more songs. 'Antevasin' slammed in with the last song, and it sounded as if this is where the Three Kings of Hell decided to descend back into their lair. They had enough of playing with mortal lives for one day, and now they're going to retire back to their dungeon for more nefarious plots must be drawn out. The majority of the last half of this song is instrumental, but it was absolutely grand.

However, the ride doesn't end there as three remixes are available for the album. The first of which is Nero Bellum of Psyclon Nine's remix of the title song. A new focus on echoing effects, a slight ambiance in the air, and Nero's amazing work with drums all gave this song new energy and life. When two Demon kings collide, this is what happens.

I would like to call Sin D.N.A's remix of 'Ultraviolencia' just a complete industrial overhaul. The song is ridiculously experimental, and every single time you think it's going to go in one direction, it completely switches and marches off somewhere else. You might get a little frustrated upon first listen, but you'll learn to love it one way or the other.

The last remix that's available as a digital bonus only is label mate Thornsectide's remix of 'Redentor'. For those of you who didn't get enough dirty dark electro on the album, Thornsectide is here to make that dream a reality. While technically this remix does not stand up to God Destruction's quality - or the other two remixers quality by that matter - they still managed to give the song a new direction, so it's worth at least one listen.

So now that the Unholy Gods have crept back to their crypt for another slumber, I can only imagine what God Destruction will release upon the masses next. I was kind of doubting that God Destruction would be able to create three near-perfect albums in a row, but I was wrong to have that doubt. Not only have they released a third consecutive exemplary  - and most likely award winning - album, but they have brought my interest back to the harsh electro world. And for this, I award God Destruction's Redentor a solid 9 out of 10. They fucking earned it.