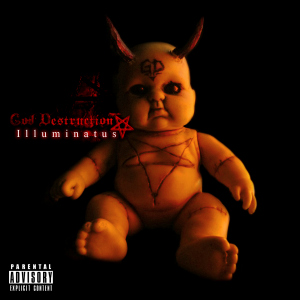 Spotify
Released 2012 by Engraved Ritual
Harsh EBM, Black Metal
Album of the Year #4 2012
An introduction to Mexico's "God Destruction" is a daunting task. Consisting of 'Satan Imperor", God Destruction is a Harsh EBM act that utilises aspects of Black Metal to form a truly unique project. Satanism is the main thesis here, and the connection to Black Metal becomes clear from the very first look at the song titles. Earlier demos "VI:VI:VI" and "Satan Before to Destroy The World" (sic) are well heralded, prompting the signing of this act, and the approach of both styles has embedded something of a positive imprint among the audience - word actually has it that this debut is one of the most anticipated in years.

Now, the album art is likely your first point of reference. This has seriously startled me - it may look like a cuter version of the inhabitants of "Isla De Las Muñecas", and it may generate a few snickers, but the undertones and satanic connotations are rather cool, even if it's lost on the non-blackened.

Opening with "Lvzbel" (Replacing the traditional "U" with the occultic "V"), the title track literally means "Lucifer". It starts off with a sample that you'd not expect, referring to the immediate commencement of "Sound Systems", then builds into a wall of extremely fine synthwork. We don't get to hear the vocals of Imperor until 2:30 in, but they strike me as 'Divine Infekt' era Nero Bellum meets Black metal. It's done really well, and it seems to take the evil concepts of the latter with the mesmerising hooks of a genre rooted in the Trance scene.
This reminds me of early Dawn of Ashes, which coincidentally this album was referred to recently. Some have even said it's the most important album to hit the Aggrotech scene in years.

The other thing that's hit me hard while listening is the sheer length of this - the album is 90 minutes long, with almost all tracks being at least 5:30 in length.

"Non-Human" is blisteringly fast and heavy! When it kicks off, it has to be at least 170bpm, Imperor's vocals are coherent and clearly full of hatred, and it's met with numerous changes to pace, melodic synth melodies, and vocals that would not be lost at a Beherit show.
At 2:04 the song changes radically, and I feel the same way for this as I did for "The Crypt Injection" the first time I heard it. I'd have had a horrid time reviewing it, and this is testing all of my vocabulary and ability to really convey accurately.
The musicianship is truly era-defining, the song breaks so many taboos - I've not heard an Aggrotech song with 6 (count them) seperate sections and changes that I can actually recall, and the trend of repeating the same loops has been brutally murdered on this release. I can honestly say that this artist has a scary amount of talent.

"Become Death" kicks off with some buzzsaw Guitar played over a choral-like section, and it's quite haunting to hear. The Metal elements on this album are very minor, and they're evident, but never to a level where the Guitar drowns anything out. It's another nod to the talent of Imperor to both make brand new and unique sounding Aggrotech, AND bring a Metal genre into the mix without alienating a single person. There's even a Church Organ on this track, and it sounds fucking evil.

"In Nomine Dei Nostri Satanas" has one of the most melodic loops on it, and is the track that I walk away from Illuminatus remembering the easiest. It has an epic intro that builds into one of the tracks of the decade, and although the Satanism ideals may put some off, this is in fact one of the most important albums to ever grace the Aggrotech / Dark Electro annals.

My favourite track "Anticristo" (previously heard on Synthetic Rage vol..1) is next. It heavily samples "Devil's Rejects", starts off with a synth bit which is actually the main riff of the track, then builds into something truly beautiful. It's Seven minutes long, and is built around a recurrent Guitar riff that I can't get enough of hearing, the Devil's Rejects samples are frequent, and Imperors vocals are perfect on here. The main chorus of "Soy El Antricristo" ("I Am The Antichrist") seperates the two prevalent sections of the song, but there is something truly hellish about the track that literally has had me play it twice daily for months. It's probably the track that has the most Metal influence in it, but at this point in the album, no one can even stop listening if they want to (Unless they're a Christian or have no interest in Aggrotech).

"Illuminatus", "Prometheus" and "Emperor" do not even drop the quality one iota, and manage to somehow sound sicker and sicker than the preceding tracks. "Armageddon" rears itself as a candidate for best track with brutal riffs, synth that is heavy as possible, and some female vocal work.

"Son Of Satan" and "Across The Light" close the original album, with the latter seeming particularly relevant as a closer due to it's title and lyrical content.

Remixes by Reaxion Guerrilla, Stahlnebel&Black Selket, Mas-Si-Osare and VoiXnoire show how serious this release is, but by the time you've got to them, your mind is likely shot. The mixes are truly great, but this album elevates itself to a higher plateau.

It's easy to overhype, but everyone who is pushing this album to the heirachy of Dark Electro is right. I wondered a couple of years ago when someone would combine Satanism with Dark Electro, and they've done it. They obviously figured there was a gap for it too, and it's selling.

This truly will go down as one of the genre classics, and it will redefine the scene. I guarantee you'll see more bands doing this Satanic thing shortly.

The freshness is back, the talent is back, and quite honestly, the scenes just been given CPR.

Satan really DOES have the best tunes.

I honestly didn't know what score to give this - I give too many 10s and don't want it to lose its meaning, but this album has done too much in too short a time to warrant anything less. May 07 2012
Electronic Saviors Creator Needs Help With Medical Bills
Previous article
Various Artists - 'This is What We Call British Industrial'
Next article

We don't have any stores registered for this release. Click here to search on Google
God Destruction - Redentor is available at POPONAUT from 13,45€