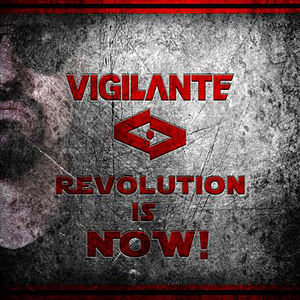 6.0
"Alright"
N/A
Electroracle
Released 2012 by Synth-Me
Electro, Industrial
Ivan Munoz aka Vigilante is a industrial music artist from Chile, who is well known for mixing electronic and metal music. 'Revolution is Now' is a remix album released to coincide with Vigilante's 'Revolution is Now' worldwide tour which finished at Castle Party on 27th July 2012. The release is on the label, Synth-Me, and is the result of collaborations with musicians from Europe, USA and CIS countries as well as being dedicated to the tour of the same name.

"New Order (Child From The Crypt RMX)" brings a beginning of organ sounds and echoing vocals, then great piano and synth sounds and drums to the fore. A nice build up to the main vocals, with all these previously described sounds as a background. Of all these sounds it is the piano notes that make it special and so different. Mellowing the original track in an effective melodic way, but leaving enough aggression for it to remain as a good dance track. "New World (Aktivehate RMX)" not surprisingly is a very dramatic and vicious dark electro dance remix and a good one. Lots of techno beats to ensure it fills the dance floor. Features some very clean and clear vocals.

The Russian Ultimate Soldier brings a more Electro-Industrial sound to "One Good Reason (Ultimate Soldier RMX)", but fails to build on what is a great track. Too complex and all over the place. "The New Order (Mono Mix by Carphax Files)", has a miserable start but eventually the beat builds up into a decent industrial mix, the great guitars are what makes this a good track and still breathes life into the remix.

As for "Hardcore (RMX by Perfect Symmetry)", all I can say is 'No, No, No! ' What the hell is this some kind of experimental punk where lyrics are not supposed to fit with the music at all. I would hope that our next band also from Hungary would do a lot better in "One Good Reason (Chile Steel Module Mix by Impact Pulse)", but unfortunately not, the vocals sound atrocious and the music is only a little better. I now have to go and lay down and listen to the Vigilante original.

The familiar heavy drums and noise of Diezel Xzaust follow with "The New World (Diezel Xzaust RMX)". A rhythmic Russian banging frenzy, which although it makes some odd twists during the track particularly when the synths are brought to prominence still retains a hardcore dance beat. We follow with another remix of the same track "The New World (Totten Mechanismus RMX)" again from Russia. From the start great synths and drums make for a great rhythm, some very nice lines giving a dance sound and beat. The vocals combine with more of those synth lines to ensure another good remix. Two excellent remixes in a row of "The New World".

"Hardcore (Vocoder Rage Mix by Bleak Freak)", not much doubt about what at least part of what I have coming. Nikita Bleak brings a dark electro charged with trance sound to the track. The vocoder use is done well and it does rage through the decent vocals, the guitars are good but the contrasting synths just don't work for me and sound weak. "Still Alive (Red-Line RMX)" comes next from what I believe is the same artist(s) as Child From The Crypt. Features from the start clear harsh vocals, with a very different and unique sound. Not a question of having a great voice but using what you have got to your best and full advantage. There is really no reason to mention the music as it's all about the vocals, but the music subtlety supports them very cleverly.

"The New Resistance (Dazzling Malicious RMX)" starts with some drone sounds and then we have the usual sample followed by some experimental sounds, still droning but to a less extent and we carry on like this all the way through against the good vocals. Sounds like they took the vocals and then just hung some things around them. "Still Alive (Anthracitic Moths RMX)" fill my ears once again with wonderful orchestral like synths, then vocals building up into a good dark electro remix with an element of trance to turn it into a possible floor filler, helped by the lyrics and chorus.

Our next remix "Hardcore (Tatlum RMX)" is by the Russian rhythmic noise artist Tatlum. It may be called rhythmic noise but to me is far too abstract, lacking structure and has no recognisable beat, at least not one I would want to recognise. Hardcore (Terminal Zero RMX) brings us an aggressive industrial metal remix. If you like your music fast and furious you will like this one and feel the rage.

Our last remix "The New Order (Type V Blood RMX)" is by the Kaliningrad based duo Type V Blood and completes our album, again the industrial metal sound and guitars of this excellent track is of most prominence along with the vocals. It has been tweaked here and there without ruining it, but as for adding to it I can't really find much.

Conclusion:
I recommend this album for Vigilante fans, and for industrial fans I would say give it a try as you will find something you like especially as it's supposed to be a free download. But from what I can see the label's site at Synth-Me.Ru is currently down. Very much another love and hate album and there are some really good and interesting remixes on here. If I have to pick two it will be "The New World (Diezel Xzaust RMX)" and "Still Alive (Red-Line RMX)" .

Vigilante has made some good albums and is able to mix electro and metal together and at least this ability still shows through and saves several of these remixes from oblivion. So I really don't think doing this was a step in the right direction. My advice is that if you own some good music don't let other bands murder it just to fill up a remix album.
# revolution-is-now
# vigilante
# child-from-the-crypt-
# aktivehate
# ultimate-soldier-
# carphax-files
# perfect-symmetry
# impact-pulse
# diezel-xzaust-
# totten-mechanismus
# bleak-freak
# red-line-
# dazzling-malicious
# anthracitic-moths-
# tatlum
# terminal-zero-
# type-v-blood-
# industrial
# aggrotech
# dark-electro
Jul 30 2012
Linekraft - 'Bouryoku Kikai'
Previous article
A Thousand Societies - 'Le Crepuscule Des Idoles'
Next article

We don't have any stores registered for this release. Click here to search on Google
Vigilante - The New Resistance is available at POPONAUT from 13,95€