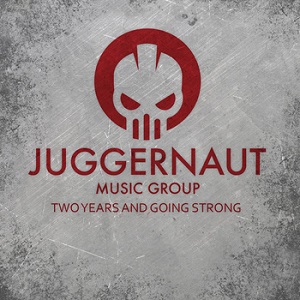 8.5
"Great"
N/A
Electroracle
Released 2014 by Juggernaut Music Group
Electro-Industrial, Harsh EBM
In a nice little way to thank fans for their loyalty and support throughout the past two years, and also a way to show off new and upcoming material from their roster of talented artists, Juggernaut Music Group announces their second free compilation album, Two Years And Going Strong. This seventeen track set list features already established artists on the label, some who've released full length albums, others with only EPs and singles, and then there are a few you just haven't heard from until now. Anyway, this does show off a pretty bold future for Juggernaut.

Both looking like a man straight out of MIB and also creating some lovely and catchy synthpop, Voicecoil hits nicely with Clear. A steady rhythm flows out nicely, his voice soothing over the words. The bouncy beat isn't too hard on the ears, which allows for both a dance-friendly track, or even something you can sit back and relax to.

Dreams Divide, with their alternative dance music, does their hardest to change the pace of things by allowing Our Creation to really beat out a catchy tune that allows plenty of bass to pass through your speakers. When singing on their own, both of the vocalists sound nice, but during the chorus, when they come together in harmony, they sound even better.

And, if IIOIOIOII didn't make an appearance on this compilation, I would have cried. Thankfully, my tears can be saved for a much more tragic situation, as he came in with Face Them All. Light hearted, chimes about, and a soft layer of synths make for a lovely track. I felt as if his voice was slightly off in the song, but, still, that's barely a scratch in this diamond.

And, while last I heard from Citizen 16 I was delivered really hard and biting dark electro songs on Fuck You - Enjoy! Vol. 1, I got more of a half-and-half effort. The screeching vocals are still there, toned down a bit more, and the synthpop inspired vocals followed shortly. It was like songs such as Dismantle Me and Leaving got together and had a wonderful love child. Two different genres submerged into one great track to a fantastic result.

One of my favorite instrumental acts Deadliner came into play next with Finally, Sky. A pretty good overall EBM sound that moved on into some industrial mechanics with various noises and static coming in to play as well, this was another winner for the one man band.

C16 and IO decided to work their talents together to create M80. And, just like the firework that explodes with a loud noise, this song deserves a lot of attention. I must compliment both artists for implementing the best of both their worlds into one hell of a song.

However, the time for lighter tracks was over, and now we get into the heavier shit. Electric Breathing kick started this section with Chaos. His dark electro sounds hit nicely and his vocals are fairly changed from his most recent release. Not necessarily completely different, but not as clear cut. It's almost as if there was a bit of a quality dip. It should be mentioned that both songs that are from him on this compilation are from an earlier release; though, the tracks are remastered.

You should also give a hearty welcome to electro-industrial act Renoized; they make an appearance with Defcon. They bash you in the face with their distorted vocals, harsh synth works and an overall "fuck you" sort of attitude. Sounding a bit politically charged based on the intro sample, if there is a message, it's certainly being delivered through sound alone.

Based in the same state as I am, the ever lovely Pennsylvania, Cryptic Dawn punches out his self-titled aggrometh with the help of Imminent Violence. And, boy, if this guy doesn't sound like a demon on meth, I don't know what does. The vocals are heavy, and typically found in industrial metal acts, well, cyber industrial metal acts. But, with the exclusion of garbage in his material, the vocals come out nice. Plus, there's also whispers to balance out the demonic voice.

And then Electric Breathing makes another appearance, this time with Dead Body Erection. Major points for using a sample from The Shining in the first place, the song takes a distorted turn. It was hard for me to believe this was him, sounding like an almost early effort from one of his previous albums.

Cryptic Dawn comes in with a second appearance as well, this time alone to show off what he can do on his own. Slower, more garbled and fucked up vocals take the stage with more focus on the actual vocal work rather than the electronic work surrounding it.

Australian based AR12 teamed up with Pete Crane of Shiv-R to create Play Thing. A nice simple beat forms and keeps up for the majority of the song. A bit of a breakdown comes around the two and a half minute mark and continues pace for the last minute or so.

Venal Flesh made a lovely turn up on the release with Grotesque (Pre-Surgery Mix). By far one of my favorite tracks that they have pulled out, the drum work along with the synths perfectly complimented the unique voice that follows through.

Imminent Violence also makes a showing on his own with Before The Storm, an instrumental that really has a good piano line going for it. It throws off from the main course with segments that break the standard, and it all works to the song's benefit.

And, holy fucking shit, Ruinizer just slammed out a great remix of Tactical Module's Before Crisis. At first passing through with some electronic work that riffs in and out following the lead of the vocalist's chords, a lighter electronic work slowly leads into the main bulk of the song. And, at around the minute and a half mark, a beautiful electronic set is hammered out. This definitely turned out to be a favorite of mine on the album.

And, finally, to end things off with lots and lots of rhythmic noise, Tapewyrm delivered Sacrament, an eight and a half minute track that keeps you engaged throughout its duration. It sounds as if there some Holy chanting going on in the background, and that just adds onto the hellfire that's brought before my ears.

And that's where this teaser ends. With so much talent compiled into an extremely strong list, the first half serving as the lighter side to the darkened second half, Juggernaut did another great job introducing the crowd to more artists. I really have nothing bad to say about any of the songs presented here; some became my favorites over others, but each artist came out guns blazing, and hit the bullseye each time. I look forward to these artists, and the future they have with the label. Juggernaut may have existed for two years now, but they're not stopping; they're just feeding more steam into an already enraged beast. And its hunger is growing.
# voicecoil
# dreams-divide
# iioioioii
# citizen-16
# deadliner
# electric-breathing
# renoized
# cryptic-dawn
# ar12
# venal-flesh
# imminent-violence
# tactical-module
# ruinizer
# tapewyrm
# juggernaut-music-group
# synthpop
# futurepop
# industrial
# rhythmic-noise
Aug 01 2014
Microwaved - 'At The Heart of Death'
Previous article
Severe Illusion - 'Deliberate Prefrontal Leucotomy'
Next article

Bandcamp (Digital)
Various Artists - We Heard The Call is available at POPONAUT from 15,95€

Various Artists - 'How to Influence and Destroy'

Various Artists - 'Fall Is A House Of Gold And Rain'