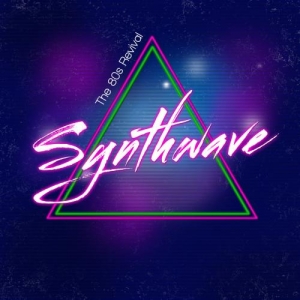 
The synthwave scene has some of the most passionate projects I have ever seen in my life. The 80s fueled retro and synth driven electronic field targets to hit everyone with nostalgia and encourage the newer generations to discover music, literature, movies, and ideals from about three and a half decades ago. Whether they're targeting the enormous synthpop hooks of classic Depeche Mode, bringing back the dystopian cinematic scores of Blade Runner or Alien, or simply shredding on an electric guitar, synthwave is always a blast to get through.

Record label Kiez Beats is one of the many bridges bringing together the old with the new, They've brought about multiple Synthwave compilations in the past and as of today's date they have a total of five altogether. While I have yet to listen to their past releases Kiev Beats have served a phenomenal and sentimental tribute to the synthwave scene with Synthwave (The 80s Revival).

As you can guess, this is another compilation of some of the best Synthwave, electrorock, and otherwise 80s inspired musicians and bands out there. With a total of seventeen tracks that last well over an hour this is one of the best, crisp, and dance worthy synthwave compilations I've experienced in my time.

Synthwave (The 80s Revival) could have chose any track to start me off with and I would have been hooked, but they went ahead and really glued my headphones to my ears as Dana Jean Phoenix kicked off the compilation with her track 'Le Mirage' off her sophomore album of the same name. Whether it's her voice, the soothing guitar in the background of the song, or the melodic electronics that soothe the soul, 'Le Mirage' is a gorgeous song to life itself.

Up next came disco, funk, and new romantics producer Lachi James. While I never heard of the man before, a quick Facebook search brought me to a white suited stud with some of the best hair in the world. Chorus effected vocals as well as optimistic, romantic music followed through. The duo known as LeBrock came up next who curated a wonderful electronic rock/pop track in 'Call Me'. Their vocals were perhaps the highlight of the song; it's rare to see talent such as this appear in the modern day.

In similar territory as LeBrock came Magic Dance. Their electric guitars and otherwise dance friendly attitude was stellar with clean and handsome vocals that would make any 80s fanatic melt. The man known as Aviators stepped in with a huge nod to Depeche Mode with his track 'Oblivion'. Though perhaps not as crisp in production as the previous songs, Aviators can still kick it on this compilation as well as any other.

With a slow build up and crawling electronic lines, Michael Oakley slowly sank his synthetic fangs into my flesh and once more brought me into a dreamy soundscape. This song may not be as loud as the others, but what Oakley doesn't have in noise he makes up for in addictive, sweeping synths. Well done.

Any fan of the synthwave scene needs no introduction to the juggernaut that is Futurecop!, but his song is a love letter to exactly what the title states: '1988 Girls'. Whether the project is referring to celebrities such as Enya or Gloria Estefan or just the general look and style of 1988 is unknown to me, but what I do know is that Futurecop! created an extremely fun instrumental track with '1988 Girls'. Digital, electronic, and all retro. Fantastic job!

Up next came SelloRekt /LA Dreams, a solo producer/musician who began practicing piano at age 8, started with a guitar at 17, and many years later created this glorious song known as 'Waves on the Pacific Coast'. Good percussions, light synths that have me wondering what the sunset on a Miami beach would look like, and an overall upbeat attitude made this song a keeper.

Getting back into the synthpop/rock field came the trio Beautiful Machines with their song 'Real Love'. Snuggle up close to your loved one and let this song cheer you on through foreplay as it is that enticing. Handsome vocals hit all the right notes while electronic blips produce that pitch perfect 80s sound.

From out of Culiacán, Mexico comes the synthwave/pop solo artist known as Saffari. This is another slice of instrumental synthwave perfection, and the song even has a significant sound style that once again reminds me of coastal pleasantries. Getting down with electrorock once more came two projects Pengus and Perfect Science who collaborated on one song. Be prepared for two things when entering this song: lots of synths and lots of guitars.

Based out of India, the duo Dreamhour contributed their track 'Retreat' which features the talent of electrorock/funk project Heclysma. While the synths and guitar will remind you of previous projects already experienced on this compilation, there's an undeniable tropical edge this band brings out with the use of their Cajón - or at least what their able to make sound like a Cajón off their synths.

One of the smaller and unknown projects on this compilation Mr. Maen proves he has what it takes to run with the big leagues. While not innovative, the Norwegian producer's sound takes a lot of liberties with his synths going to the far reaches of the Galaxy with his track 'Timmy Goes to Space'.

The next song is from a project called Scandroid whom I've covered in the past. That being said, I believe the majority of Brutal's audience will recognize the name Celldweller more than they do Scandroid. I only mention Celldweller as the electrorock producer Klayton switched from his normal routine and began a synthwave project under the name Scandroid to celebrate his love of all things 80s. 'Neo-Tokyo' not only reminisces all of that, but it may also be a huge reference to the manga/anime Akira as the classic cyberpunk film takes place in Neo-Tokyo. Either way, it's a job well done.

I giggled at the sight of the name of the next band Powernerd as, well, it's a funny name. Nonetheless this trio of electronic musicians who use homemade midi-guitars and controllers established another synthwave song that sounds part dreamy, yet partially as if it's attempting to launch me beyond the Earth's atmosphere.

Next up came a huge electronic score that took no time to get comfortable and this was brought about by 80s enthusiast Street Cleaner. I don't think there are any actual instruments in this song but I don't care. The more electronics the better, and this song is overflowing with synthy goodness. The last project to appear on the compilation was Crockett and his song 'City of Ghosts' was perhaps properly placed here for good reason. The song is soothing, beautiful, and encouraging, and is a right way to send off the listener.

With more time than I expercted listening to and writing about this practically perfect compilation, I can only say so much more than I already have. Whether you're first discovering the genre or already a huge fan of synthwave, Synthwave (The 80s Revival) has something for everyone. Whether it's beloved heavywiehgts such as Dana Jean Phoenix or Futurecop!, to the little guys such as Street Cleaner or Powernerd, this is an essential listen in the synthwave genre. Get ready for a turbo charged ride that will bring you to a futuristic past!

Bandcamp
Various Artists - Cyberworld Ii is available at POPONAUT from 8,95€