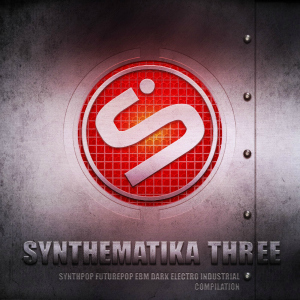 7.0
"Good"
N/A
Electroracle
Released 2011 by Synthematik
EBM, Electronics
Synthematika 3 is the third instalment of a compilation series focused on highlighting lesser known names in the synth/industrial scene. It includes 37 tracks, almost 180 minutes of synthpop, futurepop, aggrotech and industrial music bringing together artists from Russia, United Kingdom, United States, Ukraine, Germany and other countries. The compilation contains a lot of previously unreleased tracks as well as special versions and exclusive material.

The compilation starts so nicely with the Russian/Moldovan band Unity One and "Infrared (SNTK3 Version)". However, I think this track could be much better if it was polished a little more. In all, a wonderful 'futurepop' dance tune. We continue with the UK's Antiscion, and "Overthrown", interesting futurepop with somewhat abstract synths, this one grew on me. If I have any criticism, once again I think it could be improved on. Dreams Divide also from the UK follow with "Puppet Love", a quality track well produced, catchy melody, highly danceable beat and great vocals from both band members. Once you hear this one, you don't forget it.

The Moldovan Alexander Gladky then entertains us once again, this time as Alpha Point, with "High like the Angels (People Theatre's Total Recall Remix)". An immense remix of the futurepop/synthpop track by People Theatre, it's what Peter does with so much class, great for the clubs. Spilstar a one man project from Denmark bring us a classic sounding synthpop tune, real 1980's material, very nice vocals and well produced.

A real change was the Russian, Requiem4FM with "A Night in a Coma", an electro track with a more rock sound than any previous, a nice melody with some good clear vocals. This kind of leads us in to the wonderful "loving wrath" from the Canadian for all the emptiness. It drives, it beats and pulses and the vocals are outstanding, as are the thought provoking lyrics. Despite the subject matter it is completely danceable too and possesses a very uplifting sound. It won't be easy to follow that.

However the German electropop duo, Vainerz with "I Try To Be (Synthematrix Mix)", do quite a good job of it, but it sounds uneven with changing levels in places and once again I think needs to be finished properly. Israel's Observe & Control deliver "Rain" so well. A danceable dark-electro/industrial track, and very much one to sing-a-long too. Very different and quickly turning into my favorite track of the album so far, quite an achievement in my view, considering "Puppet Love" and "loving wrath" have gone before.

The Polish band Black Canvas deliver the very nice "Pyromaniac". Melancholic sounding while the synth sounds still give it and retain its beauty. It has gloomy sounds and wonderful cold vocals which fill a room. The track is now very much a favorite of mine. I am finding some great surprises on this album, and that is what I love best.

Per Aspera from Russia "Find Yourself", features Mental Discipline, and brings us back into the land of futurepop/synthpop with for me the expected good vocals. Dust Heaven from the Ukraine, continue with a similar sound "Doublefaced", but with adorable female vocals. Good electronic music and still retains a dance beat. I fell in love with this one.

The album then brings us another change in the form of German band P24 with "Lichtjahre Entfernt (Mr. Bouvain Remix)". The Mr Bouvain I presume being that of Vainerz. A great danceable heavy beat electropop track and remix. Technomancer from Norway follow with "Artificial (SNTK3 Edit)", with an excellent techno-synthpop sound. The influences of Technomancer's fellow countrymen Apoptygma Berzerk are very apparent here.

Things get quieter and slow down a little, as E-gens from Russia bring to the compilation exactly what they aspire too, in the melodic "Holy Dreams". In my opinion it's beautiful and mysterious synthpop. I then find another favorite immediately from the first beats from the Ukraine's Ginger Snap5 and "Shadow gHost". This is great electronic dance-floor music.

Cold In May from Belarus, with "Kill Yourself with Pain (Mental Discipline Remix)", left me almost speechless. It's melody is beautiful, as is it's darkness. The penetrating vocals are also at a perfect level. Pattaya Memorial House, "Bullet for a Ghost" follows, a techno instrumental track with several changes. It would be ok in the right place but I am not sure this compilation is it.

"Till I Get You" by Mind:|:Shredder of the Ukraine, deliver our first taste of aggrotech. Another track to take note of, with a great dance beat. The UK's Cyferdyne follow with "Nova (SNTK3 Edit)", a noted track once again from what I think are one of the UK's best industrial bands. Sleetgrout from Russia continue in a similar vein with a good dark-electro track with "Dance like Joke". Maybe my dancing is a joke but this track isn't, and it is once again a great dance track like so many that have gone before.

Fabious Corpus Act of Belarus and "Morality (SNTK3 Edit)" bring us a highly rhythmic electro-industrial track. The UK also adds to the compilation Cease2Xist with another electro-industrial track "My Burning Rage", we get back on the dance-floor with this hard hitting sound and I rate it highly. The Polish band H.Exe, add the very harsh-electro sound of "Infinity featuring Digital Angel." Sounds very Grendel and Psyclon Nine inspired but that is fine by me.

Russia's Zweifelhaft, "The 5th of November", is a very definite TBM/Industrial track, continuing our procession of mostly dance-floor fillers. Lthrboots from the USA adds "My Salvation", an excellent industrial track, and check out the YouTube video for this one also, with acclaimed video producer Jeff Adair (Ludus Studios). "My Salvation" is in one word - Quality.

Universally Unnecessary are also from the USA, bringing to the compilation their quite unique brand of industrial-rap, this is one of their best, Ryan M delivering some good vocals in different styles, and Cory L some great beats. But once again there are some finishing touches missing. This is something very noticeable on this compilation.

We continue with more industrial sounds and harsh vocals by the Ukrainian, "Thorn Drive's "Keepers of the Dawn". This really for me didn't do anything for me, vocals are not bad, but the nasty synth sounds drowned them out far too much. Next, the electro-industrial band Outside from the UK with "Function", again I am feeling disappointed. Too rough for me and missing the cyber sounds of some of their other work. Another electro-industrial band Liquid Red from Russia add, "A Step Closer (IN[TOXIN] Mix)". Again not for me, it's choppy and rough. I am now pleased to hear the dark-electro sounds of Hyperhate, from the Ukraine with 'Hate you!? This could do yet again use some polish but very promising.

With the German Mind.Area and "Insane (SNTK3 Edit)", we seem to have suddenly moved into the area of experimental-industrial. Some complex sounds and feels too much like a trip into another world I really don't want to make.

Nexus VI from Russia follow with a superb dark-electro track "Indicator (Remix by [Sin.thetic Squad])". Great synth sounds, nice vocals at a good level, and I am pleased to be right back on the dance-floor with this one, as it's what it's meant for. After some initial strange sounds I cannot see the point of, the Russian Systemshock continues with another great dance beat track "Shiftdelete (Error550 Mix by |De:Source|)", given by some nice trance type elements within the music. I also like the vocals which I find clear and far from the norm adding to my enthusiasm.

We now go back to the USA with the solo musician Joshua Hart and "Forever (Remix by Ginger Snap5)". The dance beat continues with this remix by the very impressive Ginger Snap5, which adds to Joshua's work without hiding anything of the original track.

We then return to a more melodic sound of A.S.A.P by the Russian "Hired.Life", this is a beautiful composition but the vocal levels could I feel be improved in places. A lovely rhythmic Electro/EBM sound with synthpop elements. The album is completed by Na-Hag from the Ukraine and their track "Khepri", tribal-industrial sounds prevail from the start, another track which I feel doesn't belong here. However, it is very atmospheric and one of the most well produced on the album.

Conclusion:
The compilation is available both as a free download (low quality) and a paid download (high quality) and we should take this into consideration. It's a little rough around the edges in places maybe, but hats off to Synthematik for bringing all this talent to us once again. Several of the tracks are good when they could be great. A great mix of sounds including a lot of Futurepop, it has been around for a while now but is far from dead or even dying with this kind of talent around. In general If you like dance orientated music you will love this compilation, and based on all these points I thoroughly recommend it. May 04 2012
Diskonnekted - 'Hotel Existence'
Previous article
Olkin Donder - 'Oben Glex'
Next article