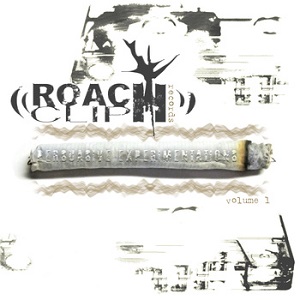 6.5
"Alright"
N/A
Electroracle
Released 2013 by Roach Clip Records
Experimental, Industrial
Previously heading Dungeon Recordings, owner of the label Kevin J. Cazier decided to once and for all shut the doors for the label to begin anew. The reason being was that he wanted to go in a very much more experimental approach to his label; his background consisted of metal, punk, industrial, and hip-hop, and he wanted artists that were completely open minded, as those without judgment can create more in a vast sea of differing noises and sounds.

And thus, Roach Clip Records was born in early 2013. And, with that said, Persuasive Experimentations Vol. 1 is the label's second compilation album to be born under its wing. Featuring twenty one different artists with twenty one different songs covering a length of one hour and fifty eight minutes, you're in for a doozy.

To start off, we have nojoined's Blinking Lights. Minimal and ambient spell out the song's game, focusing on a light electronic tune that follows through the entirety of the song surrounded by little dinks here and there along with a drone like undertone. Not the best way to start off the compilation, as I thought it was too long to basically stay on one note (in other words, it got boring), but I was onto the next track in no time.

Little Sap Dungeon brought along a mix of their song A Dinner Guest revamped by Mick Harris. A nice little rhythmic noise song brought forth with a lot of random noise and plenty of bass served up to me on a hot platter, there was no denying that this song was good. At nine minutes, it also changes up now and then, whether it takes a break to focus on electronics, breakcore, or even drum and bass, this song was well done.

Ari Porki came in with the third track Collapse, and went along with an extremely well done dark ambient vibe. The wind chimes went well. Though, I felt for as mystifying as the song was, the background synth work was a bit fast paced and sort of through off the template brought out. The faded choral effects also left a good scar on my brain.

Between Worlds, Beyond Shadows was a versus effort between Twilight Transmissions and Void of Realm. Though I was able to dig the song very much with its creepy effects and all, it was hard to be drawn into it the entire time as the same bassline and drum work was presented underneath all the other effects.

It's a bit hard to classify Durandal's Mothers Nightmare into any one category, but I'd have to set them alongside those who practice within the witch house genre. The slow pace with dragging bass drops and a little bit of drums here and there worked well enough. I wouldn't put it at the top of my list, as, once more, I found the repetition to soil the song.

Veil of Alchemy brought along another dark ambient/drone song to the mix with Communion of Cybernetic Souls. A pretty simple but deep line flows beneath all sorts of sounds. At around the six minute mark, a slight rhythm approaches, sounding like metallic drums, but helped pick up the pace. It is hard to make a drone song catchy, and while this one didn't necessarily persuade me to fall deeper into the category, it sure helped me enjoy at least another song within the genre.

Perhaps one of the most uplifting songs on the album, Igloo by Row Boat was absolutely fascinating. Positively uplifting, extremely drone, with choral effects to get it right on through, it was like being sent to the Heavens and brought back down. Each shift in tone had an impact on me, and while I thought sometimes the pitch went on for a bit too long, once it changed, I found myself reveling in the sound once more. Great song.

Perception Cleanse Perception's Tunnel (While Intoxicated mix) was an interesting mix of guitar work and a not so glum beat that rose above. The bass was well served in the song, however, I think it may have been a bit too much in comparison to the relative low sounds of the other instrumentation pulsing within the song.

I didn't much enjoy the sounds of Uzbazur345's Consumerism. Though it did shift much, the overall length of each organ sounding note was too much and bored after a while. However, I did find it amusing how, at around the five minute twenty second mark, real life sounds were used to emphasize the title of the song. Very well done.

At about half way through the album, Cousin Silas came out with Dark Tide, a dark ambient track that has some higher pitched notes mixing within lower ones. The atmosphere of the song was great, but all the notes jammed together didn't make for such a great sound at points.

Christopher Alvarado teamed up with Mystified to bring forth Axis to Asylum. First, beginning off as another dark ambient track, it slowly works its way into becoming a tribal track with a steady drum beat and other instruments standard to the genre. I really enjoyed the parts in the song when the drums took over surrounded by more ambience. And, this is another song that was very well made.

Alatisa put out their song The First Betrayal with some nice bass following the main line. Following later on with sounds that definitely put the song as something that a snake would dance to, this Middle Eastern inspired track could make you think of Aladdin with ease.

uropatwin's Proton has a sort of sci-fi jab to it with the little electronic effects and laser sounds that perforate through the main line. Drum and bass also help fill in all the cracks and crevices. It wasn't my favorite song, but there wasn't much wrong with it either, so it was done well.

Playman54's sphere1 could be described as partly minimal and partly ambient. Few effects pervade the overall style of the song. High pitched chimes and slight drum effects really take the show. It was an interesting way to go about making a song. And one that I don't think I've heard at all as of yet.

And, if you've been looking for piano work, then we're finally hitting you with some. T.A. Weeks produced Vast Void which begins off with piano work that's slowly accompanied by drums and a few electronic tinges. The drums really help serve it out with the powerful slams they deliver on. However, the song really doesn't change up after that, leaving a bit to be wanted. But, still, this song was pretty good.

Cerci's Ripple and Tarnish brought out an eighties mindset in a sense, with some music that was really inspired from the sounds of video games. Or at least was put out that way. Overall, the song was good, and it went ahead and varied itself for a lot of the different parts brought upon. It was tasty.

Scattered Order decided to input a remix of their song Happy Sampling by Browning Mummery. Gritty and muddy, and, as expected from the song's title, samples were placed all over, this song was alright. I couldn't get too heavy into it through all the noise as it just did not go all too well with the drums and guitar work that lingered beneath.

And, well, shit, Dogfight Sox brought out The Intergalactic Chimpanzee Frenzee from . This song basically surrounds two monkeys fighting over controls of their spaceship as they try to get through a meteor field...And they also fight over cigarettes. The hip hop influences combine raunchy lyrics with some wonderful guitars. This song is a fun blast to get through, as stupid as it may be.

Insufferable Noise Machine decide to show off some punk influences with Mr. C4. Not a terrible song by far, and the muddiness of it almost reminds me of a garage band. It worked well. And the shouting just made the song all the more angrier.

Max Mars slowed down the pace once more with Taming the Mynotaur. A slow beat with ambient influences, wind effects, and some higher pitched whistles made for a nice song. Though, I think the high pitched sounds were a bit too much on the ear; they needed to be either quieted or just take a pitch difference.

The ever lovely titled Fucking the Bishop's Daughter by M.O.B. (Men On Beer) certainly showed off a classy song all about how someone got laid in fifteen different positions by the bishop's daughter. A low fi song that's quite delicious and surely to be accepted at any religious ceremony, this is a hit that will be well reckoned in history.

But, that would be the end of the compilation. Through the various complaints and criticisms I've had getting through this album, I still say that I had an enjoying time. At times I was uplifted through beautiful harmonies rendered by ambient wonders, and, at others, I was laughing my ass off as two monkeys fought over cigarettes. This was a fairly bi polar ride, but it has persuaded me to check out Roach Clip Records more thoroughly. Go check it out for yourself; you may find something you like.
# dungeon-recordings
# roach-clip-records
# persuasive-experimentations-vol-1
# dark-ambient
# ambient
# punk
# witch-house
Jun 09 2014
Shatoo - 'Floodlights'
Previous article
Surgyn - 'Envy'
Next article

BandCamp
Various Artists - Body To Body is available at POPONAUT from 22,95€