Various Artists - How to Influence and Destroy 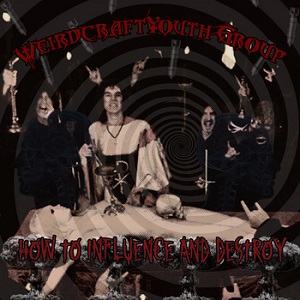 6.5
"Alright"
N/A
Electroracle
Released 2014 by Weirdcraft Youth Group
Experimental, Electronics
The hooligans over at Weirdcraft Youth Group are at it again with another compilation under their belt filled to the brim with random artists with odd names and even odder song titles. Coming in with twenty different songs with twenty different artists each honing their skills, it was worth a shot to take a look at.

But, since I have a lot to say, let me not dick around and just get straight into the gist of things; Scrotal Tear begins off the album with Bonum Commune Communitatis. Pretty dark ambient in nature, with very few sounds plaguing the body save for some chanting that just is not walking in the light. However, it does make me feel as if Satan's about to crash through my floor boards for a nice little tea session.

Up next on the release was Hersenerosie with Menstrualdripping Rimjob. As much as I appreciated the mere image of a blood soaked journey as someone's tongue delicately swiped at another's anus, I could have done without it. Save the title, though, and the music was half decent. Drums will be coming for you in the main section of this song, a sort of punk vibe coming off, but it also had works of funky sounds in the mix.

Following up on the previous and beautifully titled song came Daed's Antihymn. Fast paced, and using a lot of everything, from electronics, to drum and bass, and even violin, it came to be a fairly odd but good song. I also enjoyed the almost subliminal message that had a squeaky voice read out, "Satan." Oh, I am going to have to sleep by my bible tonight after I get through the rest of this.

Along came The Downgrade Complex with Qixoni to bring forth Disassocative Breakcorist Syndrome which really served up an earfuck. Which, in other words, means there was a lot of noise present. I didn't get much into this one, but I did appreciate around the two and a half minute mark when a synth line presented itself with the noise. The glitch like effects also helped move the song forward.

Warp Maiden's Battle March slammed out next and while I was expecting something that, well, sounded like a tune that could be played in the midst of war, I was given more of an electronic glitch track with all sorts of little effects scattered about. The bell within it made a nice little mark, but did its job well.

Slagseed presented a noise/glitch song as well, in the form of Idontcare. Though the song title may make me feel as if my emotions are not being looked at, fear now, Slagseed. I care about this song even though the title doesn't. It was odd to listen to, and presented more noise than anything. But, still, I managed to get through it without complete distaste.

Then came along Remy Brecht, the man who introduced me to this album, with Lucifer, Promethean Bringer of Light. The intro is pretty creepy to say the least, with someone learning that who they are talking to is none other than Satan himself. Drums come along along with some light noise over it. The vocals in the song have an echo effect on them, and the muddy sound kind of compliments the whole feel of the album and the song itself. Well done.

Midifister's Sadistic Flesh Eater uses samples from documentaries, I think, talking of a man who had sex with dead bodies and ate them, as well. It makes for another track that wants me to purify my soul. But, I feel as if the amount of samples used in this song distracted too much from the music, mainly because I had to strain my ear to listen to whatever was being said over the music.

Catdog, whose name reminds me of a cartoon show that I watched when I was younger, came along with Fan of Man. Drum work and light synth work are the name of the game with more talk of God from the movie, The Devil's Advocate. I do feel as if there was yet another case of overuse of samples. But, the music was decent.

Blarney Mumble comes along with Appeal that sounds as if it belongs in a cheesy horror film from the 70s as the stalker comes for his prey. It was alright, kinda looping the same sound over and over. Even for a two minute song, it was boring.

Next up is KURSSE who brings forth Crystalline, which is a bit refreshing. Elements of synthpop are found in here, though eighties sounding they are, with sounds of static belting over it to have its own identity. Not only that, but there are samples from Breaking Bad involved which is relatively nice.

As the twelfth track on this big release was Morlox with Safeword. Elements of dark ambient combine with aspects of noise. There is always a background noise with creepy sounds breaking through. Around the half way mark, there's a sound of a grinding saw which serves as a transition to some crazy tape work and an all around compilation of random noises that really just can't be translated into what most consider a song. Good thing we aren't normal people, though.

Bit Mummy brings out something different from the rest with Media K Ultra. Sloppy industrial metal is the name of the game, sounding as if it was recorded on a tape and meant to remain as an underground movement, it had an interesting sound. It was fun to listen to, and refreshing for the album.

Perhaps the oddest named artist on this album would be 666gangstaz, which sounds like Satan's personal crew from the hood. They come along with a song titled ( = p$ycH3del!K pu$$y assA$!n) - reborn which is honestly a really dumb title, but, if the music talks nicely, then that's all that matters. With the sample in the beginning serving a pretty awesome intro, the song actually goes into some IDM areas. However, as the length of the song is long, it switched in pace several times. Even, at one point, sort of delving into rhythmic noise areas, with tribal influences. Now, though I personally find extreme distaste in both the name of the artist and their song, these guys make some good music.

Slagseed then came along and delivered a cover of Skinny Puppy's Social Deception. If you've listened to the original, then you can expect the sound to be a lot more quiet, the vocals not too audible and processed pretty hard, with the main sounds coming from the bass. In other words, you might want to stick with the original.

Crazy Gnome has the longest song title on the compilation, and that is Let Me Just Push My Problems Onto You For A Month Or Two So You Can Have A Reason To Ignore Me (Bringing Things Upon Yourself pt. 1). And, as I've said with previous songs, I most likely would have enjoyed this song even more if it weren't for the amount of samples used on it.

Ohmegasir's Syngaterb hits off with a fair rhythmic noise beat. And I dug this immediately. The additional sounds later help it remain fresh, and though the main line is always there, it changes ever slightly throughout just enough so the song doesn't dull. You can say I found my favorite song on the album with this one.

Baconhanger's Retribution gives a very nice fast pace electronic beat, but it still reeks of something evil just through the intro samples and piano work. The darker synth work that always remains in the background also attributes to that feel, but is still awesome.

Black Medic delivers a drone song in Phonophobia. I didn't dig into it so much in the beginning, as there isn't much that can be done with drone music. There's the single line, with some sounds that went off like a monster in the underground as well as flies buzzing about. From about the five minute mark to the seven minute mark, there's a really ear shattering sound that pushes through. The song then ends with more drone effects. Though I didn't have a real problem with the song, I also didn't have much to appreciate out of it.

And the last song I really just could not stand by far. Adon Arteaga's The only regret I have is fucking you. And the song within this one is of Miley Cyrus' FU featuring French Montana. The only thing that's different would be the fact that it sounds like, if this were a CD in a CD player, the CD would be skipping fucking terribly. I just wanted to skip over this extremely fast, and winced while I was forced to go through this. My only question is, "Why would someone do this?"

Now, I'm done and over with that last song, I can reflect on my good experiences while getting through this compilation. I liked it, far and through, I did. There were some really cool songs to be found though they may have made me feel as if a devil were lurking over my shoulder as I went through them. Though some songs were difficult to get through, I think anyone who went through this would be able to find at least one track that they'd want to go back through at least once in their life.
# scrotal-tear
# weirdcraft-youth-group
# hersenerosie
# daed
# the-downgrade-complex-with-qixoni
# warp-maiden
# slagseed
# remy-brecht
# midifister
# catdog
# blarney-mumble
# kursse
# morlox
# bit-mummy
# 666gangstaz
# crazy-gnome
# ohmegasir
# baconhanger
# black-medic
# adon-arteaga
Jun 06 2014
XP8 to drop three EPs in the Alchemy Series
Previous article
XP8 - 'One Of Three: Nigredo'
Next article

Various Artists - 'Fall Is A House Of Gold And Rain'