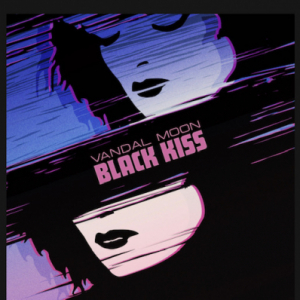 9.0
"Amazing"
Released 2020 by Starfield Music
Post Punk, Darkwave
When Vandal Moon released Teenage Daydream Conspiracy back in 2016, the word was out that this outfit had a lot of potential. Every track had a tinge of darkness and a sense of wonder that led us down pathways and crossroads into the world of Blake Voss and his sonic canvas. A few years later Voss teamed up with Jeremy Einsiedler and became a duo and released their highly praised Wild Insane on Starfield Music.

Vandal Moon signed to a label run by FM Attack synth-wizard Shawn Ward. This opened up several collaborations with FM Attack as well as one with Betamaxx. These collaborations helped propel Vandal Moon to a wider audience endearing themselves to goth and darkwave fans and even forged a nice crossover to the synthwave enthusiasts . All of this leads us to the new album Black Kiss.


The first Singles "Hurt" and "Dead" off Black Kiss were released last month. Those already familiar with Vandal Moon, know how the band likes to meticulously cultivate their sound through exploration and collaboration which is quite evident in the last three releases. Each album shows a willingness to dwell in but not be held prisoner to any genre expectations. Teenage Daydream Conspiracy  found a way to channel some of the best goth/post punk/synthpop influences from the 80's such as The Cure, The Mission and Depeche Mode to name a few. The album was very impressive, but it still didn't quite have that one thing that would be the onset of separation from many other artists inhabiting this musical neighborhood. When Wild Insane came out two years later with Jeremy Einsiedler added to the project along with the programming, mixing and production skills of label owner Shawn ward, the duo found that "thing" that elevated the band to a sound that harnessed the darker waves Vandal Moon made earlier in the band's existence to a level that incorporated new sounds to raise the bar in all aspects of creation and execution. In addition, Ward added to some of the writing as well. The same holds true for new album Black Kiss. Black Kiss shows the band's willingness dig deep into the creative landscape and take all their experiences from the previous albums and punch the world in the face with a ten song statement of pure dark and wonderful synth bliss.


With the album's dystopian themes about robot enslavement and the willingness to do anything to escape plays right into the current state of our world. We are enslaved to our homes and our computer screens trying to find ways to survive a deadly plague based in reality backed by the spin generating talking heads that leave us confused and angry. As we sit back and watch the world burn we can turn on the next soundtrack of dystopian doom hosted by Vandal Moon. As the days pass, music becomes a coping mechanism to escape the uncertainty of the times. We are looking for our Byzantiums, Innisfrees and special places that temporarily shelter us from the outside realities. "Hurt" is the first single and opening track to Black Kiss. Immediately the throbbing baselines wraps tightly around your throat pulling you into the complex web of sound design. "Hurt" showcases tempo changes and breaks that keep the listener's attention locked in. Voss' voice has that perfect variation of pitch and inflection. Musically, Vandal Moon mainlines a healthy dose of synthpop to infect the pop foundations of their songs. This foundation ultimately capitulates to the darker side of the synthpop realm which ultimately is where the band wants to go and expand from. "Dead" is the second single and it's easily another top track along with "Hurt". The tempo slows enough to instill some relaxing gentle synths to air out a peaceful feeling to surrender to. Unfortunately it's only three minutes long. "Dead" takes you away but returns all too quickly. Can we get an extended remix?

It's hard to separate the music and vocals and speak to them as if they were isolated. The music and the vocals work so well on each and every track, feeding off each other to engulf the listener in a place they may not be so ready to leave when the song ends. "We Live Forever" features the talents Leanne Kelly of San Francisco's New Spell. The exchange of Voss' and Kelly 's vocals add to the dynamics of the song. In addition to Leanne Kelly's vocal contribution, she also offers her skills on the synthesizer. "We Live Forever" comes across somewhat anthemic with its delivery. "We Live Forever" perhaps expands off the dystopian concept of the robotic enslavement; living forever free of slavery versus enslaved. The vibe opens up thoughts on which way this could go. "We Are Electric" may suggest the robot enslavement is at the hands of humans and the robot knows it could never trust a human. These concepts seem to have origins in a Phillip K. Dick novel perhaps? This same concept was also evident on Wild Insane as well. "We Are Electric" along with "Pretend To Die" feature synthesizers from label owner and FM Attack mastermind Shawn Ward. For those familiar with his work, it is double pleasure to get Vandal Moon and FM Attack in the same song. Vandal Moon also contributed to three of the ten tracks on FM Attack's New World LP from 2019.

There's just something about what inspires Blake Voss and his lyrical concepts. We explored it about four years ago when BR interviewed him. From angst to loss to revolution and robots we get a chance to make the songs ours in a way that is meaningful to the listener. It may remind us of a good experience or perhaps the feeling of loss or even a melancholy feeling. I think the not so straightforward meaning of many of the song themes allows Vandal Moon to share their story  without giving it away completely and it allows us to make it our own and attach it to our own experiences. There are ten songs included on this album. There is nothing filler related here. Any one of these ten tracks could be the lead or second single; it flat out does not fucking matter. Listening over and over, I am in love with the epic "Suicidal City Girl" and the powerful ray of hope in "No Future". The choruses are well executed and catchy , not only for these tracks, but for all. "Robot Lover" seems to define the concept mentioned earlier in this review about robot enslavement. Maybe it's about falling for an actual synthetic human like in HBO's adaptation of West World?

"Wicked World" unveils an electro feel from the 90's industrial breeding grounds while still cloaked in a goth chassis. It's no secret that Vandal moon appreciates and respects the past. You can hear it in their music. This is not a tribute to the past, but rather a testament to the growth of the band and their willingness push the limits of creativity to new levels. "Black Kiss" harvests a lot of the sound and culture around what made the 80's so influential and legendary, and bridges those influences into ten modern reasons to buy this album without question!

Black Kiss was produced and recorded by Blake Voss and mixed by Maurizio Baggio (Soft Moon, Boy Harsher, Holygram) and features contributions from Shawn Ward of FM Attack and the electropop duo New Spell. The  amazing eye-catching artwork was done by Neil Scrivin. If you haven't preordered the cassette on Starfield Music or the Vinyl on Graveface, get off your ass and do it! These will not last too long, as both physical formats are limited. Bravo Vandal Moon! Well done.

Bandcamp
Bandcamp (Graveface)
Die Krupps - I is available at POPONAUT from 29,95€

Doors In The Labyrinth - 'In The Shadow Of The Monolith'

The Flood - 'In Love or Despair'