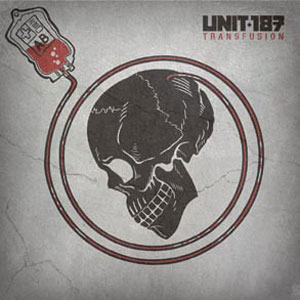 7.0
"Good"
Released 2012 by Vendetta Music
Electro, Industrial
'Transfusion' is the remix album follow up to 2010's 'Out For Blood' by Canadian industrial metal/electro-industrial act Unit:187 and features Chris Peterson of Front Line Assembly fame who collaborated on the album 'Out For Blood' and also produced the said album.

Rolling Vengeance (Remixed By HiWatt Marshall & Cevin Key From Skinny Puppy)
The opening remix by Hiwatt Marshall and none other than Cevin Key of Skinny Puppy gives the album a real strong impression. Having openers like that really don't having often with it's hip hop like electronic drums at the start and glitchy synth parts that Skinny Puppy are known for. All present before following on to the metal elements of Unit:187 appear spaced in the songs form before going back to the more glitchy elements, really help keep an even balance throughout the song without overpowering any of the other elements.

Threatened (Rom DiPrisco Remix)
Rom Diprisco's remix of "Threatened" takes a more electro house approach to the song with its strong four on the floor beat and it's back and forth between notes bass line. All while the vocals drive alongside the bass line, turns the song into a track totally aimed at the dance floor.

Sick Obsession (Stiff Valentine Remix)
Up next is Stiff Valentine's take on "Sick Obsession". From the start of this track you know it's going to be a heavy affair with punchy kick drums and heavy tom patterns and chugging guitar riffs taking the for front, but keeps the dynamics within the song with well placed gaps in the mix, giving breathing space. However the remix seems too similar to the original on 'Out For Blood'.

Blood for Blood
Something welcomed a lot on albums like this is new original material and "Blood for Blood" settles that. Opening with string arrangements and programmed drums, before coming in with quietly whispered vocal parts this song shows the more electro-industrial side of Unit: 187, which was mainly replaced by the metal side on 'Out for Blood'. A nice change and helps split up the remixes well.

Threatened (Knifed Remix By Jared Slingerland And Craig Johnsen)
It was only a matter of time before a fellow member of FLA appeared and appears in the form of FLA guitarist Jared Slingerland and with the help of Craig Johnsen they have there take on threatened giving the song a total overhaul and giving a drumstep/dubstep approach to the song with it?s half tempo beat and heavy basslines making the song a totally new song on it?s own but keeps a sense of being a remix with the vocal track being a kept and is probably a favourite of the remixes so far.

Living To Die (Necrotek Remix)
Dark electro act Necrotek have there turn now with their take on "Living to Die". Beginning with a steady bassline and spaced with drum hits throughout the track, giving the track an almost downtempo like vibe before parts of guitar come into the track as well as a strong punchy kick drum keeping the pulse of the song and building to choirs. However throughout its 5 minutes plus length, apart from bringing in new parts to the remix, very little changes which can make the song feel a little tedious at times.

DDD (Ivardensphere Remix)
World music IDM group iVardensphere remixes the track "DDD". Starting with eery like synths and spaced hard hitting percussion, the group is known for before adding more percussive layers treating the song to a almost middle eastern sounding track before pick up the pace with the percussion. Further on the tracks electronic side comes out with a steady beat and a bass line take over and the vocals come in, also bringing the guitars to the mix too before going back to its tribal approach once again. Throughout the remix it switches between these parts but in its 6 minutes entirety, very little changes and in parts later on totally takes out the world music elements too much. I feel for iVardensphere, this to be a rather weak remix compared to the often fantastic job they usually do.

Rolling Vengeance (C((O))de Blue Remix)
(C((O))de Blues Remix of "Rolling Vengeance" begins with stuttered like vocals before coming in the strong beat. After that adding the odd snare drum hit, before breaking into silence again then going into the main part of the remix which is coming in with a strong backbeat and heavy basslines with its half tempo. The way basslines play out gives the track a vibe similar to the Jared Slingerland and Craig Johnsen remix with its use of elements of drumstep.

Kurva (16Volt Remix)
Industrial metal/coldwave act 16 Volt have there turn at remixing the song "Kurva" next, giving there take on it with a repeating distorted synth line and off beat drums, before adding there own guitar riffs to the song while the vocals coming in. The work on this remix is very similar to the sound of their work on there latest album 'Beating Dead Horses'. I found this remix to be very redeeming after the last couple of remixes and 16 Volt have done a great job, really working there own sound and style into the remix.

Rolling Vengeance (Deathproof Remix)
Deathproof start there remix off with radio like static before adding breakbeat like drums and guitars showing off a more industrial metal approach to the remix. Something I found interesting to this remix was the use of hip hop elements, as stated before breakbeats, but also the use of turntable scratching sounds which really did freshen this remix compared to the others and helped give the remix a sense of identity.

DDD (Witchmaker Remix)
Kicking off straight away with the line "for the people", before having the bass guitar line repeating alongside the drums giving a strong rhythm section before heading into the verse and chorus section, still keeping the metal elements prominent throughout this remix. There is a heavy use of pad synths that really do balance out the melodic side throughout the remix.

Threatened (End Threat) [Glitch Mode Mix Cyanotic]
Cyanotic's approach to "Threatened" really does state it in the mix title, adding glitch elements and also the heavy use of drum and bass which they are known for into the song. Also having a subtle, yet strong, bass line to keep the song driving. The remix itself focuses more on percussion and drum elements more than anything, but with it's stops, starts and drops help keep a strong sense of dynamics throughout and helping to keep the song interesting.

Rolling Vengeance (Mindless Faith Remix)
Mindless Faith's remix starts off straight away, no questions asked. Drums instantly and synth bass accompanying with vocals, then coming in and cutting the vocals in a way that gives a call and response approach. Something none of the other remixes used. While the guitars remain being alongside the drums as the main drive, before adding more synth parts to the mix before all coming to a close.

Threatened (Mono-Amine's Poppy Remix)
The final mix on "Transfusion" is done by Mono-Amine who decide to open the mix with snare drum rolls and flange affected vocals. Coming into the main part of the mix with guitar parts and adding extra synth lines with parts of the bass synth line being glitched at parts and processed samples are inter spaced throughout the break, all before adding another layer of glitched synth to the bass line. The use of glitch effects throughout this mix work really well and don't overpower or take away from parts such as the vocals or guitars, but a strong and different closer for sure.

The verdict? 'Transfusion' is a good remix album that really does play to the strengths of not just the band's music, but the remixers themselves. Unfortunately it brings out on some remixes the weaknesses too, but no matter how many remixes on here are considered weak, there are always strong remixes balancing it. I'm going to give transfusion a 7 out of 10 for the points of the better remixes really do help keep the album up and do give it a redeeming factor and also how the remixers have really made the remixes there own for better or worse. Also using the idea of breaking up the start of the remixes with new original material help keeping fans of the band happy.
# electro-industrial
# industrial-metal
# dubstep
Jul 23 2012
Bands needed for 'In Praise Of The Fallen' Charity Album
Previous article
S.E.T.I. - 'Baikal'
Next article

Vendetta Music Store
Daf - Reworx is available at POPONAUT from 16,95€

Let There Be Darkness