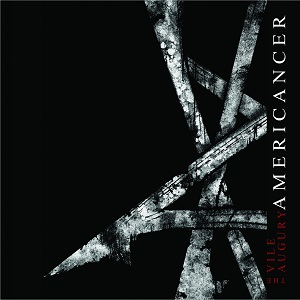 7.0
"Good"
N/A
Electroracle
Released off label 2014
Electro-Industrial, EBM
If ever there was an ill omen to plague the Earth and tell us what were to come, The Vile Augury would be the ones to tell us of it. I mean, their description of themselves just paints a lovely picture. "We are the filth, corruption, disease/ lies, greed, lust, anger, and hatred of this world/ We are scum../ We are small, weak, cowardly, murderous, disgusting whores./ The Vile Augury comes...". While not sounding too far off from the stereotypical scene at a frat-house party, I can assure you that there are dark and sinister motives behind this trio's efforts. And that can well be seen with their debut release Americancer.

Already combing two great sentiments into one word, Americancer shows off the talent of this promising act. While first making an appearance on Psyclon Nine remix album of their latest release, The Vile Augury has a small following steaming forth already due to their affiliation with higher named acts such as the mentioned, now defunct group, Velvet Acid Christ, and Everything Goes Cold.

Leading frontman Michael Vile Augury provides all the vocals and programming efforts to good measure, while his live crew (consisting of Leslie Saint on bass and keys, and Kay Dolores on guitar), the trio is known for dishing out ecstatic performances in the San Francisco Bay Area. Perhaps soon they shall be breaking out into a world wide audience. Although that sounds unlikely, one can never know.

Big dreams pushed aside, Americancer brings forth a plethora of songs to show off all the talent built inside the body of Mr. Augury. To show off the hardcore antics of the band, we're started off with the song titled Concrete Lollipop. While the title is both sweet and sour, the song is anything but. We're delivered the angry, somewhat toyed with vocals of a pissed off man along with an compilation of electronic sounds, some even coming off a bit noisy to start us off with. While it was good, and I listened to it a few times, it was nothing too get too wet over as of yet.

The title song makes a swift turn around as the second track on the album, and kind of just continues on with what the first track ended with. Leeches provides us with some of that EBM attitude that they use as a genre tag, along with some more electronic, robotic like vocals.

The Ritual continued on with the brutal assault, but didn't really do much to my liking. It sounded like a repetitive effort from the first two songs. However, Satisfaction did leave me satisfied. A slower pace, a better synth line, and some creepy vocals made way for a good time.

Spread gave me even more joy in listening through this album; I felt that at times the vocals were a bit too fucked with, but when a more clean voice came through, I was enjoyed it all the more.

Plague was sort of like an intermission from all the rage. If ever the vocals don't pull through to pure amazement, this project can rest easy knowing that they can make a kick ass instrumental track. The drums that ushered in and out were quite amusing, while the piano work against the backdrop electronics worked wonders. I'd like to hear more of this type of stuff that has me thinking that these guys are anything but vile.

In what seems to be the roughest song to date, we are given the treat of listening to the excellent music in Excuses. And, the song is awesome. If only it weren't for the vocals at times being barely audible over the tremendous beats, I think this song would have been a lot more accomplished.

And, going from that track to the self titled Vile Augury was kind of disappointing; the sound in Excuses was loud and amazing. And then this track, while sounding good, just seemed like it dropped in quality. The synth work was good, however, and turned out to be one of my favorite lines on the album.

Fear not, for the album comes back quickly with Death Lessons in full force, treating the sound and voice with equal importance. The balance still seemed a bit off, but it was forgivable within this song.

And, as the final track on the album, it also turned into one my favorites, for Into the Dark was another instrumental that was very well made. It has the potential to make a crowd in club get their boots stomping.

But wait, there's more; thanks to the successful Kickstarter campaign that the band launched a while back, I was able to get my hands on three bonus tracks that were not included in the original album. And I am so grateful that I got them, because all three tracks are instrumentals. Breathless wasn't astounding enough to take my breath away, but it sure had me loving every minute of it.

Truth created a pretty simplistic beat with techno tendencies, but still managed to create a really good feel. It was certainly different from most of the other songs on the album thus far. And, Heartless was the true final contender of the whole Americancer play; I adored the synth work once more on this song a lot. And it was a great way to leave off this album.

Now, there is a lot of potential within this band. More than that, perhaps. The sound is awesome; it's proven well within each instrumental track that was thrown at me. Hell, I might just even create a playlist with all five of the instrumental present on the album just so I can jam out to them.

I think my main problem with the album never comes to the beat, music, noise, or sound that they put out, but more or less comes from the vocals. They just aren't the greatest. Sure, they belong to this category of music, but either they're too low to hear, or the music is just outshining them at every turn. Give a little more balance between the music, maybe a little less distortion and effects on the vocals, and I'm sure that these guys will come out with a stellar album.

Nonetheless, they have created a wicked sounding album that will surely gain the attention of more than myself. However, for now, I can surely give this project the Steve seal of approval...If that even means anything. Apr 16 2014
∆aimon - '∆AIMON'
Previous article
Cease2Xist - 'WIYGN? EP'
Next article

BandCamp
Waiting For Words - Egocracy is available at POPONAUT from 19,95€