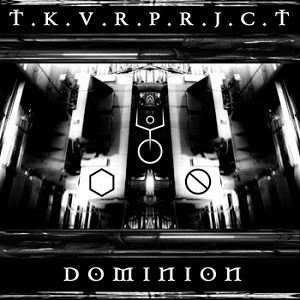 8.0
"Great"
N/A
Electroracle
Released off label 2014
Powernoise, Dark Ambient
I suppose I've been on a bit of a recent powernoise listening spree as of late; with just recently reviewing both 's latest albums, I now find myself listening to The Takeover Project's Dominion. But, before I get into any music talk, let me give a bit of an introduction to the man behind the music.

Pennsylvania born Matthew Adams (who now resides in Ohio), has been a music producer since his early teen years. He takes aim to create a mix between dark ambient and powernoise, hoping to master from creeping, slow dragging songs to vicious and crushing beats. Already playing in the Summer Masquerade Ball 17 in 2013, he now aims to crash down a full sonic assault on other areas.

However, those are all just words. What really counts is whether or not the music can echo the powerful words used to describe his project's creations. And, well, Dominion was released just this month, so it's time I took a crack at it.

And, there is not a better way to start an album than to begin it off with the title track. Before getting into any music, we're fed a line that goes, You are the children of fear / This is my dominion. A nice, catchy little phrase to use right before being banged in the face with some awesome drops. The vocals are interesting, in a sense. Rather than being distorted beyond fuck like in so many other songs within the genre, it's spoken out with a bit of an echo effect. Not only that, but at about the two and a half minute mark, we're delivered this fucking amazing speech following up on the beginning mark with an underlying synth line. I was really given goosebumps while listening to it. And, the final minutes of the song really just got to me as the synths continued well along with the powernoise that drove the song originally.

Now, if that's not a mouthful to talk about, let's get into iReject. We're delivered more vocals, this time with more of a growl than anything, but still not digitally fucked with to the point of no return; the lyrics are audible, which is pleasant for once, although I felt the constant repetition of the song's title was redundant and took away from the music. There was also a sound that reminded me of a truck backing up in the song, and it was able to come out more than the other sounds present, which kinda threw me off and annoyed my ears.

Skipping over the remix (and saving it for later discussion), I came to rise. More slamming beats pilfered my ears, and I did miss the lyrical content that the first two songs presented. Personally, after just listening to those two songs, I really just am a fan of this man's vocals. However, the song did manage to entertain me well enough, although, once more, the repetition of hearing the song's title over and over again within the song was a bit annoying.

Nullify features another artist by the name of Devonnia. It seemed a bit weird to find her on this album, as she does come off as a rather nice sounding artist without any hints to a harsh musical project just based on her SoundCloud profile (check it out here: https://soundcloud.com/lookingupwardnonward). However, this woman manages to import some creepy vocals to an already horror-esque song. It's robotic, in a sense, and fits perfectly.

The Dirge of Broken Steel shows off the man's ability to let a song crawl up on you in a slow fashion. And, it's easy to here some dark ambient influences here and there in between the bass drops; listen carefully, and you'll hear a synth line in the background beyond all the noise that helps out the overall feel of the song. But, by far, this turned out to be a favorite of mine on the album.

I was then thrust into a dreamy Nightmare as track eight rolled upon me. And, well, with the pace of the last song being pretty slow, this one decided to go pretty fast to fuck up your mind. The vocals, however, this time, were off. They surprised me with a scream here and there in the beginning, but when he tried to cohesively put them together, it came out like a garbled mess. That's not to really strike down the beauty in the chaos that followed through with the music of the song, for it went well.

I think what made Weary so special, in a sense, was not only that the noise screaming at me was good, but it was also for the fact that the background noise spoke of an old insane asylum filled with whispering voices of the dead. At least that's how I can best describe it. Thankfully, the vocals, though few lyrics there were, maintain a fairly deep tone, but are once again audible. Hoorah.

One Way or Another [Confession] is pretty much the bastard child of the album; it sorta hits out of nowhere with a really melancholy strut. There's no powernoise influence here, just a soothing, sad sounding song that you'd listen to as you stared off into the distance after a tragic event. Odd as it was, it was delicious.

And, the last final song on the album before getting to the remixes was To Prey Upon Destiny. Polar opposite with the previous song, I was fed some pretty screeching vocals that really worked well. A bit repetitious once more, but the music was rather splendid. Focusing on a more simple beat this time around without so much background noise as previous, it was easy to focus on what was delivered.

Now we get into the two mixes on the album. The one is a song originally by Lights Out, God Help Me remixed by The Takeover Project. However, this song was also featured on Dust, so, go check out that review for a breakdown of that song. The other mix was of Men Apart which was featured on his 2013 album, PROJECT: Hexagon. The original didn't have me jumping with joy all too much, but the mix slightly enhanced it by making the ambient sound within it more prevalent and less distressing on the ears.

And, alas, the album comes to a conclusion and so does this review. Now, my biggest complaint about this album comes in the form of the repeating lyrics that swarm the songs. I bitched about that a few times up above, and still will. However, the lyrical content, when not speaking out the song's title, do really hit hard and well. Aside from that, this album is really decent. It'll stay in my head for quite a while, and, well, that's that. Check it out and buy the music if you can afford it.
# lights-out-god-help-me
# the-takeover-project
# dominion
# powernoise
# dark-ambient
# devonnia
May 13 2014
Various Artists - 'Distant Skies'
Previous article
Blast Radius vs. Paul Venkman - 'Purity '
Next article

BandCamp
The Chemical Brothers - Surrender 20 is available at POPONAUT from 114,95€