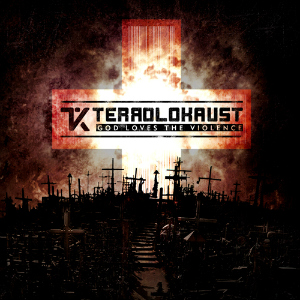 8.5
"Great"
N/A
Electroracle
Released 2011 by DWA
Dark Electro, Industrial Rock
(This album is now 18 months old, but I always felt it needed a place in this magazine - Nick)

lt seems it's time for another DWA debut review and this time round it's Spanish act Terrolokaust with their album "God Loves The Violence". Hailing From Barcelona, Terrolokaust is comprised of vocalist Javi SSagittar and keyboardist/programmer Indio. They have a unique style, which is highly melodic and has a use of almost exclusively melodic vocals.

I.N.T.R.O - The Opening track beginning with reversed sounds going through to a slow marching like kick drum before synths play accompanied by a passage of spoke word passages in different languages by a female voice going into the first song of the album.

Exposed To The Wrath - The first full track on the album "Exposed to The Wrath" explodes with an up-tempo four on the floor beat alongside side chain like bass leading into the verse with Javi's strong, harsh yet melodic singing style helping drive the song alongside the already strong beat and bass lines a strong and promising first track.

God Loves The Violence - Time for the title track "God Loves The Violence" opening with a quiet synth and a small vocal sample leading to an additional synth playing the melodic line opening the verse through to a chorus which has the perfect qualities for a real sing along chorus at a live gig and a good lyrical concept on the instincts and effects of war.

Feeding On The Lies - A more slower tempo song starting with a film sample and wastes no time in opening with a voice and heavy use of the pitch wheel on the lead lines alongside a stabbing bass riff in the chorus there is a use of multiple vocal parts creating a harmony alongside Javis powerful vocals which help reinforce the catchiness of the track and also the subtleties of metal hitting sounds on the snare and additional layers help keep the song memorable and interesting.

No Control - "No Control" brings the tempo and pace up again and mixes it up. A very bass heavy song , it uses bass sounds that have an almost old school EBM feel to them but still managing to keep melodic properties there alongside softer more quieter vocals in the verse before upping the anti in the chorus when the power of the vocals increases.

Nihilismo Moral - a slower number, "Nihilismo Moral" opens with distorted moody synth string and more voice samples before bringing in one of the heaviest kick drum sounds I've ever heard in a song. Vocally the song is entirely in Spanish which is a really nice touch to the song and the delivery goes so well with the sounds that it's almost perfection and probably one of my favourite tracks on the album.

Just One Fix - an interesting addition and treat, heres a cover of Ministry's "Just One Fix"- and an impressive one at that with the only thing retained from the original is the samples gone are the aggressive repeating guitars and jackhammering drum machines and replaced with a smooth EBM sound along with a melodic vocal take on the lyrics an interesting addition too considering the heavy reworking.

Ignoranze- Back to original material again, "Ignoranze" keeps the quick pace of the album going with it's screechy and blip like synths and percussive layers from the start setting the scene for the song and repeating one word lyrics help to make a short but catchy number that could work in any club night or set without a problem.

The Pain of Knowing - One of the slower and longer tracks on "God Loves The Violence" quietly opening with broken and arppegiated chords making for a piano like feel and smoothly sung verses making the song almost accapella then increasing the volume in the chorus adding percussion then reverting back to the quiet verses and using elements of acoustic drums in the bridge/breakdown section a very different track from previous songs and shows how Terrolokaust can adapt to different style of songs and show a good degree of versatility in songwriting and musicianship.

Your Fucking Drugs - Another solid mid tempo track "Your Fucking Drugs" is a shorter track compared to the previous and keeps a solid beat and strong keyboard synth parts not relying on any real melody or hook more on gates arps and pads from a synth sense aswell as Javis vocals throughout there is a use of female vocals in the pre choruses which is a great addition and something that caught me off guard and works so well in the lead up to the choruses.

Thirsty - A very percussive beginning to this song accompanied by film samples and a repeating synth riffs and an interesting use of almost breakbeat like drum patterns through to the verse vocals alongside extra bass synth layers giving the some very dense backing to the vocals in the verse before taking a more melodic turn during the choruses I find the use of more offbeat and breakbeat in the drums to be a fresh change and keeps the song interesting and not constantly sticking to the four on the floor beat we all know.

La Realidad - Slowing down about now with "La Realidad", which is exclusively like nihilismo moral in Spanish. Musically the track has an almost old EBM feel to it with it?s multiple metallic hitting drum patterns and at the start using almost acoustic like sounding kick drums but yet still managing to make the song sound up to date and present with a well balanced mix and match of percussive and synth/keyboard sounds.

Evolution of Tomorrow - Keeping listeners guessing throughout the album, "Evolution of Tomorrow" is no different with a totally different intro to previous songs with the heavy use of string arrangements playing the progression along side a repeating bass line. The strings are also used in the chorus alongside Javis powerful vocals and the both work so well together with a catchy sing along chorus alongside well-placed progressions really does make it a well-put together song.

"Primitive Ways" - Now for the albums closer Primitive Ways opening with vocals in acapella and one by one drums and synths coming in one thing that really shocked me in this track was the use of guitars in places just when I thought they couldn't surprise me anymore they still have more ideas to pull out of the hat however with this new addition to the song it still sounds coherent with the rest of the album and sounds well balanced throughout till quietly slowing down with piano throughout to the end I thought the multiple layered vocal harmonies were also a cool little addition to this too.

As well as getting 14 great original track as always with DWA releases you get great remixes too from the likes of Reaper,Nachtmahr,Grendel and the always fantastic remixers Die Sektor and when things couldn't get better these remixes don't disappoint totally adding there own spin and really do fit well within a DJ set with ease.

So : My thoughts : wow probably one of the strongest and freshest debuts I've heard in a while musically a great mix of sounds and layers that really does give Terrolokaust an identity but also a sense of individuality too and still manages to be quite heavy in places no matter how melodic the direction is. And the vocals are some of the best and most powerful vocals I've heard and work extremely well alongside the music throughout and manage to like the music keep it melodic but still keep the aggression there. Javi and Indio have both shown throughout this album the versatility they are both capable of and make me curious for future releases on DWA. I'm going to give God Loves the Violence an 8.5 as this is a very strong debut on DWA and shows the quality the label is capable of putting out.

We don't have any stores registered for this release. Click here to search on Google
Terrolokaust - God Loves The Violence is available at POPONAUT from 13,95€