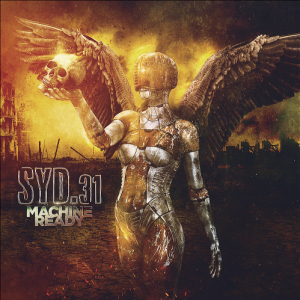 8.0
"Great"
Released off label 2021
Industrial, Synthpop
Genre-wise your standard internet denizen would be quick to label SYD.31's latest opus "Machine Ready" as industrial metal and call it a day. In reality, however, "Machine Ready" is an evolution for SYD.31 as a whole. This creative spout came from COVID-19 enabled restrictions; leader of the trio Dr Magic was unable to communicate nor collaborate as he normally would with other musicians on the album. Thus what we're seeing on the album is not a group effort but a solo one wherein Magic takes inspiration from everything that he loves. From the inspiration he found in looping techniques from hip-hop changers Eric B and Rakim and NWA, to the horror-punk style of Misfits and The Damned, Magic looked to every band that had ever worked their (get ready for this) magic on him. Thus, "Machine Ready" can be called an industrial metal album by the lazy listener, but it has so much more under its hood that to call it that is to not understand the album at heart.

A quick intro plays for forty-two seconds and it sounds like a flying saucer is landing on Earth in an old-school science fiction movie. While it was a good sound, I could not find reason as how it connected to the rest of the album. This cinematic synth work is quickly put to rest when 'Broken Blank' plays. Magic's gritty vocals, strained and growling, are just as ferocious as the horror-punk inspired guitars. Traveling at one-hundred and twenty miles per hour, the speed at which the drum'n'bass backed song travels matches the overall drug-induced mental health crisis the song is about.

After another bout of guitar riffs and drum'n'bass madness on 'It Came To This', a slow groove caught me off guard. 'Imminent Failure' has a great bassline that pulsates and slams into my aural senses each time it bumps even though it's a quiet drop. Mixed with acoustic guitar and saddened synths, I felt as if this was a song that would be at home accompanying someone lost in the desert. Magic changes out his tough screaming for slightly raw whispered vocals which greatly accompanied the single. However, just as I got comfortable with the beat, all the sadness turned into rage and aggression around the two-minute mark for a half-minute. Guitars riffed, drum'n'bass went wild, and Magic screamed. After that short break, a mixture of the original beat and drum'n'bass climbed into round two of the chaos. As much as I appreciate Magic's rough side, I couldn't help but feel dissatisfied with how the song turned out. The beauty of it within the first two minutes, if only continued for another minute or so, would have been such a huge deviation from the rest of the album. It is still a good song, nonetheless, but it could have been better.

I did not let the initial piano ballad of 'As They Let You Down' catch me off guard on the first play; I knew that Magic was bound to break into further drum'n'bass and horror punk goodness shortly. And it did; heavy breathing, like that of someone inhaling and exhaling through a gas mask, came in as the piano stopped and I was marched straight into similar mechanics previously showed off on the album. What was surprising to me was when I went into the following track 'Collapsing New Stars', which I expected to get angry and slamming at one point or another, but never did. Instead I got a 70s inspired funky song all capturing the wonder and nostalgia of youth. Magic's vocals are clean and well-sung. To be frank, I enjoyed this vocal style a lot more than his strained and gritty shouts. Well done.

More metal meeting drum'n'bass is found on 'Demon Night', but the following song is the ballad that I was hoping 'Imminent Failure' would have been. Magic returns to clean vocals with an empowering beat. Ambient guitar and moody yet substantial percussive elements rocked throughout the song until the very end. The beating percussion on 'Disassemble Me' with the modern blues guitar playing above the noisey riffs is simply awe-inspiring. If there is any song on the album that could be labeled as strict industrial metal, then it would be the title track. 'Machine Ready' is a title that does not lie; what sounds like the whirring gears of a mech come through at various intervals. I can easily see myself jamming out to this track during a weightlifting session.

The next to last track 'We Turned The Lights Out' simply was not for me; I have never been a fan of dub music and that's exactly what the track is influenced by. This is the only song on the album that I skipped over after successive plays; I gave it a few shots to sink into me but, sadly, just as with most other dub songs I've heard in my life, I just could not appreciate it. The outro song was alright; it's a well produced, eerie, hip-hop inspired track but I felt as if it didn't really fit in with the rest of the album. When I hit this track at the end of the record, I was more or less wanting to skip it and the intro so I could get back into the meat of the album.

Thus I hit the end of "Machine Ready". Several spins of "Machine Ready" has caused me to love it; this is the best record under Syd.31's belt to date. Sure, I have my complaints; I'm still disappointed by the outcome of 'Imminent Failure', but it's a good song nonetheless. The intro and outro I skip each time I listen to the album, but those two songs combined barely make up a chunk of the album that they hardly matter to me. And, yes, the dub song is a track that I dismiss entirely. But this does not beat out the fact that I'm still left with eight additional tracks that I find to be dazzling and mesmerizing through and through. Dr Magic flexed his creative prowess entirely for "Machine Ready". Despite Magic getting and pulling inspiration from various other artists, bands, and musicians, he has done what a lot of other projects fail to achieve: he did not imitate them, but styled his own brand of song utilizing similar techniques. Because of that and his unwavering perseverance, I easily award "Machine Ready" with an eight out of ten.

This review was commissioned through our Ko-fi page.

Bandcamp
Various Artists - So80s is available at POPONAUT from 20,95€

Ashbed - 'If We Should Part'