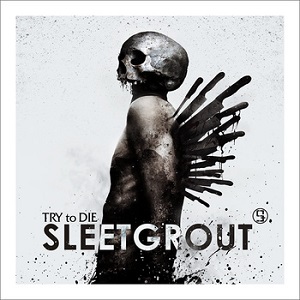 Spotify
Released 2014 by Insane Records
Dark Electro, Harsh EBM
It's been about two years since We Had A Carnival released and Sleetgrout comes back hitting hard with Try To Die. Both abrasive and soothing at the same time, the sound has evolved a bit more, trying to tone down the screaming in favor of more solid, emotional vocal sets. As always, fans of old may bitch and complain, but I find it pleasurable to see an artist attempt to do something new in comparison to remaining stiff and stale.

The trio of dark electro with dance melodies enthusiasts have also called in the very lively Suicide Commando and Mexican project Cenobita, collaborating on Jest#9 and Call The Lord respectively. There are also a plethora of remixes available; some are exclusive to either the physical or digital copy (I'll be covering both), so you may want to check out the remixes to see which appease to you more.

Now, at the start of the album, with On Fire, I was a bit disappointed. The song sounds good instrumentally, but the vocals were just a bit too slaughtered for me. The dance like beat with a steady bassline and nice synths went well, though, so I wasn't giving up at all. And I was so glad I didn't, because the rest of the album was fucking killer.

The Strings picks up the rubble that was splayed before me, and thrust me into another dance song, but thrust out really decent and clean vocals with sparse vox effects accompanying them.

This Light had a fairly synthpop-ish feel to it in the beginning, coming off really light with some digitally enhance, somewhat robot like vocals alongside some low whispering before slamming right into another song with a strong beat. Trance laden, techno-ish in a sense, and with slightly growling vocals, this song knows how to keep your feet moving.

Jest#9 brought out the evil within Suicide Commando, adding his abrasive voice to the music produced by Sleetgrout. Commandeered with an organ sound, the differing vocals helped change up the song. The song wasn't all too club centric, which helped the album from drowning in too much of the same.

Try To Die hit right back with more high end beats and managed to bring out a more optimistic sounding song despite the title. I don't dance at all (or I dance horribly), but I found myself wiggling my foot to the beat which is something that I do when I'm really enjoying a song. The foot knows all.

Switching back to a more low, whisper/growling like vocal set, Coffin With Two Suicides continued the trend of having a nice club friendly track. Trance elements can once more be found, though I think that goes for a majority of songs on this release.

Going into a darker territory, Alcohol Trouble really heeds a darker beat. There's a pretty cool part in the song where the beat slows down and distorts slightly to render a musical interpretation of a drunken buffoon. It was pretty interesting, and I liked it.

The last song before the remixes hit is Call The Lord. Once more, the organ effects are brought out for this collaboration effort with Cenobita. This song sports perhaps my favorite beat with the choir samples plaguing the background during the instrumental parts. It worked ferociously wonderful.

Now, onto the remixes. I wanna first cover the remixes that are present on both the physical and digital versions. To boot, Amduscia remixed On Fire. Though I still didn't really get into the vocals on this version, the beat was alright. Nothing to get too ecstatic over, but nothing to really rear your head at either. It was alright.

Cygnosic submitted a shorter version of The Strings. Definitely maintaining a sort of 80s sci-fi, cyber punk vibe, the remix played with the synths in stellar fashion. And it was perfect length. It came in, it got out, and left me wanting more.

Next, those Alien Vampires input their wonderful talent into Jest#9. Bass heavy and fast paced electronic floating about, the remix did well in adding an extra kick into an already well done song.

C-Lekktor, as I always love their remix work, still wasn't able to transform On Fire into a song I could really sit down and enjoy just due to the vocals. I still dig the instrumentals, but can't get through it due to the amount of vox effects placed on the vocals.

AktiveHate put some lovin' towards The Strings. Beautiful organ work and choir samples started off the song and continued into the main beat of the song. I thought the guitar work sort of ruined what was going on, and the choir samples became a bit annoying once the guitar hit. However, it wasn't all too bad, but didn't really suit me too well.

And those were the remixes that were available in either edition. Here is where they start to split. To start off with exclusive remixes, let me point out the CD versions differentiation. Try To Die got another remix from Die Braut. I enjoyed the electronic effects used in place of the original, but I still enjoyed the canon version over the remix.

Nano Infect came along with a remix for The Strings. Though I felt it took a bit long to get to the main chassis of the song, once it finally hit, I was able to enjoy myself. Darker than plenty of the other songs, I felt as if the vocals could have been suited better within the song, in other words, I felt the beat was just slightly off.

Perhaps the most interesting mix I came across was of D.T.F.N.'s play on The Strings. Lighter, performing a more faded electronic approach to the song, it was odd. Different from everything else, and going in its own direction, I was rather shocked by this one. Not saying that it was the best, but it was certainly different.

Lastly, for the CD, came along Produkt's mix of On Fire. Again, I couldn't get over the vocals, but the effects seemed to have calmed down in this song. Not only that, but the overall beat was really well done. So, kudos to this act for making this song enjoyable.

For the digital version, I got the lovely treat of listening to Terrorkode's faster paced rendition of Try To Die. The vocals overpowered the music and left for a somewhat unprofessional sound. Given a better balance between the two, I may have been able to enjoy myself much more.

Viscera Drip handed out a decent remix of The Strings. Maintaining a similar beat to the original, it seemed as if the bass was touched down, and that a few more electronic effects were added in.

Mordacious remixed This Light to an alright degree, not really impressing me all too much, but not disappointing in either sense. In comparison to the other remixes on this album, this on doesn't really stick out all too much.

And, the last and final remix to discuss would be Obsidian FX's remix of The String. Really tearing away from the roots of the song, FX does a wonderful job of rendering something new. It was joyous to listen to, and I give them props for being able to do a good job.

Now, that's the end of another pretty damn solid album from Sleetgrout. I do express some disappointment in not being able to grab all the remixes from one release, and having to shell out more money for all the remixes, it's still worth it in the end. But, if you're planning on getting the physical version, be sure to do so soon; the album was released today, and by the time I'm posting this article, there are only 97 copies remaining. Get it before it's gone.
# sleetgrout
# insane-records
# try-to-die
# suicide-commando
# cenobita
# cygnosic
# amduscia
# die-braut
# alien-vampires
# c-lekktor
# aktivehate
# nano-infect
# dtfn
# produkt
# viscera-drip
# terrorkode
# mordacious
# obsidian-fx
# dark-electro
Jun 22 2014
Shrine - 'Nihil'
Previous article
Nahtaivel - 'Pon Farr'
Next article

Bandcamp (Physical)
Bandcamp (Digital)
Sleetgrout - Try To DIe is available at POPONAUT from 13,95€

Sleetgrout - 'We Had A Carnival'