Servitor - The Forest Crept Back Into The City 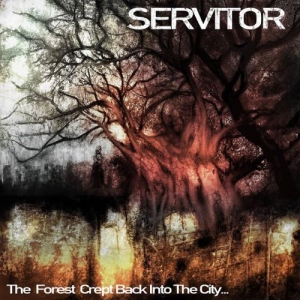 8.0
"Great"
N/A
Electroracle
Released off label 2016
Tribal, Industrial
Whenever I hear the word "tribal" used to describe a band's output, I usually roll my eyes and think, Another one. It is not because the band is necessarily bad at what they do or that the music I'm about to listen to is so distasteful that I wanted to cut my ears off forever, but my apathetic feeling comes from the fact that most bands really do not know what tribal beats sound like. Just because you threw in a looping drum rhythm as background noise on top of the harsh noise or everyday droning sensation I've heard a million times over does not mean that it is tribal; in fact, I would rather classify it as trash. But, you know, there are some people out there who deal mighty fine ritualistic rhythmic drum rolls out for everyone to enjoy. These few and varied people understand what makes tribal, well, tribal. Today I would like to point in the direction of Sean Malley.

Malley's name might appear familiar to anyone who has a love for the experimental/tribal/industrial group iVardensphere, as he plays for the heavily praised group as a drummer. But we will not be discussing his involvement with iVardensphere much at all right now; we will be focusing on his solo project Servitor. The name Servitor means, in less words than needed, one who serves; this can be used in religious or spiritual context, but also in lesser forms such as an employee doing grunt work for management. I highly doubt that Malley chose the name for the second reason, but rather uses it in the first.

The earliest material I have discovered from Servitor would be his 2010 release on Octofoil Records The Marriage of Earth And Iron. While digging around I haven't found much about it, but there has been some praise for it here and there. His bandcamp page shows off his entire discography, and aside from Remixes, Geekery, and One Shots and an Angelspit remix, there seemed to be a five year gap between making tunes for Servitor. But, in November of 2015, it seems as if Servitor rolled out all the magical music making powers he had as an EP and two full length albums released all at the same time: Beats To The Ground, Creepy Trees, and The Forest Crept Back Into The City. While all three are definitely deserved to be looked at, I'm going to talk to you about the third mentioned one today: The Forest Crept Back Into The City.

The first track on the album, 'Bruigh an Cnaipe' might mistake some listeners at first; organs that belong in a Catholic mass play out, but are soon assaulted by rapid drum pounding with a bit rhythmic noise behind them. Warrior shouts like that of a Native American defending his homeland in the 1700s continue throughout the song, and the organs do not let up; they always hold up as an uplifting background noise.

In the same vein, and almost as a continuation to the previous song, 'Branchbaila' continues wicked drum poundings. If anything, these songs sound as if they belong in a heartpounding post-apocalyptic chase scene. Malley's vocals come alive in the track and ring out like a bloodthirsty warlord ready to tear open the nearest flesh they possibly can - be it friend or foe.

'Root Room Doom Boom' is the most fun track on the album; I can see everyone and anyone enjoying this track as its played on a dancefloor. It is a bit dancey, still tribal, but it will make your feet start to move - or at least your head bob a little. 'Kanda Ruskar' is the first track where drums are equal - and not more dominant - than the electronics that coincide with them. Perhaps this track was a bit reptitive, but I enjoyed it nonetheless.

'Donustermek' had nice ambient and static backings to them, and once more sounded like a track that would get a tribe of warriors ready for combat. If all these tracks before got troops riled up for combat, 'Haz Rumpus' is the song that's used as a marching rhythm. If I was a general in the military, I would be sure to have my soldiers march to this tune as often as they can; I would imagine it would keep their wits sharp and their morale high.

'Boom Ra Tek' moved from minimal drum work to lightly backed percussion rhythms, but nevertheless stayed simple. 'Kuzama' went into an all out brutal assault both vocally and rhythmically; if this plays on the dance floor, be sure to go nuts. 'Bassor' has its first half sounding as if it would be perfectly fit as a jungle's theme, but then switches into a tribal/house mix-up in the second half. That was a very, very enjoyable twist that I did not see coming.

'Bli Mig Lite' went back to a simply rhythm, mainly focusing on atmosphere and samples from various arts to crack out nicely. Plus, the ending of the song was beautiful. More glitchy samples and a light but frenetic drum rhythm played through 'Spindle Sindle Six', while 'Sinte Sagaia' moved back to energetic grunts and savvy drums. 'Jaeghora' was very experimental; while one of the more cluttered songs on the album, I think the claustrophobia has a certain appeal to it.

If you would like to hear a song where the rhythm just gets faster and faster as time ticks, look no further than 'Kuku Cantorum'. Servitor even stated on his Facebook page, "I had to practice the rhythm for a few months at that speed before I could actually play it at the tempo I wrote it, The djembe 2 part, is particularly tough at that speed. I think you'll all agree that the pacing and energy of the second half is pretty damned furious." Yes, I do agree with you Servitor, I really do. I wasn't a huge, huge fan of 'En Arca'. That's not because it was a terrible song, but it just felt as if the song was somewhat a replica and repeat of the songs before it. Again, not bad, just repetitive and unnecessary. Lastly, 'Turtle Island' was a very, well, odd song for what the rest of the album was. Malley and a second voice both chant as presumably Malley works the drum. There are no electronics involved; it's pure and natural.

But, what a rush this was. I really can't say I've heard anything else like this before; it is unique and Malley is proud of the work he's done. Whether he is invoking the post-apocalypse in the vein of Mad Max or taking a more spiritual and healing trip with these drums, Malley is certainly a driving force to be reckoned with in the tribal scene. What makes his music so great, however, is that he actually makes his music tribal; he doesn't just use it as filler content. He understands the drums and loves them; fuck, maybe he is a drum (I'm just kidding about that one.)  Anyway, Malley is a wizard with his hands and percussion based instruments, and now I'm off to further myself in his other albums. Good day.