Sarcophagic - Birth of the Betrayer 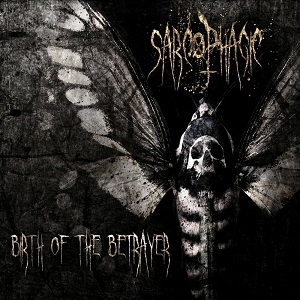 Spotify
Released 2014 by Xperiment XIII
Industrial Metal
You know, when it comes to industrial metal, I always find that I'm usually in a disappointed state after listening to an album by a band within the genre, let alone a song. Therefore begs the simple question as to why I feel this way. Well, fact remains, as a lot of people have both mentioned and noticed in the past, that bands who categorize themselves within the industrial metal group forget about the whole "industrial" aspect of the style completely. Forgoing the experimental nature of industrial and trying to infuse it with the metal genre, they usually add in few electronics and the usual drum bashing and guitar shredding, becoming more or less the standard metal band. But, thankfully, I've come across a band that embraces both cliques in an equal and fantastic fashion. And this is why I wholly welcome and thank Sarcophagic for ever coming into existence.

This band consists of a trio of dudes (Heretic Prime, Rob Samhain, and Rage, respectively) who formed in January of 2013. Originally basing their material from Heretic's solo days underneath the project name IRONHAND, they found their own little niche thereafter. A small performance at a bar in NJ was followed by a demanding encore from the crowd, and it was soon after that Birth of the Betrayer was released.

Of course, if it wasn't for the partnership with Xperiment XIII, then I would have never found out about these guys in the first place. Now, the original version of Birth of the Betrayer, dubbed by the band the Postmorumn Edition after the label it was released on, consisted of fifteen tracks with a few different tracks names involved. But, now the band has gotten the album much more polished from that of the past.

A new tracklist is followed in the new modified version, dubbed the X-XIII Edition by the band, new physical media including a special little collector's package, was remixed and polished by Heretic Prime, mastered by Jan Loamfield of X-Fusion, and includes music production and art by Tomoki Hayasaka of Sheerheart. As much of a mouthful that may be to say, it is nonetheless impressive, and is an effort that few artists take when they're re-releasing material. Rather than just having a remaster, they pretty much went back and made a good album even better. Not only that, but the physical CD was mastered in such a manner that each track flows straight into the next, making for more of an entire listening experience rather than a track by track experience.

All that's left to talk about is the music itself. As I said before, the reason I fell in love with this band was there knack for completely embracing both the industrial and the metal aspects of industrial metal; fuck everyone else in the genre who just adheres to garbage trash sound and cyber junk. These guys are fucking dark and rip out their eyes, stick them in a blender, and shove them down our throats only to have us asking for seconds.

From the opening, cinematic and terrifying moments of Prologue-Operator that incorporates all sorts of sound effects with a thumping bass in the background, ambiance built behind it, and disturbing noise fluttered with samples, to the six and a half minute first dive into the vocal shrieking Satan und Gott that demonically blitzes us with a fury that Hell hath never seen before, this album was a pure winner at first listen. And my heart has only grown fonder for the album with each pass through I've had thus far.

Grasp the epic drumming and sludgy ambient works that come blasting out of First Cut - Skrik Pt 1 as you're torn from piece to piece, and find more to love and get completely wrecked by in Hammer. The absolutely stellar synth work in My Factory blended a bit of symphonic metal into the overall outing, but did not take over completely; no, this band knows how to balance it's sounds way too much to allow such a silly thing to occur.

The poignantly titled Digital Hitler completely roars forth with fucking amazing drum work paired beautifully with more metal influence, and the sound of an army cheering just completely bolstered the overall theme of the track. More synth work enveloped All in Ashes, crafting a beautifully organic and spitefully end-of-the-world like sound that was just completely appetizing to my taste buds.

Continuing to show their mastery for their sounds, Violence bolstered the album that much more, while In Fire actually brought forth more of an electronic sound to the album. Beautiful still, the metal influences never dropping at all, there is no reason not to love this track. And then a bit of a break is served with Chrysalis. Ambiance mixes with a small rhythm, choral effects, and a deep feeling of something terrifying lurking around the corner just settles in. Of course, the song occasionally pushes out heavy instrumentation, fusing both the calm and the wicked in one healthy package.

Slower moving at points, Field of Human Candles has some of the best guitar work on the album in it; moving and uplifting in some senses, the vocals went extremely well with this song, sort of having a suffering tone to them. And then comes in Last Embrace - Skrik Pt II. I almost want to leave this one a surprise, as the music video for it just released and can be viewed below, so, I'll let you discover that one on your own.

And, lastly comes in the epic near ten minute long song Pile of Butterfly Wings. Normal, non-screaming vocals come in for a while, alongside some nice piano music. But, you just know from the ominous sounds that this isn't to last forever. A little after three minutes, the devilishly good screaming, and purely on spot drums and guitars both prove that point to be true.The track ends amazing, with whispers going on and on, a war drum pounding away in the background, and finally ends on sullen note. With that, I come back into reality.

But, in all honesty, I already missed the twisted world Sarcophagic so chose to make for all of us. Though it was a Hell ride from the first circle, straight down to the ninth, I made it through with a serrated grin on my face and murderous intent on my mind. For a band that I've never heard of, I was amazed by what they were able to do; this album is more of an experience than it is music. I think to simply call it an album, to simply call it music would be a sort of insult; this is something more than that. It's a complete work of art, a cacophony of the labor of love these three gents have merrily put into this album. And it's paid off greatly.

I'll be damned if these guys don't start garnering a bigger and dedicated following soon. However, for now, get your copy from Xperiment XIII. It's well worth it.
# sarcophagic
# birth-of-the-betrayer
# industrial-metal
# xperiment-xiii
Dec 27 2014
Ded.Pixel - 'Form.Follows.Function'
Previous article
Citizen 16 - 'Temptation'
Next article

Bandcamp
Sarcophagic - Birth of the Betrayer is available at POPONAUT from 12,95€

CUTnPASTe - 'Kill em All and Come Back Alone'