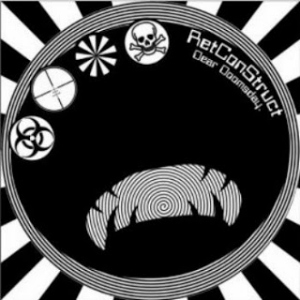 Spotify
Released off label 2012
Dark Electro, Electro-Industrial
Hailing from Silicon Valley, and presenting all the hooray of a Sci-Fi themed act, RetConstruct are a curious duo. Consisting of their "Synthetic Division" (Guy Valdes - songwriting) and their "Organics Division" (Jill Valdes - Lyrics, content, vocals), I'm reminded of the trans-planetary concept that Siva Six recently took us on.
With an album produced by X-Fusion (XMP), a cover that is completely unexpected yet provides good eye-candy, and a lyric sheet that reads like a freaking doomsday letter, I'm looking forward to this demo before I even press play.

For this review, I'll resort to an uncharacteristic track-by-track. Hang on to your seats!

Inevitable Retconstruction - At 2:40, just seconds behind the closing track, this suggests a familiar pairing of an intro/outro coupling. It opens with a heavy, drone-like bassline, heart-beat pulses, and a wall of power electronics before a typically sci-fi influenced sample kicks in. It lasts for most of the song, and is met with a robotic female sample, all played over the top of a militant drum style.

Orbital Outpost Empyrean - Intriguing title. Opens with a heavy synth line, not immediately like anything I can recall, and builds into a powerful drum/bass combination. At its heaviest, it's almost power electronics, but the main synth that kicks in at 1:03 is both heavy and stupidly melodic. Vocally, I'm not sure what to make of it at first. The voice is heavy, slightly distorted, and is half-robotic, half-human. You can imagine this narrative being set a few thousand years into the future and it becomes justifiable. This is really heavy Industrial - It's almost Alien Vampires at their heaviest, but given a futuristic approach. From 3:25 onwards, the bass is among the most fluent in my collection, and the song is almost a scrambled mass of chaos - it shouldn't work, but it does due to the concept here.

Virtual Hero - More melodic than before, featuring a different and more traditional drum section (it's more akin to that found with Nachtmahr, Combichrist et al). It's definately a track that defines RetConStruct - lyrically it's more simple, but still full of intrigue :

"Ruined by Rapture
Drifting in Torpor
Floating in zero
Save us, shield us, sate us
Virtual Hero".

As it stands, my only issue with this album so far is the distortion on the vocals, which although complimentary to the idea and concept (I keep reinforcing this, apologies), seems far too overdone and incoherent at times.

The Maelstrom - Seemingly about some sort of deluge, this track is closer to traditional Industrial than anything before, and with consistency to the rest of the release, it's very, very heavy.

Legion of Dolls - Difficult to contain verbally, this track is all about synchronisity and word play to form some intriguing lyrics. It would be a favourite on the album, but unfortunately the vocals are just too distorted.

All Gone Awry - Now we're talking! Musically my favourite so far, it's both eerie and diverse. As close to 'club' as a track on here has got so far, Jill's vocals on here are almost stripped of distortion, and her natural voice has revealed itself, as if the group knew what I was going to criticise. She has a harsh voice on here, not dis-similar to My Ruin's Tairrie B, but Jill is at no risk of harming her larynx - she's got a clear grip on how to use her voice sparingly, and the earlier distortion becomes something of an afterthought.

Dear Doomsday - Being the title track, I expect this to be one of the memorable numbers on here, and the intro to it gives that impression. The other issue that this group have is prominent here - with a verse that reads :

"The false are fantasizing, their myths are mesmerizing, their means demoralizing, darkness descends
The diseased are disguising, their maladies enticing, whose spread is not surprising, lies and pretense
The starved are sacrificing, the selfish supervising, this system not sufficing, progress suspends
The doubtful are debating, the damned are demonstrating, the wronged are orchestrating, the grand old end",

it's like they're trying to cram an entire story into each song, which is a fantastic idea, but it then feels like they're not sure how to form a vocal melody around it without forcing a tune by cramming as many words as possible into a short section. It ends up half spoken, half sung, and they're able to make a sturdy vocal out of it, but to me it doesn't quite seem comfortable. I'll take it over generic lyrics, though!

Dark Days - The track has more of a spacy feel to it than previous ones, and it's given it's own compressed identity. After a few listens, it doesn't stand out as one of the sellers on the album, but it does have a beautiful solo vocal running through it that's one of the bigger surprises on 'Dear Doomsday'.

Somnial Sanctum - Lyrically my favourite on here, it discusses virtual mausoleums, and space burials, among other things.

Access Infernus - Power Noise - the bass is insane, the speed of the vocals is insane, and it's as coherent as a bumblebee to the brain. It's occasionally relaxed by some static in the background, and the synth that is audible is pretty evil.

Embers of Eden - Excellent song title. Slower than most tracks to begin with, it dares to hint at something majestic and inspiration seems affluent. It seems to be about exploitation of natures resources (given, of course, a sci-fi retelling).

Invasive Species - Conceptually the cleverest track on here, it falls somewhere between melodic and abrasive.

Complete Retconstruction - Syncs with the intro to end this album with a wall of harsh Electro.


So, this is going to be hellishly hard to summise.
The album has some great moments :

- The idea of this album, which courted with the song titles and lyrics makes for a clever, very well thought out and originally designed story.
- Jill's vocals are potentially the harshest female outlet in Industrial.
- The moments where a melody interrupts the harsh sounds always catches me off guard.
- The Bass is fantastic.
- The album is very well produced, and nothing is hard to really hear.

Now, I need to be unfortunately critical. My biggest concerns are :

- Too much, too soon. There's a massive amount of ideas crammed into each song, and I think the duo have struggled to make a good vocal melody out of each set. I don't think it's unfixable, but it's tested their resolve - many of my favourite bands would struggle to do what RCS have done here, so I salute them highly for the attempts.

- I think the vocals are too distorted, and at times many songs sound too similar and too heavy. I've found it hard to follow on occasion, and that's a little ugly. I think it's balanced out well with the finer moments.

- A little genre confusion, the band claim to be Electro-Industrial, but it's equal parts Power Noise as well.

The criticisms may seem heavy, but really it's down to you as a listener. Everything good about this album outweighs the bad. Guy and Jill are very intelligent, and a huge amount of labour and passion has clearly gone into this. Both know what they're doing, and both work together fantastically.

This will appeal to Industrial fans, but it comes with a warning - they made something so hard to fulfil and so ambitious that it became a nightmare to write. They gave it a valiant shot, and it left an impression.

I think that actually, this act will go somewhere, but I'd urge them to discuss my concerns with me - they're not major, just very prevalent. May 19 2012
6.aborted.6.fetus.6 - '6Aborted6Fetus6'
Previous article
Shrine - 'Somnia'
Next article

We don't have any stores registered for this release. Click here to search on Google

Ashton Nyte - 'Some Kind Of Satellite'