Quieter Than Spiders - Signs Of Life 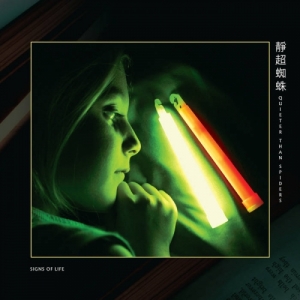 8.5
"Great"
Released 2019 by Anna Logue Records
Synthpop, Minimal
Quieter Than Spiders formed in 2012 in Shanghai. The group consists of Leon, Yao and Yifan Zhang. The three are all related but prefer to leave that in the background and let the music define the group.

The album was recorded in Shanghai and the United Kingdom. The members looked for alternative ways of recording to capture the sounds and feels they wanted. For example, the use of minimal equipment allowed the band to move around into remote areas to record from buildings in Shanghai that were to be demolished, to a tunnel within the English countryside. With the mindset of fully devoting themselves to creating an album by experimenting with off the beaten path recording techniques they had to not only self-produce the music but have it mastered by someone who can help the band achieve the results they wanted. Steven Bornhorst also known as The Silicon Scientist achieved this perfect interface between himself and the Zhangs demonstrating a well-documented artist/mastering technician symbiosis worthy of great admiration.  If you are familiar with the Silicon Scientist you will feel his presence in the 28 dark and moody tracks laced throughout the album and everywhere else.

Musically, this is a well planned dreamy journey into the unknown demonstrating the artists and their commitment to the perfect sound. Quieter Than Spiders drifts around the synthpop realm mostly, but they are very creative and find ways to showcase some chiptune and minimal influences. Throughout the album you'll find 8 tracks with Roman numerals before the title. These are interludes that lure the listener into dark and melancholy places showcasing different ways of expressing that dark and moody zone Quieter Than Spiders want to take you to. Each of the 8 interludes holds it own sound well outside the synthpop realm and more into soundscape and experimental boundaries.

As for the album, I found myself quite fascinated with "No Illusion" with its minimal beats paired with an airy feel and excellent synth arrangements. The tempo shifts and the light breezy vocals design a setting that leads to a powerful opening to "Signs Of Life" 2LP album that contains 28 songs. Many times the first song is the song that can make or break whether the listener chooses to continue the listening session. Shall we continue? Absolutely!!! "Night Drive" is another one that really dives deep into the Zhang skill sets in programming and arrangements. The intriguing instrumental  churns out some memorizing and very captivating synthwork. "Night Drive" is constructed in such a way that all of the parts seem to have found an organic harmony to allow each piece to thrive individually and yet retain a wholeness needed for a great song. "The Land Of Lost Content" has the same drawing appeal as the previously mentioned tracks. The vocals really dominate during the chorus then take a step back and let the music take control. "Shanghai Metro" is a fun track with a mix of vocal samples and robo-vocal treatments, that I presume be train schedules in Shanghai. "Hibakusha", on the surface could be seen as an attempt to bring awareness to the past or could be the early stages for some sort of polemical stance on the current state of political and economic ideology. We feel a superficial gentle approach to the subject on the outside, but most can't identify with the deeper meaning the author was influenced by. "Hibakusha" stands out as a haunting anthemic approach to defining a new benchmark for modern synthpop. Quieter Than Spiders breathes rarefied air for sure. The first 18 tracks take you on a tour through the completed stages of music theory, production, programming, mastering and execution. Quieter Than Spiders web extends well beyond the initial album tracks with some well established artists that represent the dimly lit corridors of underground music very well.

Tracks 19-28 are all remixes by Quieter Than Spiders, Delayscape, Micro Cheval, Vile Electrodes, Jonteknik, The Silicon Scientist and Kevin Komoda. All remixes offer alternative versions of the the album tracks that really break off into some interesting directions.  Micro Cheval`s revision of "The Land Of Lost Content" feels the presence of  Laurene Esposito`s dreampoppy vocals paired with a slightly quicker pace. No Surprises here, The Silicon Scientist's rework of "No Illusion" is masterful. I was blown away by The Silicon Scientist`s Outside The Night 2LP back in 2015. Everything that Mr. Bornhorst touches is magnificent.  Vile Electrodes extends "Shanghai Metro" to 7 minutes of blissful pure chill. Delayscape have a ton of high quality electronically diverse releases on various labels including Anna Logue Records. Delayscape infuse IDM/experimental influences set to darker synth foundations. This certainly holds true for the 3 Delayscape crafted for the remix portion of Sign Of Life . Jonteknik is a writer, producer and remixer out of the U.K. influenced by Japan, Depeche Mode, Kraftwerk and Underworld. He also worked with Paul Humphreys of O.M.D. Naturally he adds his twist to the mix with some minimal undercurrents that gives "Hibakusha" a slightly different technical feel. Check out Jonteknik's latest on Bandcamp and  explore deeper into his vast catalogue. Why not have a former member of Rational Youth commit to do a remix? Kevin Komoda played with Rational Youth in the early 80's and was part of the greatest synthpop album ever made in my humble opinion. He later rejoined the group, but as far as I know he is not part of the current line up. The remix has a Cold War Night Life layer making it a geek out fest for Rational Youth lovers. All of the artists featured on this release have some amazing music and merch available. Vile Electrode's In The Shadows Of Monuments album is a perfect example why one should always look into the remixers' own work. You can be pleasantly surprised.

Quieter Than Spiders seem to easily find ways to create a fresh sound that has an uncanny way of connecting the listener to the individual track in one way, and the album as whole in a completely different way. From the album tracks to the remixes, there is a seamless flow of all 28 songs. Quieter Than Spiders may be under the radar for now. They  are content with their brevity and will let the music speak for itself. This is a must have and will certainly find its way on to many album of the year lists.

Bandcamp
Quieter Than Spiders - Signs Of Life is available at POPONAUT from 23,95€