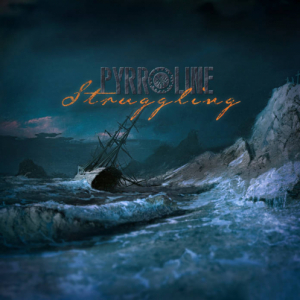 9.0
"Amazing"
Released 2021 by Electro Aggression Records
EBM, Industrial
Like a well executed ritual, Pyrroline releases yet another album in their usual four year timeframe. Pyrroline fits well on Electro Aggression Records as the label's ethos is about quality and the time that it takes to get a perfect sound. The process is slow and deliberate and like everything on this label so far, yields impressive results.

So Pyrroline began under the moniker Nordschlacht with their first album Silence, Beauty And Cruelty back in 2007. The track "Collapsing Centuries" appeared on the compilation Klandynamische Bewgung Vol. 1 and was an instant attraction or perfect introduction to the duo Schmoun and Arnte now known as Pyrroline. I remember covering a shift at the legendary Cafe Soundz in Montclair, New Jersey for my buddy Bob, the owner. I was always happy to cover. Anyway, I did not ask to be paid for working that day, but Bob insisted I take at least a CD. I chose the Nordschlacht. It's great to have a nice memory attached to an artist you like and respect.

Struggling is the fourth album as Pyrroline and fifth over all. There are several intrinsic qualities to what Pyrroline does. Both Schmoun and Arnte have become naturals with their fastidious approaches to programming and arranging compositions. They are both fiercely loyal to their overall sound. You will find patches of predictability as well as moments of epiphany all encompassed in a precise, slow-buring promethean electro-industrial chassis. Struggling inserts itself right into the sensory receivers and it is then that its work begins to manifest into a trance-like state that can last for the entirety of the album. I have stated before that individual Pyrroline tracks are solid on their own, but when you take the entire concept of all of the songs flowing the way the artists Schmoun and Arnte meticulously arranged them to be, you will find the next level of appreciation for the whole. Each track fuels the next until the journey is complete.

There is an on- going aura of mystery to much of the lyrical content. You can look into the last album In The Dawn Of Freedom and see a political approach on the surface yet Pyrroline stays very clandestine in the true meaning. This is the same approach on Struggling. Struggling as a word hits at the very heart of human frailty. Over the last year plus, the world has been trying to recover from a global pandemic. It has been a struggle to deal with loss on every level. Is this the message Pyrroline has inserted as the lyrical pieces to the tracks? It's up to the listener to interpret the message. If songs have only one true meaning perhaps that may limit how one responds to the lyrics. When a listener can tie a memory to a song and form a connection that is personal to them, I am sure that would be flattering to the artists. Pyrroline's artwork for Struggling uses imagery of stormy seas as a metaphor for the themes found in the album such as suffering, struggling, fighting, questioning, transitioning and other existential concepts.

The songs range from five to six minutes in duration. There is a beauty imbedded into the darkened layers of each of the carefully arranged and executed chapters of Struggling. After three to four times through, one would think there are no more surprises and revelations in the music. Each time through I hear something new. I want to describe the sound but there are no words to do it justice. You simply have to invest some time into listening. I try to understand as a non-musician, what Arnte and Schmoun were thinking when they created a particular sound or backing layer; at times it seems other-worldly. One example resides in "What Might Have Been" around the forty second marker. Again, it's hard to describe, but the sound is distinct and memorable. It's little things like this that really make you appreciate all that the artists put into their craft. Pyrroline holds their own quite well amongst all of the other artists out there. If for some reason Pyrroline is unknown to you and need that point of reference, here it is. If you are a huge fan of Noise Unit's Drill  and especially enjoy great tracks like "Prostitute" and "Other World" you will certainly be right at home with Pyrroline.


As we venture on to the second CD, Pyrroline has three more original tracks that did not fit on the first CD. They fit right in with the perpetual flow of music. Then we get to the EAR obligatory remix festival. No disrespect to the remixers who all do a fantastic job with their renditions, but Pyrroline is not a remix artist. These are not just a bunch of individual tracks on an album. It's an experience as a whole. Remixing these tracks disrupts the flow and in turn isolates a small five to six minute segment to one artist before it is moves aside to another artist for their manipulations. That being said, you get some quality work from fan faves like fix8:sed8, Placebo Effect, Jihad, The Opposer Divine, Terminal State, G.O.L.E.M., Sleepwalk and Amorphous. All of these artists are well-established and certainly will never disappoint. G.O.L.E.M I had heard briefly a few months back. Their remix of "Song Of Deliverance" is solid and fits more in line with what Pyrroline is about. A slight jump in the pace and some vocal treatments makes this a perfect compliment to the album version. The Opposer Divine and Terminal State both take on "Stop Acting So Small". This is one of the best tracks of the album and now you get brothers Tomas (TS) and Boris (TOD) going head to head with their extraterrestrial insight few others possess. Both remixes offer a vastly different take from the original. Tomas takes us on a diverse ride where dark electro flourishes while fusing some new beat pieces reminiscent of Liaisons Dangereuses. Boris takes his skills to produce a more sci-fi feel with distortions to some of the vocals. It gives off that feeling of extraterrestrial  terror I have grown to expect from Boris as well Tomas. Placebo Effect remixes "What Might Have Been" and "Suffer". Both remixes are very good. "Suffer" comes across very subdued and very atmospheric. It sounds like an intro or outro to an album, while "What Might Have Been" is more aggressive and closer to what you may expect from Placebo Effect. fix8"sed8 brings a military feel to the opening of "Battleground". There's a lot of cool sounds integrated into the design that really plays right into what fix8:sed8 has always done so well. Pyrroline does that as well which makes this a nice collaboration. "Who Has No Child To Die" is another top track on the album. The mighty Jihad is tasked with this remix and holds back nothing. Enchanting programming that penetrates the surrounding area backed by deeply voiced lyrics makes this a delight to enjoy. Amorphous offers a minimal electro approach laced with cool transitions. Sleepwalk remix "The Grave". It's Sleepwalk; what more needs to be said?


It's hard to pick a favorite track. I prefer to listen the album in its entirely rather than a track here or there. I feel that was the intention of the artists. I will say "Stop Acting So Small", "Suffer", "My Rebirth" and "Who Has No Child To Die" stand out, but there is not much separating the top tracks from the rest. This is an essential album that should help navigate us through this world on fire. There are five-hundred copies available worldwide. The packaging and artwork is pristine just like the music. This is an essential release if there ever was one in this genre. It's time to feel the power of Pyrroline's slow-burning, promethean multi-layered authentic audio steam roll through the apocalypse. Get it! Cheers and enjoy!

Bandcamp
Pyrroline - In The Dawn Of Freedom is available at POPONAUT from 16,45€

Pyrroline - 'In The Dawn Of Freedom'