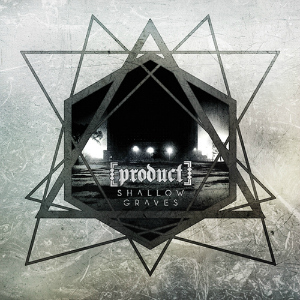 Spotify
Released 2014 by Vendetta Music
Harsh EBM
In 2013 Portland, Oregon's experimental industrial band [product] announced that the terms of their agreement with COP International had been met and they were free agents. Shortly after this announcement came an unsuspected, self-released single for a brand new song called, "Awaken the Alchemist." I used the term 'unsuspected' in the way that the band started flirting with a fairly new genre which was completely different from their past catalog, and that would be the new experimental form of electronic music called witch-house. This single gave a preview of what was to come on this year's, "Shallow Graves," LP.

It was released earlier this year in January through Vendetta Music which came as complete surprise as well - a good surprise, but a surprise none the less. I say this because not too long after the single was released, the band played in my hometown of Seattle and I had a minute to talk to the band and they expressed that they were just going to DIY it and release their forthcoming album on their own grounds. In a recent podcast the band started called 'Talking To Ghosts' it was revealed that at some point after the single was released, the band was looking into some sort of distribution deal through Canadian Store & Distribution Company, Storming the Base.

[product]'s sophomore album is quite arguably the band's best and most mature material to date. From the experimentation with witch-house on, "Awaken the Alchemist," the band has taken these new elements and mixed it in with their already enveloped influences to create a much easier listen on the ears.

The album starts with one of my favorite tracks, "So Lost." Before the album was released, but released the day after the preluding single, the song first appeared on July 23rd, 2013 through a free remix compilation COMA Music Magazine put out called, "Remix Assault: Second Clash," as remixed by band mate Wes' solo-project, reakt[ion]. So Lost is a perfect way to start out the sophomore album because it's a good representation of the old and mixing it with the new. It showcases the familiar sound [product] fans have grown to love - the combination of hardcore/ punk influences with industrial/ ebm influences - and adding that newly found passion for the experimental sounds of ambient/ witch-house - although it feels like the ebm part has dithered in the mix.

The second track, "the Blind," is a great instrumental. It starts off slow, and brooding - sounding like a song you could imagine hearing during videogame gameplay of some kind of sci-fi/ first person shooter. I really love the synth lead that gradually builds the song up even more at 1:07. If Michael ever wanted to write scores for videogames, this would be an ideal place to start.

"Amaranth," the third track off the record is harsh, the vocal delivery is sometimes delivered with a black metal approach, not to mention the lyrical content. That gritty, harsh vocal approach. It starts off with a cheesey (which is good in my book!) 80's synth-line then it just morphs into a witch-glitch monster.

"Call to the Moon," seems to be one of the biggest nods to witch-house, I really love this song and it's feel to it. It's probably one of the slowest songs Michael has released with [product] and because of that, it works so well. I can't recall if they've played this the numerous times I've seen them in the past two years, but this should definitely be a live track. It'd work well with their live show presense - which is always awesome!

The 5th track is a monster and is definitely a live staple. "Giving Water, Taking Ash," has that signature [product] sound with distorted vocals delivered in hardcore matter - and by that I mean hardXcore, not (happy) hardcore - with sound styles that are reminiscent of Tactical Sekt, [:SITD:], Suicide Commando, etc.

"Carrion (to the Stars)," could almost be considered an epic instrumental if it didn't have 44 seconds of vocals, but it's still an epic song - not that the vocals distract from the song, but having them come in two minutes into the song caught me a little off guard as I was grooving out to the rhythm. Maybe consider releasing an instrumental version of this track(?) I freakin' love the music content of this song. The build up, the slow ambiance in the background layers, the drum pattern with that arp-ed saw wave that was given a lot of distortion - where on the down pattern, it is synchronized with the drum which makes it sound like it is horizontally moving.

One of my other favorite new tracks would have to be the song with one of the best titles, "Voluntary Extinction," - so much power in that title. Another song that gets love in their live shows, and it's a quite deserving feat. Attack of the synths! I love the onslaught of spiraling synths delivered in the chorus which starts the song of vocally.

The next track features a special guest appearance by the Canadian Harsh EBM duo, Detroit Diesel - you definitely hear and feel the presence of more EBM with this track. "A Symbol for Water," ends up being the longest track on the album, just 14 seconds shy of 6 minutes. Definitely a stand out track on the album.

"Led to Light," is another live staple - being that the track is shorter than 3:30 it's really easy to put in live sets, especially if the band is supporting other acts and their set length is limited. This song has that signature [product] sound you've grown to love, just with better mastering - the album was mastered by reknown engineer Jan L. of X-Fusion Music Productions/ X-Fusion / Noisuf-X.

The music in "We All Live," is really appealing, as well as the lyrical content. It has rhythmic noise/ powernoise vibe reminiscent of W.A.S.T.E. Within the lyrics, Michael really has a way with words that comes out so visually descriptive, emotional, and full of power. Another one of my favorite tracks personally.

The last original track on the album, and the title track, "Shallow Graves," is a slow atmospheric track with a very melancholic feeling. Quite a dramatic way to end the album and transition into the remixes.

The first remix is from Canada's very well received act, iVardensphere whom take the beautiful instrumental, "the Blind," and turns it into a clubbier version that will surely be found on DJ's setlists around the globe. The harsh ebm/ experimental industrial remix from East German act W.A.S.T.E. is really good - it'll help DJ's who are fans of [product] that might want to slip one of their tracks into a harsher set, but aren't quite sure which track to use, this remix is a prime candidate. Being that the W.A.S.T.E. remix was exclusive (at the time) to pre-orders of the album only, I hope that at some point this track is utilized on a compilation of some sort so that more fans can here it - or make sure to get this remix to all DJ's who play similar music. The next two remixes that are paired with the albums promotional campaign are remixes from post-industrial Chicago based band Candle Nine and ambient/witch-house based Canadian act Apollyon's Visage are still uncirculated as the cassette pressing of the album still hasn't been received by the label from the manufacturer's - definitely look forward to that announcement because these remixes are really different from the rest, and lean more towards the witch-house genre that [product] has been flirting with.
# product
# industrial
# ebm
# ambient
# witch-house
# shallow-graves
# vendetta-music
# portland
# waste
# ivardensphere
# detroit-diesel
# candle-nine
# apollyonand039s-visage
May 05 2014
Ctrl Alt Del releases free album 'Dance Floors Destroyed'
Previous article
Freakangel announce new single, "Into the Fire."
Next article