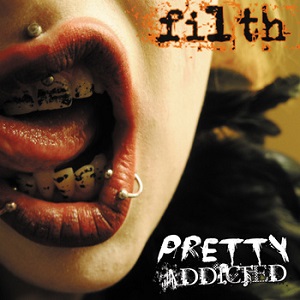 Spotify
Released 2013 by DWA
Dark Electro
"Filth is sexy to me, haha." is the answer I received when I asked Vicious Precious of Pretty Addicted of her distorted appearance during an interview a few days ago. With the debut album of her act being titled that of what she loves, Filth is an interesting concept from start to finish, and one that should actually make you question from the get go whether or not this album is worth it all or not.

Just looking at the track list should bring about a sense of disdain from more mature audiences; such tracks as I Would F**k Me, Slut Junkie, and PCP for the Crackheads should tell us that this is a project that cannot clearly be taken so well. However, Pretty Addicted aims to prove us all wrong, and they have just done that with me.

Each one of the fast paced and heavy hitting tracks are complete parodies on their titles, even if they use minimal lyrical content at points. It's hard not to be impressed with the debut album. As with most albums, it starts off with a little introductory note called, Precious. It's a noisy, ambient sounding track with a woman saying, almost calling out, "Precious" repeatedly. It's an ominous beast, to say the least, showcasing what's to come.

And what it foreshadows are a bunch of songs that are going to be praised in the coming sentences. Second track on the album, Slut Junkie, makes fairly good use regarding the sound of woman being sexually pleasured, along with a lot of bass and a moving rhythm that never ceases. What I really enjoyed in this song would be the middle of it, where it slows down and becomes a little less quiet. This section only serves as a build up to a very synth based progression, hitting you left and right.

We are then put into the deep bowels of I Would F**k Me. It's another fast paced and bass driven song that flows very well, and though it doesn't repeat the phrase, "Fuck me," quite too often, the quote does not get in the way of enjoying the song at all.

Back(stabbers) In The Twilight Zone was an amazing song. At first, we are delivered a quote from Disney's version of Alice in Wonderland from the Tea Party scene. After that, we are thrown down a rabbit hole and are put into the madness of a remixed version of the Twilight Zone's theme song. The song is filled with samples, and also a kick ass beat and anger filled vocals. It turns out to be fantastic.

Wasteman is a pretty harsh song in itself, the bass slamming into your skull and the vocals coping with the madness by being as intense as the beat is. Further in the song, it bounces back and forth between a quicker pace and a slower, but is still great.

Now, the next two tracks are my favorite on the album. Clown just begs to be loved from the get go; it begins off using quotes from Heath Ledger's unforgettable performance as the Joker in The Dark Knight. After that, the song's lyrical content is almost like it was built just for outcasts; it's a very self revealing title, bluntly telling the world that the artist is a freak, and if they don't enjoy it, they can fuck off. And I absolutely adored this song through and through.

Fetish Factory was another favorite of mine in the album. It takes a very trance like approach to the album. Building up to the two minute mark, the song remains fairly decent, but then goes into a very trance centric vibe, and gives the song a lighter beat than the rest of the album.

Now, Fear Myself rolls up next, once again offering a very dance-able beat, still being harsh. Although I don't have too much to say about this song, it was still awesome. After, we are hit with You Make Me Sick, which is another hard hitting song. My favorite part in this song, however, comes along when about halfway through the song, it slows down. However, once more, after a few threatening lines, the build up continues, and we are hit with another hard beat. As menacing as the lyrical content is, the vocals bring out the emotion, and the beat plays very nicely next to it.

And, I suppose now would be a good time to state that perhaps one of my favorite aspects about this album is purely the fact that the beats never slow, they never stop, and they are always pounding you in your worthless ear canals, and Lipstick Mess continues that trend. It doesn't give up keeps it going no matter what.

Beauty In The Chaos - Extended (Per)Version is a faster, not the harshest, song on the album. This is one that can definitely get the floors moving in clubs. And, finally, we come to an end of the album with PCP for the Crackheads. Knowing that Pretty Addicted calls their fans the Crackheads, this is a love song to all of us (awwww, how cute.) No, I'm not sure the intention of the song, really, however, that doesn't mean it isn't good. In fact, just like the rest of the album, it's pretty damned good, and I am so glad I was able to listen to this song as well as the rest of the album.

But, that's just the end of the original tracks. Packed onto this album are also three remixes. The Grendel remix of I Would F**k Me adds a nice spin to it, focusing a lot more on synthetic piano work, but still slamming us into the foray. Die Sektor's mix of You Make Me Sick (the remix simply being titled Sick) uses their trademark of heavy, distorted vocals with extreme beats and turns out excellent. And, the last mix on the album would be from Modulate, who remixed Beauty in the Chaos. My favorite bits of this remix come from when it breaks down and makes heavy use of the synths.

NOW, though, I am truly done with the album. And I am simply ecstatic and very pleased with listening to it. It's like a good orgasm; you worked it up, and then it happens, and after that, you just can't wait for the next time you're able to pull one off. That's exactly how I feel about this album. It was a great joy ride, and I really wanna see what Pretty Addicted will come up with next. Precious has made me agree with her statement; Filth is beautiful. It's sexy. It's gorgeous. It's mesmerizing. It's grand, and I can't wait to be poisoned with this dirt again.
# dwa
# filth
# pretty-addicted
# england
Oct 05 2013
DWA releases MASSIVE 10 CD box
Previous article
Music video for "Wanting Is Not Enough" by Miss FD
Next article

DWA
The Cure - The Top is available at POPONAUT from 9,95€

Pretty Addicted - 'It All Stems From Childhood'