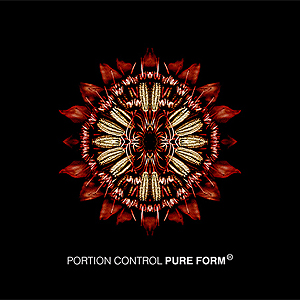 Spotify
Released 2012 by Other Sounds
Electronics, Industrial
Violently Alive was the shiny, seamless exterior... now we have the concrete and steel which comprises the rest of the structure. No matter what I'm listening to, when this band put something new out, it completely takes over my thought process. I spend so much time pushing at discovering the limits of musical expression that it takes an act like Portion Control to pull me back down to the ground. If more musicians out there were as serious about what they do I would appreciate it beyond what mere words can express. The solid, flawless logic of their work is without question the best of the best you can ever hope to hear these days; I know it'd be easy to fall back upon their longevity as the reason for why they are so accomplished at what they do but they don't take the easy route and neither will I. If you are looking for a challenging album to better your powers of discernment with, you can do no finer than Pure Form. Precision, integrity, power and wicked panache all meet together under the heading of this release.

Since their return in 2004 with Well-Come, I have followed them both on album and through the press consistently. I've had discussions with previous editors about their merits and if they truly are as good as I continually insist. If their legacy is only to be what they've done in the last eight years then they still will come out at the head of the pack. Their instinctual ability to bring out both abrasion and refined, elegant melodies is second to none, one of the songs on here finishes with what sounds like a film reel running out and then the next track comes together out of minimal noises which then focus like insidious razor sharp teeth and become the malevolent floor crusher Point Blank. You'll feel like you've just gotten a face full of buckshot indeed when you hear it. Hit me with everything you got, Dean Piavanni growls while John Whybrew's big beats and jackhammering effects kick you in the teeth. Try to pause for breath.. there's no chance as that looping bass line jumps in and out of the forefront with, pardon the expression, pure menace.

Wide eyed and white knuckled, you who are fiending for your copy, prepare. Your faith and devotion will be rewarded shortly twenty times over because for all the albums and songs they've defined entire genres and band's careers with, Pure Menace is comprised of two main halves. They are not linearly placed but it's quite obvious that Portion Control are going to sound very different when they release their next long player. There are the gut punchers that'll knock the wind out of you don't worry, but there is also an extremely alien set of tracks on Pure Form which most will compare to Well-Come but I'm getting more of a Solar Enemy feel out of them. Terex Pure or Chosen Seed are good examples of this, and though I may be off base with my suspicions, if Whybrew and Piavanni are going to investigate that maddeningly riveting path they trod back in the 90s I am all for it. Their short lived project is not given much recognition by the theorists which the underground is now rife with but I championed Solar Enemy then and I'll continue to advocate for them now.

A no bullshit record is what we've got on our hands here; a restless pair who continually evolve by leaps and bounds each time they check back in with us. Show me another pair of fifty-somethings who put as much into what they do as these guys, go ahead and try. These fellows are in the midst of delivering a synthetic renaissance and once more, few if any are even bothering to give a cursory glance in their direction. There can be no doubt that Portion Control are earnest about what they do, there is no way an act can go over thirty years and not stand behind their ethos. I predict that once they're gone again, these same callous fools who name drop them will be the first demanding that our heroes return.

I could swear there's a touch of Psycho Bod on the song Slow Release! The truncated drum rolls are a brilliant touch and give the rolling rhythm a livid, shivering presence which shoves you out of the way brusquely.

There is also a humorous element to Pure Form that briefly is exposed via Something Fierce. A broken set of percussive accoutrements that serves as a nice middle finger towards the proposed drag and witch house movements. As if all those soundtracks in the 80s weren't bad enough, now there is an entire bunch of individuals who mine those piss poor aesthetics in place of any original form of expression. Here's a rusted wad of barbed wire to choke down, ladies.

Dean does what I consider his best vocal performance yet with his contribution to Katsu. He sneers, he snarls and he leaves McCarthy eating metal shavings off the assembly room floor. Whybrew's the guy who really runs amok, however. For as many times as people rant and rave about the lack of complexity in music or the sheer demo quality most bands happily embrace, this guy is an absolute perfectionist. To have the skill to compose a song such as In Dark Places is something I really really doubt this bunch of kids who parade around in a cloud of vacuous internet celebrity could pull off. I'm sure people will debate this and consider me out of touch which is fine, Portion Control make almost everyone else out there irrelevant and if they wanted to finish with an album like Pure Form no one could ever fault them. For the love of god, will you idiots sit up and pay attention to what they're doing, just put the twitter down and step away from your forums. History is being made here. Apr 20 2012
Spektralized - 'My Needs'
Previous article
Delica-M - 'Hyperstimulus'
Next article

We don't have any stores registered for this release. Click here to search on Google
Portion Control - I Staggered Mentally is available at POPONAUT from 18,95€

Grundik+Slava - '...For Electronics and Birds'