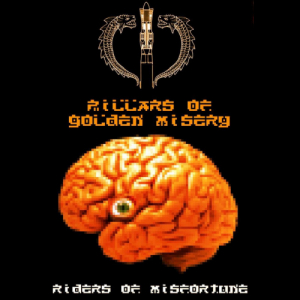 4.5
"Bad"
Released 2021 by Culture Vomit
Industrial, Noise
Pillars of Golden Misery is a project fronted by Howard Gardner, specializing in dark noise-scapes influenced by soundtracks and 8-bit retro goodness. The project is relatively new with their first release on Bandcamp being an EP titled "Golden Hand of the Leech". The four track album was released in both digital and CD digipack to little online fanfare, but that cannot stop an artist. Their second release was a live performance recorded at the Astral Electricity Squad 2 event in Iklectik, London. A rawness was present to the experimental release attributed to it being, well, a live recording. Another live recording session from the same event was released at the same time. Howard Gardner, Dominic Hemy, and Lydia Kavina all participated in an improvised session at the show. What was created is a twenty-plus minute compilation of eerie synthetic, space-like sounds. December 1st, 2019 saw the release of the bands follow-up EP "The Shroud", which is a four track experimental piece. The project garnered enough attention in the experimental / noise scene to attract record label Culture Vomit and here we are with their newest release "Riders Of Misfortune".

The cover art is actually quite appealing to me. The 8-bit, retro aesthetic comes full force as the title of the album and project both appear in pixelated text. There's a brain in between the two text blurbs also in pixelated presentation with what seems to be an eyeball or hole of some sort right in the center. Above all of this is what I assume to be the band's logo which, again, is pretty cool looking and would serve well on a T-shirt. This is all presented on a clean, black background. From an artistic viewpoint, this is well done. But, as I like to state in every review, the cover art does not effect the review score in any way; it's just fun for me to explore.

When it comes to experimental and noise music, I like to group the music into three separate categories as this is something I have come accustomed to with these releases. There are the songs that are enjoyable; behind all the wonkiness and odd blips and bloops, there is something pleasing. There are the listenable, or songs that aren't terrible or great, but kind of sit in the middle and could be used as little more than background noise while doing mundane tasks. Then there are the terrible songs, or songs that make me want to take my headphones off and throw them across the room. I shall start with what I consider to be the only enjoyable song on the album.

'Disheartening 3D Zombies' is an extremely ominous song focusing on dark ambient mechanics and layers of electronics to deliver what can only be described as an aural hellscape. The noise featured in the song, alongside the steady tribal percussion, is a wonderful bout of noise, musical commitment, and disturbing atmosphere. What I could have only wished for out of this song was more deviation than the standard cinematic sound found within and a bit more of a boom from the percussion. If the drums matched the dark energy given off by the synthetic sound than I would have been granted an engaging and powerful song for years to come. As it stands, however, 'Disheartening 3D Zombies' is a good work from Pillars Of Golden Misery.


I found three of the songs on the album to be listenable, then. Starting with 'Exquisite Crystal of the Dead', it is another piece focused on experimental electronics and dark ambiance. There's a bird chirp like sound that comes out to play every once in a while but whereas 'Disheartening 3D Zombies' was extremely engaging in its sound design, this one I found to be a pretty relaxed listen without much to have my mind to. 'Riders Of Misfortune' was a static noise experience that shared similarities with many other noise / experimental albums that I've received as submissions on the site before. I had similar words about 'Shadow of The Snake Hell'; glitchy electronics and an overall rumbling, lo-fi tone took course for most of the song, but it wasn't anything that I was wanting to return to. When it came on, I accepted it, but I forgot that the sound was even there at some points.

And then we come to the terrible. 'Brain Enemy' is an ambient noise track that is just so similar, so redundant in its nature in comparison to other bands that I couldn't find reason to listen to it more than twice for this review. The electronic, messy noises sounding like the echoes from a forgotten lab weren't easy to listen to, either. They were a hindrance to my experience. 'Shuriken Worm Murderer' seemed to have a beat going on underneath all the noise, but it was rendered incompetent due to a giant noise wall that flooded out all other sound. 'Viscious Call Centre Universe' was, again, just a familiar experience I've had one too many times with multiple other noise projects. 'Remorse Surfer' sounded like old telephone calls where you couldn't connect to the other line, and you received that really awful, high pitched tone in your ear. Lastly, 'GoGo Battleship Gone Wild' seems as if it were purposefully made to destroy someone's ear drum upon hitting the play button. The sound is amplified compared to the rest of the album and the sounds even more grinding than before.

Pillars of Golden Misery is in its early years and has a good groundwork for their music in some cases. The listenable songs are passable, and 'Disheartening 3D Zombies' makes for a spooky and ominous track. But where PoGM is currently struggling is to find an identity amongst a sea of noise makers. A lot of the songs that I heard on here can be thrown in a noise playlist and not picked out from a bunch of other experimental songs. That and, though it is a noise album, there should never be sounds on an album that are demanding a listener to destroy their speakers or headphones.

PoGM cites Coil and Lustmord as some of their influences. What I think they should do is take their dark ambient, noise, and soundtrack influences and try to create a cohesive piece of music that can be listened to through and through - just like Coil and Lustmord were able to do. They have the talent for sure as seen on 'Disheartening 3D Zombies', they just need to tap into it more often.

This review was commissioned through our Ko-fi page. Feel free to check it out for review, interview, and premiere opportunities.

Bandcamp
Scotch - Pictures Of Old Days is available at POPONAUT from 16,45€