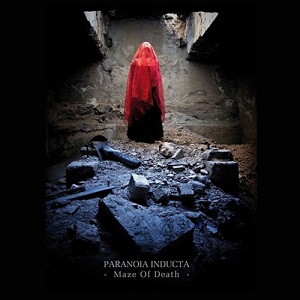 9.5
"Amazing"
Released 2013 by Old Temple
Death Industrial, Dark Ambient
Though many may complain about it, evolution from an artist is what makes their talent grow and expand as their musical career continues on and on throughout the years, coming forth with such ferocity and melodies that can only be put to work through instrumentation. While this sort of evolution takes many years to come to, some trying to stay with a similar style, others completely re-imagining their sounds, it's an absolutely beautiful sight to see when a performer moves on from the old to the new. What's really astounding, however, is to see that same sort of evolution displayed in just a fifty minute presentation. Ladies and gentlemen, that's exactly what I've found in Paranoia Inducta's Maze of Death.

Delivered sentience in April of 2003 by soloist Anthony Armageddon Destroyer, the act pertains to death industrial and the dark ambient genre, though he pulls motivation and vision from other kinds such as the classically used industrial and noise. He's even coined himself a unique title amongst the sea to distinguish himself from odds and ends, chronicling himself as apocalyptic death industrial. Looking to pair the electronic and sacred sound to the modern world and it's leading technology, soon to its impending destruction, inhumanity, coldness, filth, and pure evil are the prime idiosyncrasies driving this performance.

Though the previous words allure such a frightening scene, compared to what is lead to the fray as the first song, complete artistry and charm is instead imported through in Angels Whispers. Fantastic piano work mates with noise below the surface, delivering an apocalyptic sound of searching through war torn rubble. The drone like noises in the back make for an unreal sense of belonging. The captivating humming only beckons you forth into this maze, to discover and become lost in.

By the time the title track and following song come in, Maze of Death has already settled its grips on you, and there is no escaping from it. You're sucked in, like a mythological Siren would do to so many sailors. Only, this time around, you're diving in completely, and drowning within the nurturing sounds the album has to offer. Classical tunes blend in with more choral samples. Slight effects like faded whispers in the wind blow against your ear, a destructive force just waiting below the chords for its time to strike.

As I'm slowly guided into Prozac Nation, more choral samples bless my ear and the dark ambient sounds fluttered about with xyophone effects do just fine. Like an Angel playing his music after a bomb drops on an innocent crowd, the sympathy you feel in this song is something uncanny; you don't understand why you're perceiving such an array of emotions, the music is so dominant you can't help but get caught adrift. This song is also where the evolution begins; more of a military-esque sound approaches with bells and other instrumentation and a deeper sense of war hungry spirits. It doesn't last too long, though, and eventually shifts back to a soft tone.

Burning Shadows replicates that of a campfire, though the music does not speak of that of friendliness. The accent declares something forbidden, something that happened that no one wants to communicate out loud. The chanting that occurs, more like disturbed breathing and panting, impacts against the piano work, and all the other sounds just completely benefit from the main focus.

Before long, Maze of Death gives us a taste of its corruption with Dark Messiah. Evil words spoken from an unholy mouth tempts all sorts of demons to come forth and rise; the resonance of the song almost playing out like a war-speech; a vociferous speech trying to hype troops to act without thinking. Slight death industrial tones are played out in this one, matching the grand scheme.

The Kingdom of Pain put out more of a martial industrial feel with the war drums playing along, the screams and tortures making this one enjoyable Underworld to walk through. Short and sweet, but long enough to make it durable, this one came in and came out like a bat out of Hell. Kill Me Once Again almost sounded like a partner song to the previous, sounding more atmospheric and Holy than the previous, the singing sounding like a chorus of lightened spirits praying for the aid of their lord against whatever nefarious creatures they may come across.

Circle of Despair brought along with it some of the best drum work seen on the album thus far. Really pushing and driving, calmer once more rather than malicious sounding, the chaos died down for a bit allowing more of a ritualistic experience to dance with the rest.

Through the whispers and xylophone effects, the deep pitched voice sounding like a wise beast from afar, and an echo to bring it all together, Eternal Fear sounded as if it was performed in a vast cave by someone who was alone and looking for peace. The final bits of the song sounded odd, a few bits off random electronic sounds thrown in for good measure.

Water trickled next in Abandoned Paradise, as if the cave branched out into a giant stream with a marvelous site to behold. More echoes kept us inside the cave, however, so I could only imagine myself surrounded by the most precious of stones, the cleanest of water, alas, I was midst foreign sounds, so a sense of bewilderment crawled up my spine. As the song progressed, a bell was added in, more choral effects, and a deep atmospheric presence to add onto an already graceful track.

As time went on, Digital Coma brought me into a silenced era. Perhaps one of the only purest to form drone tracks on the album, the notes were long winded but amazing, the effects driving them forward and presenting only more Heaven than what was already presented.

I'm Just Your Remorse is the last and final song, presenting along a few odd noises along some final notes of piano work. A dark ambient vibe is placed underneath it all to make for a final, lovely piece to send us on our way. Glory to this album.

Whenever I give out such a high score, I always make sure the album that I'm giving the high score to deserves such praise as others I've given the score out to. And this album has me fully appreciating every second of it. Every sound, every noise, every song that played through I was able to enjoy to an extent that I haven't felt in quite a while since the beginning of the year. Simply astounding, beautifully done with a dark passion, I have found a new album to fall in love with over and over again.

As I said earlier, this artist managed to evolve his sound in a mere fifty minutes. From one moment, his work is absolutely Heavenly, it's gorgeous, it's the pinnacle of artistry in music form. Take a few songs, and the work transcends into darker territory. A vitriolic Hell-hold of worn men, destroyed souls, and cataclysmic chaotic delineation. And, finally, a more neutral, natural soundscape presents itself before letting you go on to interpret the album as you would on your own. Listen to this album through and through, again and again; you will not be disappointed. A merging of the Holy and the Unholy drifted into my hands, and from it this beautiful child was born. Maze of Death offered me more life in a single hour than most events of my 20 years of age. Go listen to it.
# paranoia-inducta
# maze-of-death
# old-temple
# death-industrial
# drone
# dark-ambient
Jul 15 2014
Halo Manash - 'Caickuwi Cauwas Walkeus'
Previous article
AL_X - 'Shunt'
Next article

Cold Spring (Physical)
God Module - The Unsound is available at POPONAUT from 13,45€

Paranoia Inducta - 'From the Depths'