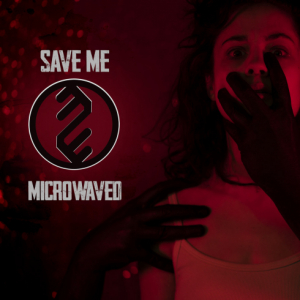 6.0
"Alright"
Released off label 2021
Industrial
Industrial project Microwaved is the solo outlet for Gabe Wilkinson. Started when he was playing in metal projects as a keyboardist and sampler, it allowed Wilkinson to explore his own personal audio output. Wilkinson has been playing live shows, writing music, writing for music magazines and the such since the 90s and has played with the likes of Slipknot, Mudvayne, Combichrist, Hate Dept., Sister Machine Gun, Cattle Decapitation, System of a Down and countless others. His output is immense and it is impossible to cover it all in this simple intro paragraph, but more of his music is available for streaming and purchasing over on Bandcamp.

Microwaved's latest output, then, is a fourteen track album containing three original songs and a ton of remixes from the likes of I Ya Toyah, SPANKTHENUN, Batavia, and more.

The first song to appear on 'Save Me' is the title track and, to be blunt, I was not a fan of this one. This is in no part the guest vocalist's fault; Kimberly of Bow Ever Down does a tremendous job with her voice throughout the song. It's beautiful and alluring. The problem mainly lies within the music; while the vocals sound clean, concise, and precise, the music sounds rather demo-like. The guitar is a bit too repetitive for my tastes, and the beat of the song sounds as if someone is rapidly tapping the tip of a microphone with their fingers. It is rather annoying.

The second track on the album, 'You Know That I Love You' features Nathan Charlson of milkfixer. Doom and gloom is the name of the game with this song, featuring guitar that is deep and woeful. The synths are equally pressurizing, though I preferred them in longform rather than being sputtered out during the chorus. The drum work ticks the right boxes as well, menacingly crawling with the pace of the song. Charlson is able to match the grim tone 'You Know That I Love You' is aiming for, both with weary chords, whispering, and a bit of growling. My only complaint for this song remains the same for the above track; it doesn't sound completely mixed or mastered and comes out rather demo-sounding.

The final original song on "Save Me" is 'Scream for Something' featuring Mitch Doucette of Doomslayer. Doucette has vocals that would pair well in darkwave or post-punk music, but I feel as if his singing gets lost in the mix more often than not thanks to the beat overpowering his voice. I also feel as if the way Doucette sings on this song is out of line with the frenetic pace of the beat. I've mentioned this in the past in previous reviews, but it goes back to the beat attempting to do one thing while the vocalist is trying another, without either ever really pairing well with one another. Doucette's voice is not bad, however; it's quite good and I'm quite interested in checking out his music now. But, again, I feel as if the music is underwhelming coming over with that demo-like sound.

After these three songs there are eleven remixes in total. The first of which that jumped out at me is a neoclassical version of 'Save Me' from pilgrimOmega. I feel as if this is how the song should have originally sounded; the music (pianos and other classical instruments) goes well with Kimberly's voice and it's a very well done track. Steven Olaf also remixes 'Save Me' and gives it a wonderful electro-industrial makeover. Everything has been torn apart and revamped, giving the track a wonderful coat of paint.

One of my favorite modern industrial acts, I Ya Toyah, takes on 'You Know That I Love You'. The grim, doom and gloom is gone and is replaced by a fantastic industrial dance beat. For the most part, the vocals are edited into harsher whispers or dual vocals such as around the two-minute and thirty-three second mark. I also loved the remix met3mpsyk6sis did for the song. Rather than playing against the sordid landscape Microwaved initially envisioned for the song, met3mpsyk6sis plays into it. Synthetics takeover the track for the most part with a rumbling bassline. The vocals are transformed to sound as if a robot is singing. I got the chills when listening to this one. SPANKTHENUN, another project at the forefront of industrial remixes, took the track and made it a slow-paced but stompy EBM track.

Those five remixes listed above were my personal favorites, but the other featured on the album do a phenomenal job with what they were given. Batavia, AudioBuddha, milkfixer, 46 Year Old Virgin, hEADaCHE, Raygun Girls; you all deserve a round of applause. The Bandcamp version of the album also comes with a cover of Pink Floyd's 'Comfortably Numb' in collaboration with LIEBCHEN, as well as another remix from Steven Olaf (definitely worth checking out).

At the end of the day, however, the most disappointing part about "Save Me" is the fact that it is not Microwaved's original songs that I'll be coming back to the EP for, but the remixes. There's an immediate difference in quality when jumping from the original songs to the remixes, the starkest differences coming from the previously mentioned pilgrimOmega, Steven Olaf, I Ya Toyah, met3mpsyk6sis, and SPANKTHENUN. Again, 'Save Me', 'You Know That I Love You', and 'Scream for Something' all sound like they're incomplete, as if they're missing a proper mixing or mastering. If Microwaved can get the production of their music to a higher level, then I think that problem would be solved.

However, I am also not going to say that this is an album that should be written off. Again, the remixes alone are more than welcome additions to my playlists and I've been dancing in my car to a bunch of them over the past week. For all that said, then, I give "Save Me" a six out of ten.

This review was commissioned through our Ko-fi page.

Bandcamp
Wavefall - Huge Frustration is available at POPONAUT from 5,95€

Microwaved - 'At The Heart of Death'