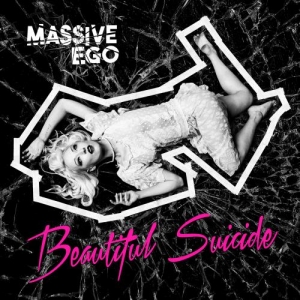 Massive Ego's Noise in the Machine EP released back in 2015 as a teaser of what was to come. The leading single 'I Idolize You' has went on to hit a little over one-hundred and seventy-five-thousand views on YouTube. Even though the band has been around since the early nineties Massive Ego had not reached this level of recognition or popularity up until the past couple of years. The industrial-pop sound that echoed off of Noise in the Machine led to heaps of praise being pushed unto Massive Ego, including from our own webzine where I stated that, "I was just floored by the sound and quality that erupted from this 80s pop inspired industrial fusion." I've been eagerly anticipating a full length release from this band ever since and finally that time has come.

The wait has not been for nothing, however, as Massive Ego's brand new album Beautiful Silence has enough content for two discs worth of material. Collaborations, guest appearances, remixes, and a chock full of original material easily kept me occupied for hours as I listened to Beautiful Silence over and over and over again. The cover art for the album was quite inviting as well as the woman caressing the glass  below looks like she belongs in a film noir; was this really a suicide or was this a set-up?

As it is Beautiful Silence begins off with a cinematic-ambient track 'Ghost In My Dream' that's haunted by Marc's dragging chords. This doesn't last too long as 'Low Life' kicks in with the industrial-pop aesthetic that Massive Ego has so eagerly embraced. The dark and gothic chords of Marc are met by guest singer Maggie K De Monde of the project Scarlet Fantastic. Her operatic voice is gorgeous against the darker and harsher elements of 'Low Life'.

Marc sees a return to his deep pitched chords that were present on 'I Idolize You'. The beat keeps a solid dance aura about it while samples of moaning backs the song. 'The Girl Who Finds Gifts' saw Massive Ego slow down the usual pulsating beats with electro lines trickling through the song with big beats. Dance synths break the barrier as well and gives the song an extra edge. 'Kate's In A State' is a very smooth electropop song that has dancefloor appeal written all over it. 'Let Go' continues the electropop sensation and includes Heavenly sounding synths as well as the masterful Massive Ego touch.

Although I absolutely hated the title of the next track as it's such a standard phrase I can't help but praise the track either way. 'Hates Gonna Hate' has a very stompy, almost military-like beat about it. This is a track circling all around standing up for yourself and not giving a shit what others think. The song also featured Gothic-rapper Belzebub. Though I did find the genre "gothic-rapper" distressing, the dude actually has a pretty damned good rhythm. Plus, he seemingly avoids the modern day thug-like approach to rap so that's always a plus. Good on him.

'For The Blood In Your Veins' features none other than the legendary Chris Pohl of Blutengel, Terminal Choice, and all those other lovely German-industrial/electro bands we all know and love. The dual vocals are always nice from both of them, but this track takes a bit of an electrorock spin as guitars play throughout the songs duration aside the electropop beats.

Up next came my (still) favorite track on the album 'I Idolize'. I can't tell you how many times I've sung this on car trips and the like, but I absolutely adore it. It's got big beats, catchy lyrics, and is accompanied by an awesome fucking music video. Do check this song out if you haven't listened to it yet.


Futurepop musician Gene Serene came along on the track 'Out of Line'. She was able to provide her gorgeous vocals to the fold and sing right alongside Marc. The more emotional track made it appear as if the two were either speaking to each other or arguing to their heart's content, saying what two lover's at war are thinking but refuse to say to one another.

Perhaps one of the more minimal tracks on the album 'Coldest Light Of Day' dragged me in with slow pounding big beats and driving synths. 'Where I Find Myself' was a straight moving electropop song accompanied by some gritty guitar work. 'Drag Me In, Drag Me Under' made me want to get back on a dancefloor to move and groove even though I can't dance for shit. The second to last song on the first disc turned out to be the title track 'Beautiful Suicide' and this is where the synths stood out more than anything before. It was bliss. The final track that led me off the album was a very well done orchestral version of 'I Idolize You' stripped of the vocals. But that's not where the fun ends; there was also a disc two.

'Public Disorder' starts off the album and serves as a fairly correct understanding of the world right now; chaos, public marches, military drumlines; it's all there. It seemingly transitions into the next song 'Rise' which is a fun little track though it does sound unpolished in comparison to the rest of the tracks. 'Dead Silence Rising' originally appeared on Noise in the Machine and still has the same jumpy beat. 'Goodbye London' has a synthpop essence about it and was absolutely enjoyable. Lastly, 'Eighth Day' was an oddity out of the bunch with a small electropop beat behind it, though blasts of guitars and synths join the song during the chorus.

And as with any massive 2CD release there is also a remix section including Blutengel, Ashbury Heights, CHROM, Ludovico Technique, Nature of Wires, Ash Code, and NeroArgento. However, I will give a special mention to Nature of Wires for providing the best of the remixes. Their turn on it gave it an extra depth and a solid drive, so kudos to them.

With Beautiful Silence Massive Ego has given us nothing short of a gargantuan release packed with a ton of material and talent far beyond what I expected. Included in with a couple of previously heard hits are amazing collaborations and original songs alike. Their brand of industrial-pop is well done, mixed, and produced and the wait was well worth it. Two thumbs up for Massive Ego!

Out of Line Shop
Massive Ego - Beautiful Suicide is available at POPONAUT from 14,95€

Massive Ego - 'Noise in the Machine'