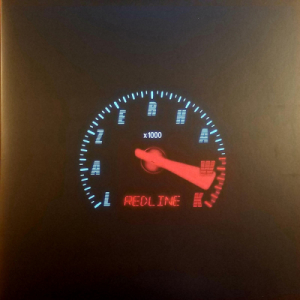 10
"Legendary"
Released 2020 by Electric Dream Records
Retrowave, Synthwave
Wow! Where the hell do you start with a review that contains music released back in 2010? I guess I could start by asking the pertinent yet rhetorical question: Why? Why did it take 10 years to release Lazerhawks's Redline masterpiece on a physical format? How is that possible in a world of labels trying to establish themselves in the demanding physical media world? I don't claim to know anything about the details to how Electric Dream Records (EDR) scored the deal to release Redline on vinyl. It just seems like there had to be some pylons in the way of this happening years earlier. Garrett Hays AKA Lazerhawk is the founder of Rosso Corsa Records. Many are familiar with this label and it seemed like a perfect place to start with a cassette release at the very least? What do I know? So many questions surrounding why it took so long to get a proper release are left unanswered. When EDR put up the pre-orders the records sold out quick. I think if this happened five to six years ago the result would have been the same. Again, I wonder why this took so long?

The retro scene was growing with labels like Rosso Corsa, Werkstatt and Telefuture to name a few. Artists like the aforementioned Lazerhawk as well as FM Attack, Protector 101, Pertubator, and Makeup And Vanity Set helped set the stage for where we are now. Today there are so many labels out there dedicated to the varying genres that seem to all be lumped together to form synthwave. It's pretty easy to name some talented artists out there that have released some incredible LPs. It's also easy to name some artists out there that have physical releases that may have you scratching your head as to why was this released on lavish vinyl and Lazerhawk is still digital only. To each their own. Obviously based on my scoring of this album you know I hold Redline in the highest regards. It expanded my tastes in music and opened my horizons to explore further retrowave offshoots. If not for Lazerhawk, who knows, perhaps the genre would have eluded my radar long enough to miss out on some killer first editions by the luminaries of the genre?

I remember hearing the track "Electric Groove" about 10 years ago. I was always into vocals going back to the 80's listening punk, post punk, hardcore, new wave, etc. Imagine listening to MDC or Dead Kennedys as an instrumental only band.  Weird right? Needless to say, "Electric Groove" grabbed me musically and lyrically. It was so easy to lose myself in the music's trance. The lyrics resonated with me in such a way by bringing me to places I had long since covered my tracks from. It was a time of reflection that never got old. I played the song so many times as it was the perfect blend of 80's revelry, music and vocals that to this day stands as the bar I set for perfect songs. There are not many songs inhabiting this realm. The punching basslines and magnificent leads surrounded by the intoxicating sound layers set the standard for what Lazerhawk is known for. Flawless execution both musically and vocally. The vocals blend a human approach with clean melodies and choruses and they are complimented by filtered robotic segments as well. The robotic vocal style can also be found on the tracks "Dream Machine" and "Pedal To The Medal". When paired with the amazing song design, the music and vocals work together in such a way to pull the listener's attention deep within the fabric of Lazerhawk's world.


To me Redline is the perfect album to lose yourself in. "Redline" and "Overdrive" allows me to forget that I'm actually driving a Honda Civic. By the time I get towards the end of the album with "So Close", "Space Trash" and "Activation", it becomes time for the reality of not really driving a Lamborghini to set in. I get back into a 2012 Honda Civic with some dog fur and assorted paper littering the floor. The dream ride concludes. The beauty of music is that it moves people in different ways. Since we are now one year into the global pandemic and I rarely leave home, but when I do, and feel like going for a long ride, rest assured Redline will be played at some point.


Another reason to love Redline besides the amazing sound is the way Lazerhawk's song order works so well with a racing / driving theme to the album. The vocal tracks are spaced out enough that the vocal dynamic is never over played. After "Pedal To The Medal", "Interstellar" expands the sound to a more open and dreamy area, the same way "Distress Signal" did after "Electric Groove". "So Close", "Space Trash" and "Activation" round out the album with a hypnotic dose of retro vibes to take you into the home stretch. These tracks are just as important to the big picture as any of the other tracks. "So Close" keeps it 80's all the way. The synth sound will remind you of many 80's hits while "Space Trash" strikes similarities to the earlier tracks like "Redline", "Overdrive" and "Electric Groove". I almost expected another vocal track here, and we did a get a few robotics lines chanting "Space Trash". "Activation" closes it out with one last burst of speed and power to complete the drive. Sometimes we get seduced by a few songs and forget about the rest. For some artists that's fine. They don't have enough in the tank to give you a reason to explore every track. To overlook any track on Redline would be a great disservice to your ears and perhaps an insult to the artist and the diehard fans.

The double vinyl comes in three different color variations. Black, Red and Blue, and Red and Blue with black smoke which are all housed in a glossy gatefold with nifty car graphics. Even though this is sold out, I feel it is an essential album in any collection. For now the digital will have to suffice unless you're willing toss a bill or two at a salivating Discogger. Lazerhawk has another vinyl release for their latest album from 2017 Dreamrider which is sold out already on EDR. I do hold all Lazerhawk in high regards, but nothing comes close to the magic of Redline in my opinion. Lazerhawk has a few more albums that EDR could release. Watch close or lose out.

Bandcamp
Avarice In Audio - No Punishment : No Paradise is available at POPONAUT from 13,95€

The Silicon Scientist - 'Windows On The World'

Halgrath - 'The Whole Path of War and Acceptance'