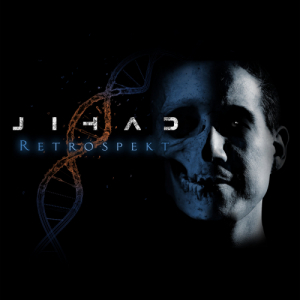 8.5
"Great"
N/A
Electroracle
Released off label 2020
EBM, Industrial
It has been a long time since Jihad released A Prayer In The Night. In fact it has been twenty-three years. Yes, Jihad released a live album five years ago, but to have twenty-three years between your debut and your sophomore release is a huge gap. It's a generation. What happened twenty-three years ago?  Well, Princess Diana was still alive for part of 1997. 1997 gave us the Heaven's Gate mass suicide, Tony Blair becomes Prime Minister of the UK, Mother Theresa dies, Mike Tyson eats Evander Holyfield's ear, OJ Simpson is found guilty in his civil trial, Abner Louima is brutally assaulted, BIG is murdered, Mariah Carey and Chumbawamba topped the charts. Also, you could actually enjoy a live performance from your favorite band or artist without seeing it through the asshole's phone standing in front of you.

Jihad found their way through the ashes of Benestrophe, as the Dassing brothers went on to form Mentallo & The Fixer. Richard and James Mendez scored a successful contribution to 1995's 4CD benchmark compilation There is No Time (RAS DVA).  Jihad cemented their legacy with 1997's A Prayer In The Night, also with RAS DVA. Time passed and Jihad members went their own ways as priorities shifted. The band showed signs of life after being recruited by Electro Aggression Records to participate in another 4CD compilation called Old School Electrology Volume One in 2011. Like with There Is No Time, Old School Electrology Volume One would surround Jihad with many of the best in the business. Jihad's offering, "Seven Skies", revealed a new vibe for the band with James responsible for both the music and the vocals. This track was much more melodic than anything previously released. It was not much to go on but it was a little treat for old schoolers that felt cheated with only one Jihad album. Several years went by and James started playing shows all over. In 2015 Jihad played the Dark EBM Souls Festival in Bratislava. The performance was recorded and later captured on CD commemorating the performance. After catching him live in Baltimore several years back, I was quite surprised how he was able to reinvent his sound just enough to retain many of the aspects that made Jihad so captivating years ago without losing his identity, even now as a solo project. The vocals sounded like Jihad even if it was James's voice instead of Richard's. This was a good sign.


Twenty-three years later Retrospekt is finally unveiled to old school rivet heads and their offspring. Musically everything is there that you would expect from Jihad. From the programming and sound layering to the vocal execution, the songs continually reward the listener. I found myself in some offshoot of suspended animation or something. As I was listening I thought only ten minutes had passed when in reality I was completely lost in the music for a half-hour. It's very easy to lose yourself in the moments as the music attaches itself to every last sensory mechanism the body has to explore the amazing creations within Retrospekt. The flow of the tracks, the style and the vibe all make this very easy to listen to all the way through. Personally, I can't say one song dominates all others. Each track is intense and delicately vicious. It's like hailing a cab and taking a dark ride into the abyss. This intensity sneaks up like an unsuspecting toxin released into the bloodstream doing it's work without being noticed by the host organism. Before you know it, the damage is done. Obviously this is good damage.

Lyrically, the themes range from personal self reflection, pondering the afterlife, religion and perhaps existentialism. The title song is the final track on the album. Lyrically it may hold the answers to what brought Jihad back. For those familiar with Jihad, several lines seem to be very specifically worded and left open just enough to possibly make light of significant events over the last two plus decades. I have my theories, but I will keep them to myself. "Origins" is the only track without lyrics and it got me to really think about how well the sound is designed and executed. I could easily listen to this entire album as an instrumental even though I love the vocal element; the music stands out in a way where you have to sit back and give props where props are due. As for the vocals, James did a masterful job in how the vocals fit into each track. This could have easily been a nightmare if the vocals were too loud or too harsh. The harmony of individual parts would have bled out the whole. The final product is nothing short of awesome.

"(I Can't) Let Go" is the first track of Retrospekt. This is not the first time it has been released. A live version is on Dark EBM Souls Live in Bratislava CD. That song has been around a while. The studio version debuts here. Our expectations are shattered and reset all in the span of about thirty seconds as the track opens. I knew this was going be good. Again that soothing inviting beat mixed with the trademark menacing Mendez vocal style is a huge drawing point. Benestrophe, Mentallo & The Fixer and Jihad share similarities in delivery for obvious reasons. The vocal style may be the first thing you notice. They are as trademark as you can can get. Both James and Rich own this style. The great thing here is that many times line up changes can really upset the subsequent output. James found a way to make it his own without disrupting the harmony of Jihad's foundations.

"Visions" is the next dose. The lyrics deal with self-awareness or self-reflection. As I read the lyrics, they really follow very closely to how the mood of song presents itself. As the album progresses to the middle pieces the vocals pierce a little more and music takes a slightly harder edge. As "We Believe" reveals itself to us we notice a change coming. An ever so slight change to be exact. It's here where the vocals start to snarl and gnaw a little harder. The music is airy and all surrounding. "We Believe" and "The Prophecy" are perfect examples of the tempo and attitude shift. "We Believe", "The Patron God Of Embalmers" and "Degree Of (Im)morality" follow in the same vein of "The Prophecy". "Twin Stranger" is mixed in the midway point. It has a bouncier beat than the others mentioned here, but lyrically it is just as charged with more self-reflection blending nicely into the track order. "Matter Of Persepctive" also has a bouncy beat much like "Twin Stranger", but the vocals yield a fiercer delivery.

Jihad's finished product is awe inspiring. The subtle changes in vocal inflections to the tempo manipulations and the sound layers demonstrate a particular skill one needs to possess to create such a polished product. The entire album pulls you in. There is no song too different from the others and that may seem plain but I assure you that is not the case. It's just little subtle changes that really make this a great album from beginning to end.

The artwork seems to fit with the over themes previously mentioned. The cover design shows half James' (it looks like him I think) normal human face and the other half is  James' skull with no skin or muscle tissue. I love the Jihad logo with the partial lettering. It looks awesome along with a DNA strand looking image lurking in the background.

To order the CD, go to Jihad's Bandcamp page. E-mail James at bandcamp@atomcatcher.com.  CDs are $18 plus $5 US shipping.

Bandcamp
Last Influence Of Brain - Insomnicons is available at POPONAUT from 14,95€

Mentallo & The Fixer - 'Music From The Eather'

Mentallo & The Fixer - 'A Collection'