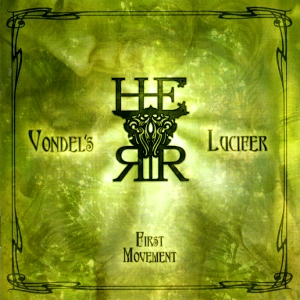 7.5
"Good"
Released 2006 by Cold Spring
Neo-Classic, Martial Industrial
So what happens when an album that has already been hyped up more than anything in recent memory gets delayed by more than Six months? The hype and awaiting of the new H.E.R.R. Album was so intense and tangible that there was almost no way that it could ever begin to live up to it.

This is a reviewer's field day. An album so ambitious, enriched, dedicated and elaborate that one can pull apart each delicate silver thread, and never come to the end of the reel.

This is a Literary Gospel. Themed around, and inspired by the writings of Joost Van Den Vondel (the Dutch Shakespeare, literally), Vondel's Lucifer is a huge tome of Religious and Symbolic lyrical output, and the fact here is that we have a neoclassical piece so intense and demanding that you cannot comprehend it. The lyric book alone is 24 pages.

You're exactly right in your thoughts - the standard four man ensemble of H.E.R.R. simply cannot pull this off, I suspect an entire army of minor deities would have problems. Hence the drafting in of one of the most stunning collective musical contributions I've ever seen.

For this album features no less than Cornelius Waldner (of Sagittarius), Holger from Belborn, Dev from While Angels Watch, and the legendary Richard Leviathan ( Ostara, Strength Through Joy), as well as Oskar van Dijk (H.E.R.R. live musician) and Maria Southgate.

Where does a reviewer begin?

Let's give first and special mention to the prologue track (Innocent Hearts). This is the only track on the album not featuring lyrics taken from Vondel's epic itself. Written entirely by Troy Southgate, this is an absolutely essential piece of music. A Narrative themed around Creation, and Man's forthcoming banishment from Eden, and then the dogma and burden man has carried ever since the Serpent tricked it.

This spoken word Bible is carried with some beautiful, gentle neoclassical medieval music, and the whole thing is just a perfect, intricate experience. This track is also deeply, deeply reminiscent of Current 93. Troy's gentle and at times nursery rhyme like whispering voice owes so so much to Current 93's "They Return to Their Earth" (a track H.E.R.R. also covered once). But the thing is, this goes so much beyond any narrative, as the music that compliments it is so beautiful it honestly can induce tears. And as for the lyrics? You can't imagine how wonderful they are. Troy has such a deep, intelligent and comprehensive mind that nearly all of his lyrics just render anything I have ever heard obsolete.

After the prologue, the album itself begins. It reads as an entire narrative, often as dialogue between Apollion and Belzebub (voiced by Troy and Michiel respectively). The comprehensiveness of the entire lyrical output is just overwhelming. It's literally reading Vondel's arcane plays put to music.

"Of Angels and Men" is carried over a very quiet, very pretty acoustic tune, as we follow a deep discussion between the aforementioned entities. "Too true, Lord Belzebub. Though high our heaven may seem, tis far too low. For what I saw with mine own eyes deceives me not" - follow this kind of context and style through the album, and you have a very basic grasp of the written input. Some tracks are up to ten minutes in length, and there are so many references to so many mythical figures that you just cannot fall to be enticed by this.

We often hear dialogue between Gabriel and Belial as well (Holger and Oskar), and the album reads like Gilgamesh's mythical "Epic of Creation". The Music here is just so rich and established that it has literally rewritten the Neoclassical Genre. An entire orchestra of men could have worked on this for years, it is so intricate that I just cannot imagine it ever played live.

The first absolutely amazing and stunning track is "Meek shall Inherit the Earth" - a chorus of violins play over a beautiful spoken word vocal by Maria Southgate. Maria is Troy's talented daughter who also lent vocals on the previous album's "Requiem for the City of God". Maria has a beautiful, delicate angelic voice, and she steps into the role here like a total professional.

One noticeable point is that as the Acts progress and change, the musical style changes. This is not even a music album anymore, it's a perfect stage performance. "First Prince In Some Lower Court" is a bombastic number, quite Martial, wonderful drumming and wonderful lyrics, mentioning the Fatherland and echoing the overthrowing of Royalty.

Let us jump to Act 3, and not just the best track on here, but the best H.E.R.R. track ever composed, and possibly even the best neoclassical track out there.

"Awake The Stars" is an absolutely divine medieval tune, instigated by the chorus of the band whispering a spoken word intro, discussing God's laws and judgements, while a drum chorus builds it up, before the beautiful melody kicks in (Harpsichord I think). This track just echoes 16th century, it is so medieval in its sound, and when it slows down after the first chorus it just gives goosebumps everytime. Listen for the passage that runs from 1:47 to 1:53.

One of the lyrics in this reads "Ye know not God's Design". The Irony here makes me chuckle, as this track alone is so Godly that it rewrites the entire design in itself. The one sad thing on this track is that Troy barely features at all. Ironic, yet again. I won't spoil the lyrics for you, but again, sit down with a very very open mind and a lot of spare time to take this effort in.

I could so easily write a few thousand words on this epic masterpiece, and the only reason I won't is because everyone has to hear this themselves. H.E.R.R. have pulled off the most ambitious project in Neofolk / Neoclassical history, and amazingly, it has worked better than imaginable. Two years in creation paid off, and the new H.E.R.R. EP is on its way too.

The question is, where do they go from here? They've built a huge empire, and I hope it doesn't fall under their own success. "In love we would yet mingle in their ranks: again to calm this restless discontent".

In closing, H.E.R.R. is a band that everyone honestly, genuinely has to hear, and every single fan of bombastic, intelligent music needs to own at least one album. Inspiring? Oh yes. How many albums can have a track that echoes Current 93 and make it their own?

You won't get a better release than this for quite some time. If you aren't already ordering this as you read this, you're wasting time. Dec 01 2006
Kallabris - '81° n.B., 178° ö.L 7"'
Previous article
Eaten By Children - 'The Sword Swallower's Grave'
Next article

We don't have any stores registered for this release. Click here to search on Google
Növö - Zeitgeist is available at POPONAUT from 21,95€

The Unravelling - 'Tear a Hole in the Collective Vision'

Parasite of God - 'Outcasts and Freaks'