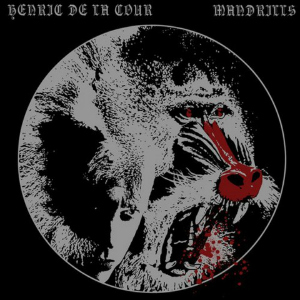 Spotify
Released 2013 by Progress Productions
Synthpop, Pop
Album of the Year #4 2013
Henric De La Cour's second solo offering is quite honestly the most difficult thing I've had to write about in an age - not due to any issue with the music, production, or release, but simply due to the personal nature of it, and the myriad of conflicting emotions I find myself wrestling with throughout.

Henric isn't a newcomer by any means - Strip Music, Yvonne, his appearance with Agent Side Grinder. - all excellent. What makes this (and the self titled debut before it - retrospect is a wonderful gift) so harrowing is the fact that Henric suffers from Cystic Fibrosis (a fact being touched upon in an upcoming Swedish Documentary), and has already, very thankfully, survived far longer than the usual expectations. The truly sad aspect to this, of course, is obvious - and it brings an entire new meaning to most of De La Cour's songs and lyrics (Just listen to "Clinic" - the last time music was this harrowingly personal, Ian Curtis was still alive).

It's to be strictly noted however that 'Mandrills' is both a work of absolute genius, and, perhaps not quite as intentional as it reads at times, almost a diary. Whereas "HDLC" had roots in the Gothic culture, and directly referenced the Sisters of Mercy ("Gothic"), it also drew influence from the new-wave culture as a whole ("80s" strongly echoed Bauhaus). In stark contrast, 'Mandrills' leans closer to the Synthpop era, although it has moments that leap right back to the heart of it all.

"Mandrill" heralds the start of the release, with a Keyboard intro, slightly on the Church-Organ side. Henric's higher vocal range has always been a key point of his sound - it's very distinctive when it comes in. The piece builds into a more EBM- style track towards the end, and although it serves as a great opener, it's also a powerful track that almost ties off from the debut perfectly, acting as a barrier between both releases.

"Chasing Dark" - my god. The intro to this song is breathtaking. Henric also did an acoustic version at Kollaps to promote the release - and it's easy to see why. The first half of the song is a riveting piece, but the chorus is just absolutely incredible. "I ran from the morning, chasing dark" - the way Henric sings this is just textbook, but as the chorus continues, you hear "Seconds left to live" which gives not only the song title and concept, but the entire release a very bleak and depressing feel. Ultimately, Chasing Dark is a huge, huge song and deserves to be a hit. Repeatable en massé.

"Grenade" is familiar from the Cassette/Vinyl single that Henric put out previously. The Venom cover "Harmony Dies" remains an exclusive b-side to that release. A slower piece, initially Grenade seemed out of place; coming off the back of the debut - however it's a great introduction to the more reflective work found here.

"Hank Psycho" comes next, as a sister track to the earlier "Hank Solo". I'm not sure on the reference - it seems to suggest Star Wars, but it seems REALLY unlikely. The slower, more disco intro sounds familiar - I can't tell you why, but it's a nice track to break the album up. Like numerous tracks before it, it has some lyrics that are quite morose, with the gift of insight "The way I feel now, the condition I am in".

This leads into the best track on the album, one of the best music videos of the year, and one of the bounciest, catchiest pop tracks : "Shark". A bouncy intro with a dual vocal, Henric's voice here has never been so good. The video to this track features a doll and Henric in a playroom (Henric has make up on to reflect the scene). The doll's lips move to perform the first vocal, and Henric himself performs the second - it's almost an argument between both characters, and it's done so amazingly well. It sums up the darker, more gothic side of De La Cour.

"Blackie Lawless" directly references the lead singer of W.A.S.P, which with the Venom cover earlier, also portrays De La Cour as having an interest and passion in 80s Metal, too. Don't make the mistake of thinking this is a metal track - at best, it's Gothic Rock with it's heavier workings.

"Sirens, No Harbour" is a song title that could fit on "Burning From The Inside" or anything from that experimental age. A quirky intro, not unlike "Shark" plays advocate to darker lyrics. "If the sea should claim you", "if you get lonesome in the abyss, close your eyes". Another highlight.

"Main Vein" may be a controversial song title, but really, it's the obvious sister song to "Clinic". The last four tracks on here work together to create one of the saddest, most inescapable realizations out there - and I'm truly grateful to Henric for putting this release together. The two-and-a-half minutes before the intro build the track into a beast of a rocking number, but it's also obvious that the song is going to get very, very melancholic.

"Rust on Rust" - This piece starts off with a synthpop intro, but the chorus is, once again, gorgeous. "Call it In" leans into the Gothic Rock genre some more, with an Organ playing alongside the Bass. Lyrically, Henric is at the top of his game, and is a master of combining dark and bleak concepts with beautiful gothic synth. In short, there is something that appeals to everyone.

The album closes with the six minute "Sound the Alarm" - which I struggle to sit through. It's a beautiful track, but the two minutes at the end of Henric singing the title of the song are heartbreaking. The meaning is just poignant, and I will admit this has had me in a very, very distressed way. Perhaps one song a decade has this effect on me, but this entire album has just questioned and challenged me in every way. Perhaps painfully aware of our mortality, this release gives me so much to be thankful about.

The two bonus tracks on the sold-out 2xCD version are also worth a mention. "Fear the City Inside" is filled with Gothic Rock - the intro screams Fields of the Nephilim, and even Henric's voice is more tailored to the style.
"Raven Haired" is a beautiful, tragic ballad that's given me goosebumps.

I think ultimately, as a reviewer, I have to be very careful not to make the artist into a martyr - and I've tried not to do that. One thing that I do want to touch upon is just how beautiful Henric's style is. His voice and lyrics together are really emotive.

'Mandrills' is one of the albums of the year for me. I'd go as far as to say one of the album's of the 2010's, so far. I also want to extend a thank you to both artist and label for putting this together in the way it has been. I'm thoroughly, deeply moved by this release. Musically, it is not perfect. I think, for example, the vocals on the opener could be a little clearer in the mix, but at this stage, it doesn't matter.