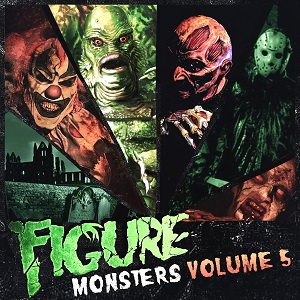 6.5
"Alright"
Released 2014 by DOOM
Dubstep, Hardstyle
Ah, Halloween. What a splendid holiday to celebrate; it's a night where we trick the devil into thinking we're all Demons, and also a night where toting young children go about and collect candy from house to house with lots of love. It's also a season where many, many artists come along to create music that will celebrate the holiday with evil tendencies. And that's what FIGURE aims to do.

This electronic music producer, or, as he likes to call it, BASS HEAVY MUSIC, is Joshua Gard from Indiana. He has had a history of musical production, and recently donned the name of FIGURE a few years ago, becoming a leading character in the electronic and dance charts as both musically skilled, along with lively performances.

And, in relation to this release, the annual Monsters series began back in 2011, where Gard was finally able to mash the two things he loves most in life (music and horror movies) into one collaborative effort. The series became so popular that Universal Studios used it as the official soundtrack to their Hollywood Horror Nights theme park.

And this year marks the fifth year in which FIGURE returns to the series with Monsters 5. Thirteen tracks of supposed darker images and inspirations taken from horror movies the world over wrought havoc on the electronic playing field, so, with an open mind and Halloween crammed in my brain, it was time I dove into the album.

The thunderstorm and creaking door that opened up the first track, House on Haunted Hill was lovely, with a nice sampling and organ play. It was soon overtaken by a simple bass dropping beat with looping organ sounds, and even some nice spine tingling piano work. If anything, the beat really took notes from classic movie soundtracks and morphed it into something for the modern age. Though I'm not huge into rap, CasOne came in with nice little rap lyrics, fitting well into the beat, and talking of spooky shit here and there. It was lovely, and clean, and was written all for fun. The second half of the song dropped in heavy doses of dubstep, and came in and out between the organ and piano work. Great job with the opening track from both artists.

Monster Mania offered up another ambient layered intro, but, unlike the first track, it sort of lost light as to what it was supposed to be. Rather than having horror atmospheres aside from a little synth line here and there, or the occasional thunder sound in the backgroud, it really just landed into more standard electronic territory. Though it wasn't bad, it wasn't really what was advertised, either. The outro, however, was on spot, using more sound samples to send some creepy effects down your spine.

It's Alive came in with more dubstep influences, and where I found fault within this track was the same as the last; beautiful opening line, but the song eventually just went back into complete electronic dementia. Once more, the beat wasn't bad, but it just didn't do what the album tried to advertise to the audience. The line where a man spoke out, glitching for a repetitive effect, "Hey, motherfuckers," was completely unnecessary, and didn't do anything but detract from the overall experience. However, again, the outro was absolutely wonderful and atmospheric.

Coming in as the fourth track, Friday the 13th went on to have a great first minute and a half. Tremendous work in the sense that all was left to be creepy. The rest of the music (dubstep inspired once more), came off great. There were screams that played alongside the electronic drops just nicely, adding into more of the horror feel. The samples that played during the middle of it, and, just like any good horror movie, there were sections that quieted down for just a moment before jumping back up to scare you. This was a song that was done extremely well on the album.

Track number five, Never Sleep Again, served as a little interlude. Fairly quiet, with a few little electronic tidbits here and there, but, for the most part, maintaining a morbid ambient atmosphere with the slightest of creepy shouts in the background. Great work done on this track's part.

Freddy Krueger came in as track number six, and even opened up with the infamous line from the child molesting slasher, "Welcome to my world, bitch.". It even went on to quote his line which begins with "One, two, Freddy's coming for you..." and went on all the way down to numbers nine and ten. A great tribute to a horror movie icon, and there were even parts where young children sang the same line, albeit it came off more creepier, and it was almost subliminally placed underneath all the bass at certain parts.

Pumpkinhead came up next, and featured Kool Keith, and had an alright intro, not as good as a few other tracks on the album. The rap this time around wasn't as good, and was off beat, and didn't really go off much horror inspired lyrics as I would have hoped. This one wasn't my favorite.

Return to House on Haunted Hill brought back in more organ work and piano work mixed with the heavy electronics, and much remained the brother track to the first one. It was good sounding, but a bit of a repeat effort.

Evil Dead had some decent sample placing, but didn't really go for the whole horror feel. It kind of just went back to the electronic heaviness with lots of bass that FIGURE is good at creating. Although the final sample of Ash saying, "Hail to the king, baby." was pretty wicked.

Pennywise the Clown featured CasOne once more, and had some more decent sample placings from the movie It based on the King novel of the same name. The rap delivery once more were well done, except for the looping line that went, "Everybody floats because everybody floats". But, the lyrics were sickeningly grotesque, but clever, and I enjoyed. Kudos to both CasOne and FIGURE for collaborating on two awesome tracks.

Jason is Dead featured Bitter Stephens, and he raps from the point of view of a slasher named Jason. He even talks about killing teenage bitches. And, while normally that would be a derogatory statement, Jason literally does kill teenage bitches. Who are normally overly sexual. So, the statement fits properly.

I didn't have much to say about Creature from the Black Lagoon other than that it was some more dragged out bass lines with dubtstep tunes to it. And, finally, Stay out of the Cellar served as the outro. Dark ambient tunes lay in their wake as you went through this, simple as it was, it still managed to settle in a creepy tone.

And, that's that. A lot of these songs will make the horror fanatic ooze with joy at the mere amount of samples placed within the tracks, and will even probably light up some dance floors on Halloween night. However, where the album also falters is in its promise to deliver something dark and creepy. Honestly, this album was more fun than anything. I wasn't creeped out or scared going through it, nor did I get the chills associated with a real spookfest. It's in that light that the album failed to really nail home on its promise to deliver a dark, Halloween album. Nonetheless, I can still sit down and enjoy this, and though some songs take too many notes from another to form a bit of a similar sound, I can imagine a lot of electronic/dubstep fans will find a whole lot to love in the fifth entry of the Monsters series.
# d-styles
# figure
# brawler
# monsters-vol-5
# bitter-stephens
# casone
# kool-keith
# dirty-deeds
Sep 29 2014
Interview with PreEmptive Strike 0.1
Previous article
Red Mecca - 'Covered With Rain'
Next article

iTunes
Nolongerhuman - Antipathy is available at POPONAUT from 12,95€

Mindware - 'Shut It Down'