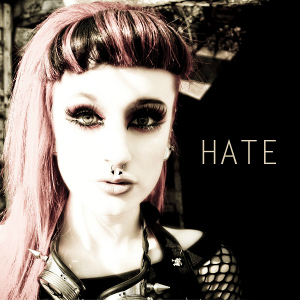 7.5
"Good"
Released off label 2013
Industrial, Metal
If you follow God Module as closely as I do, you may have discovered this gem out of Louisville, Kentucky. Outside of the large thriving indie scene home to My Morning Jacket and the post-grunge act Days of the New, just to name a few, comes a self-described "Anti-Industrial Rock" band by the name of Empyrean Asunder. Being from the unlikely place of Louisville, opening for one of my favorite bands, the alluring band name, and the fact that I'm a sucker for female vocals, I had to do myself the service of checking them out.

Those who found rejoice in such female fronted bands like Kittie, Otep, Arch Enemy, etc.--you know, those metal bands that had female singers that blew you away when you heard a female scream like that, who showcased a side of female vocals that was previously unheard of in popular music--but also love alternative electronic music will more than likely find a similar rejoice while listening to Empyrean Asunder. OH! And might I add that Empyrean's vocalist Olivia just turned 17 prior to recording Hate.

The band infuses elements of metal song structures with the uncompromising energy of punk, they take that and combine it with electronic elements of industrial, glitch, and dub-step, then throw in a splash of pop over singer Olivia's vocal scale and violin serenading, my admiration began to grow.

In March 2013 the quintet--whom is currently looking for a 6th member to handle the drumming duties--self-released a five track EP/ demo entitled, "Hate." The EP is available for free download through their official website as well as the social media outlets ReverbNation, SoundCloud and now BandCamp, which I highly suggested to them. The only qualm I had with the downloads is that they were originally provided in 128kbps--if I'm going to hear music in mp3 format, 320kbps is the only acceptable bit rate.

The first track Almost Serenity immediately starts off with (noticably) triggered drums--which makes a lot of people cringe, and the fact that a large portion of their target audience is the Metal crowd, it will be hard to gain respect with these recordings and/ or during live shows..but hopefully with the right exposure and promotion, that void will be filled by the addition of a drummer--Trailing off the drums comes a melancholic melody that is slowly built up by angst filled lyrics that are almost rapped, but with a punk-ish/ grunge-y tone to her voice. Early in the vocal presentation of this song you can hear a vocal delivery style that is reminiscent of 90's grunge bands like Alice in Chains.

One of the things that I find unique about Empyrean Asunder is that in some songs they have synthesizers and piano in the same composition, gives it just a little bit more contrast to lure the listener in. The next track, You Are My Punishment is definitely aimed towards the electronic lovers who enjoy a little angst ridden vocals on their pallette. Definitely sounds like it would be a staple during their live sets, a fun number to dance to and get out some aggression to. I can imagine some great remixes coming from this song.

Love At Your Own Risk sticks out with it's really dark, descriptive lyrics depicting one's fantasy of how the world will end. "It never speaks but can't confuse - the lack of converse - With the power to listen - It learns our morals - And the lack thereof - The vision is to plot our demise.." This song will definitely appeal to the metal lovers, as for the most part it's a heavier track with melodic verses. A part of me kind of wishes that the song was a bit longer, perhaps as time goes by the song will have some new life breathed into it so-to-speak. The addition of a drummer could help make the drum lines more solid and variable.

The Aftermath brings in that uncompromising punk energy in the form of a cyber-punk melody reminiscent of early Angelspit. After the song's intro, the song takes a turn into an hybrid of electronic metal presented with a fierce vocal delivery from Miss Asunder. I really love the whispered vocal parts with the lullaby-like piano melody for some reason, it must be the contrast between the structure of the rest of the song.

The song that really captivated me from this band was the last and final track of the EP, "Killing Floor." It starts off with a beautiful serenade, and then turns into this brutal, metal + dub-step machine of a chorus. The production kind of reminded me of Ruinizer in a way. A remix by them would be highly complimentary. This track also has the most audible violin incorporated into the song's structure, which made it stand out from the rest, and left me asking myself why isn't there tracks more like this? With this kind of production and delivery. I would definitely treat this song as a single.

Overall, this release left me hungry and wanting more, something a band should want and be aiming for. I would rate it a 7.5 out of 10. The content is teetering on great, partly due to the mixing--which is often very muddled sounding. Without a real drummer, there is a lack of life in the drums--no pun intended. Drums bring in so much dynamics to a band's sound, changing the tones of your bass drum, hi-hats, snare, etc. can make such a big impact on the sound. Toy around with the sounds while you're programming, if you're not sure about the sound, send it to a fellow colleague for constructive criticism.

The band's sound has been carefully created over the course of the first incarnation, and now it's just being fine tuned with the second incarnation. The inclusion of modern day production like dub-step added a really fresh sound and could be highly complimentary if it was included a little more, but not overused. With the singer's ability to play violin, that is something that should be highlighted more as it definitely adds to the already unique blend of sounds. The first demo had a display of string instruments, so maybe create a violin solo in a piece, bring in a guitar solo. And get remixes, bitches love remixes.
# industrial
# metal
# dub-step
# glitch
# ebm
# louisville
# kentucky
# empyrean-asunder
# olivia-asunder
# eroxthis-asunder
# electro
# punk
# theatrical
Apr 12 2014
System:FX - 'We Are The Broken '
Previous article
Abducted By Sharks - 'Siege Engine'
Next article

Empyrean Asunder BandCamp
Hocico - Blood On The Red Square is available at POPONAUT from 9,95€