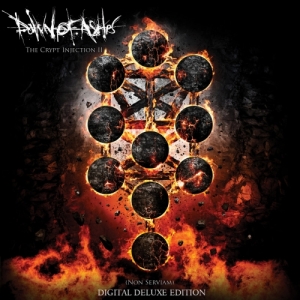 8.5
"Great"
N/A
Electroracle
Released 2019 by Metropolis Records
Industrial Metal, Metal
Dawn of Ashes has been bleeding black metal into their signature hellish playing fields for their past two albums "Theophany" and "Daemonolatry Gnosis". While I have found the sound to be worthy of praise from all nine circles of hell, there was a huge part of the Los Angeles band's fanbase who were calling for a return to roots. What I am finding on Dawn of Ashes' new album "The Crypt Injection II (Non Serviam)" and sequel to their original hit is not a complete return to form, but an evolved understanding of both production values and intermittent combinations of diabolical synthesizers and heavy riffs.

As with any thematic release from Dawn of Ashes, the album starts with an opening song titled 'Thirteen Chants to Lillith'. This little ode serves as more of an ominous precursor as to what I was about to get myself into before I was thrust into the opening notes of 'Reborn in Fire'. The menacing undertone complete with a steady drum pattern and devious, dark whispers in the background found itself washed away with a heavy scream from lead vocalist Kristof Bathory and a slamming beat. I first opened this album when I was at the gym - and let me tell you that I knew this album would be fantastic audio fuel for listing.

'The Serpents of Eden' continued the mayhem with an opening featuring what I believe is a hellfire preacher spewing religious sentiment unto masses. Setting the groundwork for the rest of the song, I was treated to an intense battle of guitar driven dark electro. Moreso catering to the black metal aspect of Dawn of Ashes, the backing synths and underlying rhythm still gave it a kick for the starving electronic crowd.

I was not a huge fan of the opening of 'Ahirman' as it sounded a bit raw in comparison to the rest of the album, but those thoughts were soon washed away as Dawn of Ashes brought me into the thick of their Mephistophelian anthem. 'Slaves to the Addiction' gave me a hard on for the backing organ found in segments in the song; such as around the two-minute and twenty-second mark, we are greeted with the backing organ and a slight hum from another set of vocals. This contradictory set-up was beautiful.

'Sitra Ahra' was one of my favorite songs on the album as it slowed down the pace of the album but did not heed on any unhallowed behavior. Working with many organic synths and slamming percussion rather than being a spitfire track finding its base on speedy guitars, 'Sitra Ahra' worked its way into my veins and felt cinematic. However, that sentiment was riddled and shaken by the sounds found in 'Spirit of Anger' which saw a minor change in vocals. Continuing the cursed growling Bathory has so perfected after all of these years, he also experimented with much more raw chords throughout the song a la the black metal genre in general - and it worked oh so well.

Industrial and dark electro enthusiasts more than likely had a spurt of euphoria as Johan Van Roy appeared on the album for the song 'Hexcraft'. This is an easy example of two artists combining both their ideologies into one session; Bathory's heaviness and Van Roy's technical achievements shine through, and hearing both artists sing on the same song was enchanting.


'Abuse the Abuser' brought the album back once more, allowing each and every note and orchestral moment to sink in. Though this piece was filled to the brim with samples, I felt as if they were a bit hard to understand as they were muffled underneath the sound of the music. The only other part of this song that I had a minor complaint about was when the line, "You fucking piece of shit" was shouted. I understand where the song is coming from, but such a stereotypical and often said line being thrown into the midst of such a wonderful piece of music did not sit well with me.

And finally we have come to the title track of the album, 'Non Serviam'. The song begins out with a tribal setting which - as per the theme of the album - was crushed by synthetic sounds and harsh aesthetics. However, this base was not entirely foregone as the song went on and gave its all as it pulverized its way through. I feel if there was any song that would be old-school Dawn of Ashes more than the other on this album, you would find it here.

The final ending song of the album 'Entering the Realm of Shadows' also saw itself as being the most industrial with what I would consider some factory noises and dark ambient essences all about. I could almost see this song being used in the video game franchise Doom.

This album then works its way into the remix section. There should be plenty for people to love here as a ton of heavy hitters throughout the scene come out to play, including Hocico, Chris Vrenna, Lucovico Technique, Alien Vampires, SHIV-R, Reaxion Guerilla, and C-Lekktor. But, as usual with remix sections, I usually find one worthy of special mention. That mention is going towards SHIV-R this time. It's funny how this played out, but SHIV-R took 'Slaves to the Addiciton' and transformed it into a track ready for a club dancefloor, not a hardcore mosh - and it doesn't sound bad in the very least. Kudos to them.

I find pleasure in Dawn of Ashes new album. While I will always admit I was never a huge, huge fan of Dawn of Ashes earlier work minus a song here and there, their new transformation has made me come back listening to them over and over again. "The Crypt Injection II (Non Serviam)" will continue that personal trend as they have managed to truly blend their old school, dark electro style with their newfound love for black metal mechanics without ever sounding off. Not only that, but the band manages to create songs that can last up to seven minutes in length without it ever getting boring - a feat that a lot of projects struggle with. These songs can have up to two to four unique and differing segments to them while all fitting cohesively. Dawn of Ashes have easily carved a new legacy for themselves, and this album will stand out from their discography.

Dawn of Ashes "The Crypt Injection II (Non Serviam)" is available for purchase in both physical and digital formats HERE.

Bandcamp
Dawn of Ashes - Daemonolatry Gnosis is available at POPONAUT from 14,95€