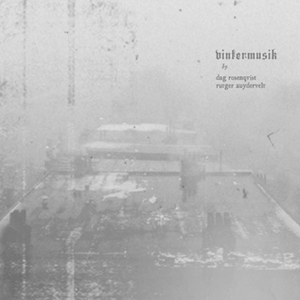 7.5
"Good"
N/A
Electroracle
Released 2011 by Machinefabriek
Dark Ambient, Noise
I've always been a fan of excellent ambient noise music. Masterpieces from genre greats like Aube have been transformative in laying the foundation for a more atmospheric noise music experience that derives inspiration from a wide variety of different sources, ranging from conventional dark ambient masters like Brian Lustmord to hard noise virtuosos like Merzbow (Who has always been willing to shatter expectations).

Today, we're featuring the work of Dag Rosenqvist and Rutger Zuydervelt, who collaborated back in 2007 to create a challenging and titanic series of ambient noise tracks that attempt to capture the essence of frost-bitten iron and broken, howling machinery in order to bottle it for consumption by their dedicated cadre of fans. The album, originally on limited release over seven years ago, has been remastered and re-released through Rutger Zuydervelt's Machinefabriek label.

The experimental album opens to a piece appropriately called Frost. Slowly, a cacophony of metallic noises rise and evoke feelings of cold isolation. The production is clinical, but not in a way that detracts from the feeling of the piece overall. Various sonic instruments fade in and out over the soundstage of the track, evolving over time while subtle vignettes populate the long space between gradual musical transitions. It is truly a sensory experience. The world that the opening track creates is starkly hollow and cold yet not entirely desolate. You can smell the cold metal pipes, and the tedious rattling of old machinery in some remote and abandoned substation in an arctic wasteland. This is the closest you can get to experiencing the feeling of living through a hermitage in some far removed research or technology station in the unforgiving climates of the far north-all without taking off your headphones and leaving the comfort of your home.

Effective usage of field recordings only add to the intensity of what Dag Rosenqvist and Rutger Zuydervelt have managed to create. Droning synths and organic samples are utilized to create a minimalistic formula that is highly effective in demonstrating the concept of the album. Snippets of instrumentals can be heard sparsely throughout, layered beneath crackling static and icy winds that serve as a constant reminder that the listener is cold and alone, and among heaps of malfunctioning technology. It is an incarnation of the flickering lightbulb found in the cinematic compositions of the horror genre's best cinematographers and directors. Malfunctioning technology is a sort of uncanny valley that is deeply disturbing, as it implies that in the absence of human beings, the property has fallen into such a state of disrepair that common fixtures are left in the poorest condition possible; or even worse, that the occupants no longer care to maintain the integrity of the property. It has unfortunately become a genre cliche because of its effectiveness, but Vintermusik's utilization of this popular trope is neither trite nor overbearing.

Ljus i November, the fourth song on Vintermusik, begins with a noisy guitar drone (Reminiscent of some of the more experimental post-rock ambient projects I've heard-but not at all unwelcome in this environment) which abruptly pours into melancholic, nostalgic piano and sampled sound effects of children at play; this is perhaps one of the more humanizing moments of an unforgivingly mechanical slog through alternating noise, drone, and dark ambient vibes that pervade the collected pieces. This quiet comfort does not last for long, and transitions back into shrill feedback and deep, sticky guitar drones that are so heavy, you wouldn't be able to pick them up off the floor if you were a championship deadlifter.

Sadly, Vintermusik is not without its faults. Tracks like Tappad vante and Feberdrom fail to amaze, especially given the length of the latter. Where the album succeeded in its first half, it does not feel as strong in its second. Gone are the strategically-placed field recordings and unexpected transitions which provided an exciting framework for the album's conceptual design, and something interesting for veteran noise fans who've heard it all before. In the second half of the album, the cohesiveness of the concept and placement of sound elements in the composition seems to weaken and give way to less inventive and far more procedural sonic design. I felt that in comparison to the first four tracks on the album, the last few had a much smaller soundstage and lower level of variation. I did not feel as immersed as when I had first been surrounded by a wide array of different sound elements that not only kept things interesting, but also more effectively demonstrated the capacity for noise ambient music to evolve beyond the traditional limitations of the genre.

This is not to say that Vintermusik is not a piece of noise ambient music that should not be experienced by any avid listener of the harsher genres of experimental electronic music. The album's highest points are very high indeed, and create a robust and wholly immersive package that is overwhelming to digest in one sitting. It is genre conventions and tremendous length that injures the experience in the long run. I feel that a lot of content could be shaved down in minutes without detriment to Vintermusik, as some of the weaker tracks dragged on for such a long time that they detracted from the more experimental and surprising moments that I heard earlier on in the experience; granted, we have to remember again that Vintermusik was first created and self-released in 2007, long before the Internet turned the dial up a few notches on the speed and proliferation of experimental music concepts.

It is worth looking at the extensive catalogue of Dag Rosenqvist and Rutger Zuydervelt's music which has been made available on Machinefabriek's official Bandcamp page. These are a couple of world-class musicians who have yet to disappoint, and Vintermusik is definitely worth a listen for anyone looking for some excellent and previously unavailable noise music.
# dark-ambient
# experimental
# noise
# noise-ambient
Feb 18 2015
Porya Hatami - 'The Garden'
Previous article
Interview with Dark Machine Nation
Next article

Bandcamp
Supreme Court - Keep Calm + Carry On is available at POPONAUT from 7,77€

The Elderbranch Campaign - 'Soundtracks For The Aftermath of Violence'