Cryogenic Echelon - Costume of a Saviour 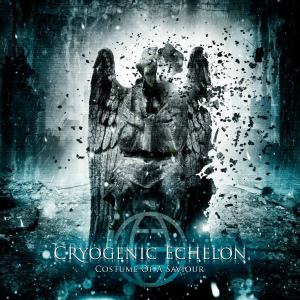 9.0
"Amazing"
N/A
Electroracle
Released off label 2012
Dark Electro
Cryogenic Echelon are back with their debut album "Costume of a Saviour" - The follow up to 2011's "Fall of Reptiles" EP which was one of the last releases on Ben Arp's (C/A/T) label 'Crunch Pod' . With this release the EP's tracks are included but packaged with new remixes of them, and brand new original tracks as well.

1001nnnn (Note ON) - The intro track to the album is over just 1 minute and is a soundscape of pulsing synths and very well layered lead synths before electronic percussion comes into the mix, helping with the build up and eventually adding choirs before the track comes to a close.

Zaibatsu - The first proper song up is "Zaibatsu", opening with strong arpeggio synths and whispered vocals before the kick drum comes in, before disappearing again paving for the way for piano and more synths. It then jumps straight back, with the aggressive side coming in with screamed vocals; interspaced with samples and leading into a strong beat to the end and repetition of the chorus.

Fall of the Reptiles (No Mercy Mix by Studio-X) - one of the new remixes of the track "Fall of the Reptiles" is by no other than Studio-X and is a more hard dance/hardstyle interpretation of the track with a long build up - when it comes to it this mix hits you like a punch in the face with a real punchy kick drum and clap sound snare drums and some great lead lines.

Deep In Ecstasy (Eve's Overdose Mix)- An alternative mix of the track "Deep In Ecstasy" from the 'Fall of the Reptiles' EP it still features the samples of Hannibal from the films 'Silence of the Lambs' and 'Hannibal'. It is very similar to the original from the EP with little or no changes at all but none the less still welcomed.

Elixir- Back to new material, here is "Elixir" - it opens with a strong and melodic lead line before breaking to a sample and coming in with a heavy off-beat bass line, a strong kick and snare and more layered melodies, there's harsh distorted vocals throughout the song there are multiple melodies and lead lines and some very strong bass line note progressions, however the mix on this track seems to be very hit and miss at times with the vocals only just being audible. Musically there are always new parts coming in that help to keep the song interesting throughout.

F*cking Money- Another track from the EP, this was a favourite of mine; it features voice samples from "Grand Theft Auto: Vice City" and begins with a female vocal line before going into the main part of the song with the kick drum ,more whispered vocals in the verses then following into the breakdown with more vice city samples and more synth layers coming in to keep the song fresh before eventually coming to a close.

Hate Yourself- Opening with a punchy snare and kick drum before leading into a repetitive bass line and more harsh vocals, this could be considered one of the most aggressive songs on the album with lyrics stating "hate yourself, you are manufactured" really taking out his frustration on people who could be considered 'fake' and does this very well a very strong track with samples of females vocals and leading off to the breakdown where another melody comes in building up to the end before eventually leading to the end.

Infinite (Feat. AJ Afterparty) - (Ascension Ex's Vocalist {Nick}) - A more surprising track so far, this is a collaboration track with AJ Afterparty and is probably the most different track on the album with vocoded repeated almost 'chanted' vocals, highly detuned synth lines and an electro house sound to it but it still manages to keep in character with Cryogenic Echelon's industrial sound and also manages to be extremely melodic with its well layered melodies and well placed percussion over the kick drum - a welcome change.

Kill the Camera- Building up with a back and forth synth line before kicking off into the main song, the verses have a catchy bass line to help drive the song. "Kill the Camera" is a strong track aimed at the dancefloor with a straight memorable chorus and even a slight use of melodic backing vocals later on in the track to help keep the song interesting.

Hate Yourself (Studio-x Hard Dance Remix) Studio-x make another appearance on the album with their hard dance remix. As always, a great and interesting remix with chopped female vocals and strong bass lines. The remix itself is more like a reworking as it sounds like a completely new track in itself with its long build up really helpimg set the pace of this remix and doesn't disappoint when it does build up into the main part of the remix.

Hate Yourself (vProjekt Remix)- Up next is another remix of "Hate Yourself" courtesy of "vProjekt" - this is a more down tempo affair compared to the previous remix with quiet almost faint melodies and chopped and reversed parts coming in with a strong but slow but with an almost dubstep like vibe to it following an almost in your face like pulsing bass line later in the song giving a sense of progression before going quiet again signalling the end.

Fall of the Reptiles - last but not least of the original tracks is the EP title track "Fall of the Reptiles" kicking off with staggered synth lines and samples describing what a humanoid reptile would look like with a slight pause before launching into vocals starting from a small whisper to full on screaming in the verses before taking a breather into the chorus with more female vocal samples spaced through out and multiple layered percussion giving a very layered approach.

Soulstorm (Feat.Psykkle) - A Brand new track now featuring dark electro act "Psykkle", "Soulstorm" really does live up to its name with its subtle melodic beginning before its strong stomping beat and clapping snare drums and aggressive harsh vocal delivery make a strong closer to the last bit of the original material on this album - but no matter how aggressive this track is, throughout its bridge/breakdown section it manages to balance the melodic and harsh sides with clean melodic female verses which totally caught me off guard, leaving a nice touch to the song making for an extremely strong closer.

Hate Yourself (Dawn of Ashes Remix) - Back to remixes now with Dawn of Ashes taking on the track "Hate Yourself", starting with horror like edgy strings and hard hitting percussion in places and then starting to build up with bassy synths and white noise like glitches starting into the main part of the song with choir arrangements before dropping the tempo for the vocals to come in with also distorted acoustic drums coming to the front reinforcing the percussive side of this remix before going up tempo I found the tempo changes in this remix to be especially effective in the remix making a nice change to the usual non stop four on the floor approach.

Hate Yourself (Blast Radius Euphorithanasia Mix)- Next up is Blast Radius taking a more breakbeat approach at the start with interspaced female vocal samples and also the vocal lines from the song itself. Then adding ambient synth like touches to the song come in before the distorted breakbeats come back in and short stabbing synth melodies come to the front along side the vocals then building in tempo to a four on the floor beat alongside the melodies piano parts appear managing to make an aggressive song almost delicate and relaxing.

Hate Yourself (Psyclon Nine Remix) - WOW! Now this was something I wasn't expecting at all! First Dawn of Ashes now Psyclon Nine what a shock this was to me seeing this name as a remixer starting with an eery beginning of metallic hits and almost like screaming samples before come out of nowhere with a heavy beat and detuned lead synths and interspaced child like screams in the chorus parts before breaking down for breathing space before kicking off again. A frighteningly pleasant surprise to the remix portion and I am blown away.

1001 nnnn (Note Off)- Closing the album is the soundscape track "1001nnnn (Note Off)" leaving off from where the intro track closed this continuation adds things such as choirs to the mix and scream like samples along side a strong synth pad progression driving the song and the use of string arrangements helps reinforce the track before delivering a pulsing kick drum to the end a good sense of continuity helps even more in closing the album.

Well what is there to say a great debut album and a bargain really not only you do get some great new original tracks you get the pretty much get the whole of the Fall of the Reptiles EP as well strong points about this album is the tracks keep you guessing throughout the album and the use of collaborations works very effectively and keeps the musical direction of the album versatile and open to many different ways also the remix portion of the songs works well even though it?s many remixes of one track in cases but each remix has there own sense of individuality making it work very well for Costume of a Saviour. But the mixing in places can be desired for with parts and vocals almost disappearing in parts, which can sometimes be a pain in parts such as verses and choruses. I'm going to give costume of a saviour 9 out of 10 for use of versatility in collaborations a strong portion of new original tracks with a strong sense of progression form previous releases and also a high quality when coming down to remixes a very strong debut full length release and I look forward to seeing what cryogenic echelon have in store next.
# cryogenic-echelon
# industrial
# ebm
Jul 09 2012
Chrom - 'Synthetic Movement'
Previous article
I Nation - 'Sounds of the Sea'
Next article

Bandcamp
Lords Of Acid - Lust is available at POPONAUT from 25,95€

Cryogenic Echelon - 'Fall Of The Reptiles'