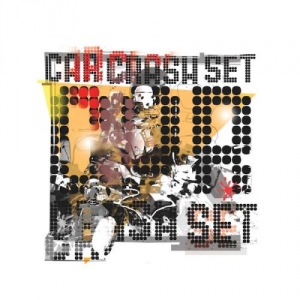 9.0
"Amazing"
N/A
Electroracle
Released 2016 by Polytechnic Youth
Minimal, Synthpop
As the first sounds were emitted from my system while driving to work, I was immediately intrigued with 'Hit And Run', the instrumental opening track to Join The Car Crash Set anthology CD. 'Hit And Run' tantalizes the senses hard with wicked synthesizers airing out ear-pleasure to arouse the curiosity to explore further into the seemingly lost history of one of New Zealand's best kept secrets.

'Outsider (12" Version)' along with "Fall From Grace" originally appeared on the highly touted Two Songs 12" from 1983 on New Zealand based label Reaction Records in which most of Car Crash Set's music appeared on in the early to mid 80's until Anna Logue Records worked out a deal to reissue their music in 2008, 2014 and again in 2016. 'Outsider (12" Version)' mainlines a dose of unmistakeable Kraftwerkian influence and brilliance into the arrangement while Nigel Russell reveals the soothing melody and range of his vocals. Trevor Reekie injects his guitar twangs adding more sounds and substance to the song. The guitar would later play further roles in subsequent releases. 'Fall From Grace' actually appears later in the release, but it is an important piece in the genesis of the band, so i'll present here as if it were the original 1983 release. 'Fall From Grace' demonstrated the range and diversity of Car Crash Set, with its first two tracks back in 1983. Nigel's vocals take a more baritone route conjuring the inevitable comparison to Joy Division's Ian Curtis of whom seemed to trademark that vocal style. 'Outsider (12" Version)' and 'Fall From Grace' surely should have catapulted the band to more recognition outside of their homeland New Zealand. Many of us are thankful for Anna Logue Records for the chance to hear this music.

'Toys' was originally released on the 1983 We'll Do Our Best LP. The compilation comprised of a wide range of artists from the abstract to post punk, punk and synthpop. 'Toys' falls into the synthpop genre and seems to use a toy analogy to describe a relationship set to a minimal electro bassline paired with a chorus making this a must for documenting the work of Car Crash Set.

'Heart Of Stone (Demo)' unveils a post punk laced guitar chill, setting the stage for an addiction this brilliant track. The cold rhythms rip through the speakers constantly stimulating the paracingulate cortex to point where love and desire for a song are born. A non demo version of "Heart Of Stone" also appears on Join The Car Crash Set CD. The overall style is the same but the sound feels deeper and the tempo seems just a fraction slower than the demo version. The difference is noticeable in the beginning, but takes nothing away from how I feel about the song. "Heart Of Stone" appeared on the debut LP No Accident in 1984.

'Another Day" 7' was released in 1986. I'm not sure where this demo version is from, perhaps an unreleased version? Musically, "Another Day (Demo)" is reminiscent of late Joy Division and early New Order and vocals take leave the baritone behind for a more poppy feel reminiscent of something off of New Order's Power, Corruption & Lies LP from 1983 or Brotherhood from 1986. If the points of reference don't resonate, 'Another Day (Demo)' could easily have fit into the early 80's MTV video rotation.

'Imagination' and 'Those Days' appear on the second single released in 1983 as a 12". The vocal approach showcases the backing vocals of Sharon Tuapawa adding a touch to the already diverse vocal approach Nigel has perfected. 'Imagination' picks up the pace and intensity with David Bulog dazzling us with his keys and Trevor Reekie's guitar keeping us wrapped up in the craftiness of Car Crash Set's creativity.

in 1984 Jayrem Records released a compilation called This Island LP. It was compiled with bands influenced by jazz, alternative and pop rock. Car Crash Set's "Justice" appears on this release and seems to fit well with delivering the funk via Ryan Monga's bass guitar leading the way to a fantastic groovy vibe! Not included on this release are a few other songs that are available digitally on iTunes. Check out 'Breakdown' and 'Sax Appeal' for more funky beats with some jazz appeal.

'Love Situation (Early Synth Version)' has a raw feel and big fat bass piece strumming the love and attraction two people have for each other. Like every track the band creates, the music is top notch, the lyrics are memorable and the vocals are never inaudible.

The final track on the one and only LP the band released No Accident, we find 'Your Eyes'. A mellow ballad-ish track about painful memories. Like many well done ballads there is a catch to the song whether its in the music or hook into more uptempo piece or the sing along chorus to whatever. 'Your Eyes' grabs you with a little of everything.

After hearing this, one would wonder how Car Crash Set wasn't signed to a label back in the 80's? They certainly had the talent and sound for it. It borders on criminal how this stayed obscure for so long.

The CD comes in gatefold style case. Included are millions of credits for the songs and several pictures. The artwork is somewhat abstract. I think I see crash dummies or stormtroopers on the front cover artwork.

Fans that enjoy the 80's synth love should quickly find a way to buy this as soon as possible. There are 2 vinyl versions release years ago and this CD version to choose from. Pick your favorite band from the 80's from Duran Duran, Twins, Split Enz, Secession and Car Crash Set will fit elegantly into your musical taste. This is the best reissue I have heard in recent memory!!!!!!