C2 - QUADRANTS: the stories of four 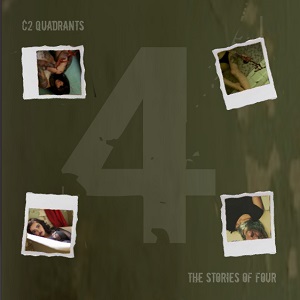 8.0
"Great"
N/A
Electroracle
Released 2013 by Control Freak Records
Rhythmic Noise
This is an interesting project I have never heard of before in my life, even though they've been reviewed on the site in the past. However, this is a pretty great act that has released a multitude of EPs and albums in the past, and have struck back in 2013 with QUADRANTS. Homing in everything from rhythmic noise to EBM, DnB to ambient, C2 has everything and anything involved with their albums.

The history is quite simple, really. The act has been active since '97, and has been performing live since '99. Saying that they've been recording their material and hibernating within a garden shed (I'm not even sure if that's to be taken seriously at this point), the act came back in 2013 with two EPs and this album.

And the New Zealand act has certainly come back aiming with high goals. You could consider this album a concept album as it does come with a 16 page, full color, photo essay graphic novel booklet as well as the CD, so you're getting more than you normally bargain for.

Anyway, the real prize here comes in the form of harsh music that is quite unique. As most of the songs are instrumentals, the first track might throw you off a bit. scream in the mirror gives us some vocals ran through some sort of vox effect, and comes out sounding like something you'd hear off an electro-industrial track. The beat itself is pretty grand as a whole, having a bouncey beat and adding in a few elements of glitch. This turned into a wonderful song in no time.

everything dies took a major transition from the first song, as it started off fairly electronic until it blasted right into a rhythmic noise/ powernoise track. Having a steady beat and a low underlying synth as well as a sort of hit here and there, it was another good song.

suffering continued the instrumental trend, including a lot of noise to go along with its steady beat. However, the beat is not necessarily something that comes to attention in the song; rather, it's everything else surrounding it that really caught my attention.

four on the floor started off fairly simple, with minimal electronics surrounded by noise that came in and out as it so chose, until we were hit with more noise. I could imagine this being played as someone is being executed by the electric chair. Not such a lovely sight, but the song is rough enough to remind me of such a sordid picture, especially with all the screaming involved.

hit and run [part 1] was fairly quiet in comparison to a lot of the other songs, definitely maintaining itself well within the noise genre. The chaotic nature of the song did not allow for a single sound to dominate over the other. Toward the end, you get a semblance of a beat, but it only lasts for a short while before dissipating into nothingness.

red noise [part 1] does a great job of building up anticipation within your body, and actually reminded me of a song found within a horror film right before the killer popped up and decimated a teenage party-goer. However, it wasn't my favorite song by far, and sort of was simple in comparison to everything else I've heard. It was sort of disappointing.

Then we came to perhaps what is my favorite song on the album, and that is racing heart. Just the amount of power within the song is enough to get me going, let alone the constant drops that reverberate within the song. The synth work is absolutely stellar within the song, and the beat alone really does capture what a racing heart should feel like in the mind.

Coming off that masterpiece, I wound up listening to broken reception. Beginning off with some static noise, it eventually filled to the brim with some noise and glitch like effects, making for a decent noise song. open sores came off as a creepy dark ambient song, with a main drone like note flowing throughout, with occasional drops here and there. Some female vocals come in half way through the song and add to the haunting effect, and it was grand to listen to this album.

the city continued with the story like vibe presented within the previous song. I'm pretty sure that the whispers come directly from the booklet presented with the album, but that I am none too sure of for I do not own the booklet as of now. There's a very low beat to the song that's taken over by a drone like tone. And it remains that way for the whole song. Toward the end, the female vocals come back and lead us out of the song in a horrifically beautiful fashion.

portals had a pretty muddy vibe to it at first, coming off as something based in the 80s, and continued that trend even as the quality got better. I'm sure that's how the song was meant to be, even as all the noise filled up my ears. It had a slight beat to it, but like with other songs on the album, it really didn't matter once everything else cluttered into the song. The distant whispers really got to me, as well. Or at least that's what it felt as if they were.

open the door [part 1] really came in hard with rhythmic noise and electronics. There isn't a whole lot to say about this song, other than it came off harsh and delightful. hit and run[part 2 began off the final fourth of the album, and this song actually played with synths more than a lot of the other songs. Despite all the noise on top of everything, there was a bit of a techno beat as the mainframe for the whole song.

red noise [part 2] continued on with more powernoise antics, and scream in the broken mirror acted out more vocals. In comparison to its counterpart, it was a lot more angry and harsh. It was like a remix of scream in the mirror, just made to sound more dark and desperate.

And, finally, open the door [part 2] sent us on our way. And, Christ, this was really, really harsh on the ears. Coming off like death industrial in a sense, the vocals were dark and forbidding, sounding like the devil himself provided the lyrics.

And that's the end of the whole album. I was extremely appreciative of the whole album, and was shocked to see how much each song varied from the previous. While a lot of artists tend to stick with one main sound per album they release, C2 managed to forge an album with bits and pieces of everything everywhere. Whether or not this was intended or just a happy accident is not my concern by far; in fact, it came out swell. All I can really say is that I want this album pretty bad right now. And I intend to get it soon enough.
# c2
# quadrants-the-stories-of-four
# control-freak-records
# controlorg
# powernoise
# rhythmic-noise
# electro-industrial
# techno
# new-zealand
May 08 2014
God Destruction Releases Teaser For New Album
Previous article
Psyborg Corp announces album release for May
Next article

BandCamp
Front Line Assembly - Re-wind is available at POPONAUT from 15,95€