Be My Enemy - This Is Not The New Wave 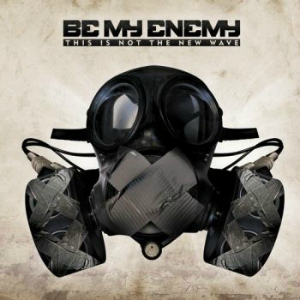 Spotify
Released 2012 by DWA
Electro-Industrial, Industrial Metal
It looks like Phil Barry's (of Cubanate fame)" Be My Enemy" is back with the latest release "This is Not the New Wave"; featuring alternative mixes and remixes of tracks from 2010's "This is the New Wave" and gives a different spin on the tracks from that album.

The second, 'new' disc kicks off with "Ghost in the Machine (Alternate Mix)" - straight away hitting with a full on 'four on the floor' beat and percussion before giving you a wall of guitar. The main difference in this mix is the fact it is much shorter than the original and features different guitar work in the chorus and bridge/breakdown parts.

"Death Drive (Die Sektor Remix)" - Die Sektor have their take on "Death Drive" next in the vein of their latest album "Final Electro Solution", showing off their dubstep influenced electro-industrial, and turning the track into something you would expect Die Sektor to write. As always, it's filled with glitches beeps and stutters that the band are known for and gives an excellent spin on the track.

"Disintegration V 2.2" - Disintegration is up next and this version is more EBM based then anything. The guitars are at the back of this mix as this version of the song is more synth dominant with a driving synth bass sequence and uses of multiple synth melodies while the guitar is interspaced throughout the mix in small parts only really taking the lead in the breakdown parts of the song.

"All American Psycho - End Titles" - Starts off with blocks of guitars while the bass guitar plays a riff while synths bleep in the background and drums start to play leading to the build up of the song. Throughout the background a siren sample loop plays. At the 3 minute mark things start to change with chords on a synth playing a small progression with the repetition of" And another one bites the dust" I was hoping the track would pick up more but at 6 minutes it was a very tedious alternate mix with little change occuring.

"HAARP (Burning Mix)" - WOW! This mix went off with a bang starting directly after the previous track and comes in with a pretty heavy kick drum and frantic guitar work that matches the aggressiveness of the original and helps redeem the pace of this release after I found the previous track a disappointment.

"Helter Skelter (Digicore Remix)" - Digicores remix of "Helter Skelter" has a more EBM approach to the track with repeating guitar parts at the start and heavily reverberating vocals before dropping into dubstep complete with heavy bass lines and cut spaced out vocal parts but still managing to keep guitar parts present from the original track. Some of the core synth sounds give the song a real breath of fresh air and take on it, redeeming this release from some of the more tedious mixes so far.

"The New Wave (Club Mix)" - Another extended and totally different approach to the original, starting to with its long droning almost air raid siren like sound before dropping into full swing with an electro/house like sound to it making the track totally overhauled with guitars being absent from the mix and very little vocals in the track too, making it more aimed at the dancefloor or for a club night more than anything.

"Automaton "- Automaton is a short 2 minute new piece that breaks up the album for a bit giving some breathing space with its pulsing bass synths and repeating guitar lead parts while synth pads are overlaid over the top adding to the already melodic guitar line before layering more synth melodies. I thought this was a great addition to space and break things up and prepare listeners for the next portion of the album.

"A Wasted Remix"- Going for a more downtempo approach the remix of wasted life with a slow pulse like kick and snare combo and the use of a repeating bass riff through out helping the percussive parts keep the pulse keeps it going along -however with a remix clocking in at over 6 minutes very little seems to happen leaving some listeners wanting to skip this mix.

"Revolution 101" - It Seems the electro interpretations are back for this remix with a strong rolling bassline alongside the beat keeping it going and stabs of more synth throughout and repetition of the word revolution makes for this mix to be minimalistic and catchy in places and totally fitting for a DJ set once in a while.

"The New Wave (Not A Slave Mix)" - Another mix of "The New Wave" , A lot less club based this version uses a drum loop and alternating between stabs or repetition between guitars and vocals alternating once in a while before switching to a chorus part adding something new to the mix and alternating the synth bass parts helping to keep the mix interesting.

"Break Your Body Again" - The tempo picks up again on this mix starting off right from the beginning with its heavy beat and repeating synth melody then coming in with the guitar riff along to the beat and bringing the melody back and throughout the mix adding newer synth and keyboard parts throughout keeping the mix through to the end.

"Helter Skelter (Phil's Sun Machine Mix)" - The intro for this mix I found extremely cool, beginning with an acapella of the chorus accompanied by handclaps making for a interesting and totally different approach already before the droning synths and bass come in and drops into a dubstep song complete with heavy basslines and guitars making it a new song entirely a great remix of helter skelter and keeping my attention after being put off from the previous mixes.

"Ghost In The Machine (Warehouse Version)" - Now some listeners may remember this alternate version from being on the free DWA compilation titled "Heavy Rotation" opening with repeating the chorus along side with a upscaling synth arp then going opening with a doubled up bass and synth riff alongside other melodies and adding in breakbeats through to the verse and chorus parts alongside a thick heavy synth bass part through to the breakdown before the ending.

"HAARP (End Of The World Mix)" - The Final Mix is of "HAARP" opening with more repetitive vocals and chugging like guitars and synth pads accompanying these parts before the drop into another dubstep like interpretation with deep bass wubs and wobbles then leading into a long build up complete with more acapella like vocal parts before dropping again a fresh and independent version of HAARP to close the album helps play on the strengths of the release and make sure it comes to a strong yet interesting close.

So my views on this is not the new wave I have found it to be very hit and miss with its highs and lows throughout the highs I find is how much individual the mixes sound and adding a totally new approach to the songs making them new songs on there own but the lows being things such as some of the mixes being a little too long or tedious and very little happening in them which may leave you skipping a few tracks before getting back on track again and the lack of other artists remixing which would of kept it more interesting and made myself much more curious. But none the less DWA delivers another good release that is far from the average alternative mix/remix album.
I'm going to give this is not the new wave a 7.5 as although it has its great and explosive moments some parts I find a little tedious and lacking in places to make it a truly solid release.

We don't have any stores registered for this release. Click here to search on Google
Celluloide - Words Once Said is available at POPONAUT from 5,95€