Batavia - Batavia and Their Friends 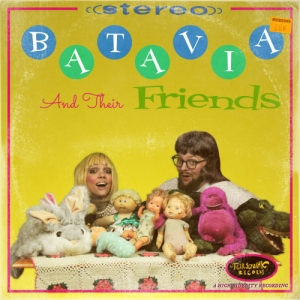 7.5
"Good"
Released 2021 by Tigersquawk Records
Industrial, Goth
It has been quite a while since I have reviewed a remix album (in fact, I can't quite remember the last one I did review and I do not feel like appropriating the time to find out what it was). I suppose this is due to the fact that I prefer hearing an artist's solo work rather than hearing reinterpretations from various other outfits. Plus, I have always found that remix albums tend to be of a splitting opinion; on one side, I receive a couple of really good remixes that I can carry into my personal playlists. Then there are others that I want nothing to do with for either sounding too generic or just plain disgusting. This is exactly why (though I approached the album with some trepidation) I found it so relieving to be given Batavia's remix album "Batavia and Their Friends". Rather than finding myself in a sea of disappointment and mixed feelings, I came off the remix album rather impressed and, shockingly, having fun on subsequent playthroughs.

Before I get too far, though, I would like to talk a bit about the band's history. Batavia consists of Ed and Terri Cripps, a husband and wife duo making industrial, goth, and other such music. While they had been acquainted for years, they reconnected by chance. Perhaps, even so, fate dealt them into each other. Passing time, the two got married in November of 2019. Ed played in bands within the Providence and Boston areas and had been recording since his teenage years while Terri began playing piano and singing from a very young age. Naturally, with a similar taste in music and both having a fondness for one another, Batavia was born. They call out a wide range of musicians as their influences such as Skinny Puppy, 16Volt, C-Tec, Godflesh, The Jesus and Mary Chain, The Smiths, and others.

Batavia's first EP was released on July 4th of 2020 and was titled "Graveyard". The four track EP attracted the attention of Tigersquawk records and it didn't take long for the duo to release their follow-up EP "Quite Mean Spirited" on August 29th, 2020 via the record label. Moving fast, they then released their first single 'Step 13' on November 6th, 2020. This leads us to the present where Batavia has just launched their remix album "Batavia and Their Friends", which features multiple artists reworking the band's current discography.

The cover art of "Batavia and Their Friends" is simply hysterical. It shows Ed and Terri in awful wigs behind a bunch of stuffed animals and dolls on top of a table with a drape covering it. A low price sticker sits in the upper right hand corner of the record with a price point of sixty-six cents. This looks like a record that was never released that should have been sitting in the bargain bin of a local music shop. But as I say with every review - and despite how much I adore this cover art - it does not effect the score. Exploring the cover art is just fun for me to do.

"Batavia and Their Friends" contains fourteen remixes altogether and I would like to put a spotlight on the ones that I enjoyed the most as going through each and every remix would be a redundant chore that would have you turning to other pages on the site shortly thereafter. The first remix comes in at spot number two on the playlist which is 'Scab Mask (Alors On Danse Mix)'. Ironically enough, the remix comes courtesy of Batavia themselves. But, this is no shock; there should be none better to understand a work of art than the creators themselves. This remix turns the song from an industrial metal track into a stompy industrial-club mix. I have to admit that I enjoyed this version much, much better than the original.

And, not to jerk off Batavia once more, but as I was listening through the music and making mental notes about which remixes I enjoyed more than others, the next noteworthy mix came in at number five. Which, again, is an in-house remix done by Batavia. While the original song had a bit of a somber mood about it beckoning forth ambiance, 'Fields of Gray (UHF Mix)' gives off a positive mood. It is an extremely chill track that works with piano keys, and I love some good piano work.

But, alas, I can also talk about at least one other project who served up a juicy remix on the album, and that would be Spankthenun remixing 'Step 13'. The wonky electro-industrial act took the original, noisy industrial metal affair and transformed it into a club-ready, punchy affair. Combined with the blips that sound like they were recorded off an electrocardiogram, Spankthenun served up a grand remix. Good work.

There were only two remixes on the album that I didn't like, and those come from Psyence Fiction and Beta Virus. Psyence Fiction took the wonderful gothic-western track 'Ab Initio' and made it an experimental bout of almost nothingness. Nothing really pops and what made the original so unique is now gone and lost without being replaced by anything too substantial. I found this remix to be weak and underwhelming. Beta Virus' remix of 'The Absinthian' was an unnecessary addition. I think the original track trumps this one in regards to production, sound design, and overall fidelity. I suppose, when it comes to remixes, I expect songs that are either on par or better than the original song and these ones failed to meet those expectations.

"Batavia and Their Friends" has a lot more to offer than what was discussed, here, however. There are remixes from Insatiable Void, Syrinx, Mach Fox, Microwaved, Ghstprxy, and fan favorite Grendel. Having such a diverse range of artists also means that the mixes provided sound different enough from one another that this could have just been a collaboration album more than a remix album which, I suppose, it sort of is. Sure, I didn't enjoy two of the songs on here, but that doesn't change the fact that there are twelve more to enjoy. The album is available on Bandcamp under the "name your price" moniker. So don't be cheap.

This review was commissioned through our Ko-fi page. Feel free to check it out for review, interview, and premiere opportunities.

Bandcamp
Apocalyptica - Shadowmaker is available at POPONAUT from 18,45€

Z'EV - 'A Handful of Elements'