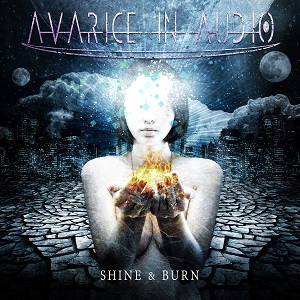 7.5
"Good"
N/A
Electroracle
Released 2014 by Alfa-Matrix
Synthpop, Electro-Industrial
Now, I've had the pleasure of interviewing both Gerry and Jade of Avarice in Audio in the past, but I did not receive the honor of talking about their music up until this point. With their Frostbite EP teasing their full length release Shine & Burn, it was only a matter of time before I got my hands on the debut album from this duo. And, now that I have it for my own listening thrill, I am here to pass judgment on the album.

Not shy in introducing their collaborations with other artists, Feed The Addiction kicks off the album with Ascension Ex backing up the overall ambition of the track. With a menacing laugh giving us a little introduction to the song, we're delivered a track that is clean with its production, but didn't necessarily suck me right into the album on the first go. I will say that Jade's operatic vocal work was absolutely brilliant, though. The rest of the song sort of fell into territory that's been explored one too many times, and often felt like a stale effort.

However, with a faster rhythm and much more emphasis on Jade's vocals, a little more instrumentation and tighter electronic work, The Cassandra Complex completely reversed my opinion on the album. Plus, the added trance elements put an extra bounce on the song that made it twice as fun. I think I really appreciated the parts of the song when both Jade's and Gerry's vocals interchanged, almost like a battle between the morally good angel and the mind bent and corrupt demon.

Bleed As One once again hammered out a delicious beat that both reminisced past projects the two have worked on, but with a new mindset attached. The more digital vocals coming from Gerry were welcomed, and I really appreciated when his chords backed up Jade's; it led to some magical moments in the song.

Futurepop act Redux came along for the ride with Sleepwalking Societies, creating a refreshing melody to the song and singing right alongside Jade. I really enjoyed the instrumental intermission that occurred around the one and a half minute mark; well placed samples and glitchy dubstep elements contributed to that. Though it only lasted twenty or so seconds before the vocals came back in, it was still a lovely bit to go through, and even managed to return later on in the song.

Now, while I will admit that the electronic music within Punished was absolutely stellar and I caught on to it easily, I felt as if the vocals were just all too familiar; meaning that I've heard one too many bands with a similar style to really sit down and say, "This guy is doing something different and unique." Jade's backing vocals were a nice touch, though.

The slower paced melody of Beyond My Control was nice, and with this slight change of pace came just that little nudge to Gerry's vocals to really transform them into something a little more individual than not. I really got into this track more than a lot of others on the album.

I don't want to spend too much time talking about Frostbite, as my thoughts are practically the same as when it was discussed in the review of the EP, but I will say that it is another phenomenal and stand out track on the album.

I would not be surprised if Your Fool wound up being a dance floor favorite at all; the steady rhythm and charming appeal should make for an easily addicting song, even if it may be rather simple. But, hell, it was done well nonetheless.

And, along came another golden track from this album with the help of XP8. Brooding with talent and excellent effects added to the vocals on all parts, it was a rather clean, popping track that made me wiggle my toes to the beat.

China White was a track in which a lot was going on all at once. While Gerry's harsher chords rang out over the beat, Jade's angelic hymn was right behind it along with a mixing electronic beat. If you can handle it all at once, it's great, but it tended to be a little overwhelming at times, as well.

Lackluster was a decent song, but to discuss it further would be a redundant effort; many of my comments would remain the same, meaning that the beat was nice, Jade did a good job, but I still felt as if Gerry's chords just weren't original as I would hope them to be.

The last song, Behind Your Mask, featured the extra talent of MiXE1. And, though being the last song, it was another track that really stood out. Slow paced, favoring sooth vocals and a punching delivery, I fell in love with this last labor of love.

And, that's that. I still speak from the heart when I say that it was an honor to go through this debut album from Avarice in Audio. Jade's vocals are something to fall head over heels for and die and die again, as she delivers in grand scale across every song she was featured in. While Gerry's chords could use some re-imagination and work to just add a unique flare to his presentation, they still served well enough in the songs presented, and there wasn't a moment where I felt so disgusted as to skip the song. Each collaboration, except maybe the first, was top notch and brought something more to the album, crafting one kick ass track after the next. And while sometimes the instrumental parts of the songs felt a bit repetitive here and there, it was hardly noticeable as one element or another brought a new taste to each mix brought to the table.

I do think this is an album everyone should check out. Like most artists debuting their first album, this was a major experimental phase, and I can only think that a larger grand scheme lays in wake of this album. Not only that, but for those of you looking to reap the benefits of this album even more, there's a bonus disc edition that includes twelve different remixes from acts such as IIOIOIOII, Nitro/Noise, Assemblage 23, and more.

Do yourself a favor and check this album out.
# avarice-in-audio
# alfa-matrix
# mixe1
# ascension-ex
# xp8
# redux
# synthpop
Nov 10 2014
Too Dead To Die - 'Murder On The Dancefloor'
Previous article
Vain Machine - 'Push'
Next article

Cryogenic Echelon - 'Fall Of The Reptiles'