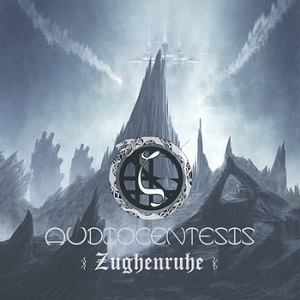 7.0
"Good"
Released off label 2014
Aggrotech, Electro-Industrial
Ah, nostalgia creep up on me like an assassin driving a knife into the back of his unsuspecting victim. AudioCentesis was the second band that I reviewed, and that was back in November of 2012. Time flies, I suppose, as looking back, it just seems like I started just only yesterday. Nonetheless, a year and a half has passed since their last full length release, and it's high time that I give these guys another shot in the dark. After all, they do sort of hold a special place in my heart as being one of the first guys I've ever reviewed and discovered through this site.

And, from what I can tell, this album definitely has a transformed sound from their previous effort. The vocals, for one, take a more distorted turn, perhaps a bit too much in a few songs as seen in Complex Delusions. Nonetheless, even though the vocals may be a bit too fucked with, the beat itself definitely took a stride for the better. More catchy, more enjoyable and cleaner than before, the drive behind the music wasn't all too bad.

Not only that, but in a sea of music where the lyrics usually run down to just be a two verses and then a chorus splitting it here and there, Audiocentesis decided to really go hard on their writing. Many different stanzas come into play, and keep the song from not regurgitating the same message over and over again, and that was well appreciated.

However, when all comes together for the best, such as in High Anxiety (which was absolutely killer by the way), these guys really pound out some great aggrotech. Not only that, but this time around, the overall quality of the music is a lot better than before, and allowed me to enjoy it all the more.

Monotheist brought along another fantastic beat really homing in on a pretty damned good background synth to boot. The vocals, however, were once more a bit too low and distorted to really cling onto, but, still, it wasn't too bad a problem and was easily overcome. Overall, the song was enjoyable.

Then came along the title song of the album, Zugenruhe. The word itself comes from two separate German words (Zug meaning move, migration, and Unruhe meaning anxiety) which pertains to apprehensive behavior found in migratory animals in the migration period (Thank Wikipedia for that information). Poetic as it is, the song plays right into darker, dance territory. Well done.

Fragments hit next with a slower pace with a bit of an atmospheric tone to it. It was dark ambient, in a sense with the background noise, with an electronic overture with piano works. If anything, this song really complimented the album art and even had some clean cut vocals. This was perhaps my favorite piece on the album, as the instrumentation was moving and emotional, and had a charm to it that no other song did. Beautifully rendered material, and a shock to see amidst the rest of this album.

I felt a bit sad moving from the previous song, but I had to, and Beyond Hatred came along next. As much as I liked it, it felt a bit standard in comparison to the rest of the album. Still a catchy song to nod your head along to, though. And the final song coming in before the remix section would be Through Walls. I was so glad that the introduction to the song took queues from Fragments, so that was good. The rest of the song followed with a slower pace, the vocals rendered very nicely just as in High Anxiety, and the beat also succeeding in its own right.

Now, here's where eight different remixers came in to give their say to a few of the songs on the album. Orbicide remixed Complex Delusions. Nice loud bass drops differed this song from the original and just made it sound more aggressive than the previous effort.

Ruined Conflict came in with a creepy intro on their version of High Anxiety, and the dance oriented sound worked over the mix very well. It sounded natural, as if it weren't a remix at all, and that's exactly what a remix should do to a song. Nicely done mix.

Exemia did a decent remix of Monotheist, using the already good synth work to their advantage. A faster paced mix in genreal with a higher BPM count, I'm sure you'll enjoy this mix all on its own.

Cold Therapy remixed Zugenruhe, creating much cleaner vocals, still growling, the beat itself slowed down a lot. Drums and random hits of noise really sheltered this song, and came out nicely.

Mach Fox had a lot to hold up on with his remix of Fragments. The originally was done so brilliantly, I consider it my favorite track done by Audiocentesis. Fortunately and unfortunately, I enjoyed the mix. Fortunately because it was different and good, keeping the slow pace and being more electronics and brisk than the original. Unfortunately mainly due to the fact that the original sounded so much better. But, still, check out the mix, it's decent.

2 Bullet was the next featured remixer, and added some nice guitar work and played with the vocals a bit more to make it sound as if a goblin was shouting at you. It came off more industrial metal than anything, and was actually rather interesting. You can tell the artist had fun doing this, and that effort was definitely put in.

Viscera Drip came along next with their mix of Beyond Hatred. I really didn't like the first minute or so of the song, but it got better after that. Still, because of that first minute, I don't think I can really go back and listen to this.

And, as the final remix on the album and also the final song, Gothique Prince Ken gave off a well worth your time mix of Through Walls. Synths were used heavily, a nice driving beat behind it all. I think this one was my favorite out of all the mixes.

And, after all is said and done, after all has been remembered, I come out quite proud of Audiocentesis for all the work they've done to improve their sound. The overall feel is different, less immature and quite more refined and cut. Perfection has shown on this album with Fragments, and I feel as if there is a brighter future available for these guys. So long as the vocals can be worked with and made more tangible to the ear, I can honestly say that I'm fully working forward to their next album. Good job.
# audiocentesis
# aggrotech
# zugenruhe
# orbicide
# ruined-conflict
# exemia
# cold-therapy
# mach-fox
# 2-bullet
# viscera-drip
# gothique-prince-ken
Jul 11 2014
Voodoo Bible - 'Seven Deadly Sins'
Previous article
Beauty Queen Autopsy - 'Good, Giving, Game'
Next article

Bandcamp (Digital)
Drab Majesty - The Demonstration is available at POPONAUT from 22,95€