Asmodeus X - The Bright Ones 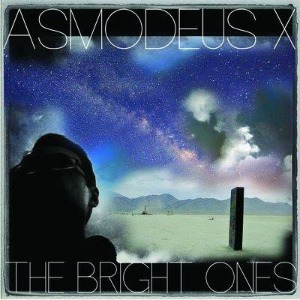 Spotify
Released 2011 by Kreislauf Records
Darkwave, EBM
If you're looking for a heady dose of psychedelic, cosmodemonic, trance-influenced EBM, and a melange of alchemy, angels, demons, extraterrestrials, and UFO cults sounds like a recipe for kooky fun, don't miss Houston-based Asmodeus X's fifth studio album, The Bright Ones. The album first appeared online in 2011, and was released on CD in 2014. Generally, I have to be in the right mood to listen to this kind of high-energy club music, but I found myself enjoying most of this album, ready or not. Two of the songs didn't do much for me, but the other eight hit the right spot. The band describes its sound as "Daemonic Body Music" (an industrial/darkwave/trance hybrid that incorporates sci fi themes and Luciferian values), and vocalist Paul Fredric explained in a 2003 Funprox interview: "The name itself is of Babylonian origin. On the surface, Asmodeus is simply a demon of avarice and luxury. Beneath that, one finds a more complex conception of tripartite alchemy. In other words, Asmodeus is also a model for self-willed transformation utilizing the three essential forces of the cosmos--positive, negative, and neutralizing forces.

"The X was added at the end for a number of reasons. To begin with, it brings the Kabbalistic sum of the word to Three. Also, it indicates the rune Gebo, which means 'gift' and implies the notion of divine inspiration."

That should give you some idea of what to expect lyrically, and if you're curious, Fredric expanded these themes into a book called The Erbeth Transmissions (published in 2010 under the name Fritz Fredric), which is the first of a proposed trilogy about the settlement of Earth by intergalactic cosmic beings. He started it in 2005 after being hit by a car and bedridden with two broken ribs. In a 2012 Houston Press feature, he described the book's genesis: "So with lots of spare time, a bottle of painkillers and the spirit of John Milton to guide me, I began to write. I believe the whole story of Lucifer and the Fallen Angels is really a vMEME. It reoccurs a few more times in the Bible--exodus from Eden, exodus from Israel--as well as in modern times in stories like Battlestar Galactica or media events like the Heaven's Gate cult suicides. Even Ayn Rand's Atlas Shrugged, beneath all the economic and sociopolitical ideas, at its heart extols the virtuousness of abandoning the sinking ship of a hopeless group-think movement. Some groups are just toxic and really the smartest thing you can do is just walk away."

The next song, "Fallen Angel," opens with a sample from a 1996 Heaven's Gate recruitment video, in which founder Marshall Applewhite, also known as "Do," says: "A long time ago, long before this civilization began (and I don't know how many subsequent times this occurred), that Kingdom Level had a Representative in a human civilization, and members of a classroom who were in the process of overcoming their human characteristics. Some of those members who began to serve in elementary ways for that Kingdom Above Human Level decided that they didn't want to listen to that Representative anymore, that they could do the things they wanted to do, and they weren't sure they wanted to get rid of human ways. And so they began to find fault in the Representative who was offering them a way out of the human kingdom. Well, you know the story from there--fallen angels, Lucifer, Satan, a third of the Heavens following a renegade that decided, 'This world is not for me. I can be my own god.'" Six months after the recording of the video, thirty-nine members of the group, including Applewhite, committed mass suicide in San Diego, believing an alien spacecraft following the Hale-Bopp comet would take their departed souls to another world. The song itself is a catchy, clap-filled dance-number with tribal rhythms and the refrain: "Come to me, fallen angel, come to me, this is a world I can't believe."

The third song, "Grosser Haus," is an aggressive German stomp-fest, but if you need a break from the album's relentless pace, the next song, the spacey "Planet E" is a must-hear. A trippy mish-mash of elements like electro and acid house shot through with stabs of theremin and punctuated with a soulful female "Oh, yeah," the song begins with a sample of a man saying: "Where did E come from? The answers lie in another part of the universe, some 40,000 light years from our own sun, on a line with a constellation we call... E, the fifth planet out from its sun."

"Seasons Without End" is a lush anthem that resurrects the magic of my favorite parts of "Destination Calling," but the next song, "Starry Encore" is too heavy on the oontz factor for my taste. The seventh song, "The Bright Ones," begins with static and a sample of a man saying something about an alien spacecraft, then introduces a haunting keyboard melody that strongly reminds me of the opening of Journey's 1983 song, "Separate Ways (Worlds Apart)." If Journey seems like an unlikely comparison to make for an industrial darkwave band, well, we are talking about a band whose live performances sometimes include a cover of The Partridge Family's "Point Me in the Direction of Albuquerque." Local legend has it that if you ply him with beer, Fredric will elucidate how the Partridge Family was really a group of satanic cultural ambassadors. Who would have thought, right? But maybe there's more than meets the eye. (Maybe they're robots in disguise.) Giddle Partridge, who once played keyboards for the Electric Hellfire Club, set that ball rolling when she introduced Asmo to the Partridge Family Temple. If you've never heard of the Partridge Family Temple (as, indeed, I had not), do yourself a favor and Google that quickly, lonely little raindrops, because you're missing something delightfully weird. Why these folks never got their own reality show is beyond me, because they're practically tailor-made for the medium, and fans everywhere of trash TV who want to keep up with something other than the Kardashians would rejoice, but before I get completely off-track (and now that I've outted myself as a Journey fan), I'll wrap up this tangent by pointing out that Asmo also does an excellent cover of Falco's 1985 hit, "Rock Me Amadeus," re-branded, of course, as "Rock Me Asmodeus," and if that's not a match made in some infernal netherworld, then I don't know what it is.

"The Temple" showcases a superb drum pattern and catchy chorus amidst its squelchy bloopity-bleeps, and "Theos," with its fast, tribal drumbeat and screechy vocals, brings a bouncing-off-the-walls energy to the table, but the album's closing song, "Power Factory (Alle Lassen Mix)," is one I would much rather hear when I'm actually in a club with a drink in hand. The highlights, for me, are "Fallen Angel," "Planet E," "Seasons Without End," "The Bright Ones," and "The Temple." Originally, I tried to narrow it down to two favorites, but then I thought, "No, better make it three," which was quickly followed by, "Nah, it's gonna be five!"
# asmodeus-x
# the-bright-ones
# kreislauf
# darkwave
# ebm
# trance
# daemonic-body-music
Mar 03 2015
mind.in.a.box - 'Memories'
Previous article
Interview with Blue Stahli
Next article

Amazon
Conscience - Gravity Has Gone + Bonus is available at POPONAUT from 11,95€