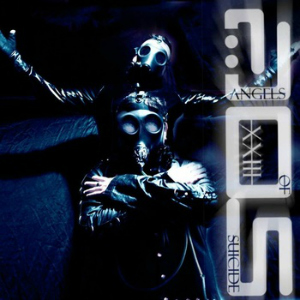 7.0
"Good"
N/A
Electroracle
Released 2011 by Engraved Ritual
Harsh EBM, Dark Electro
When a debut album is released, the natural listener response is, "Oh, here's a new band", entering into their experience thinking that they're listening to fresh songs from a newborn band. But chances are - unless that band consists of some incredibly lucky people - that band has been around for a while, struggling to get a record deal and establish a name for themselves. They arent the same musicians they were when they started, because like all bands, they've been evolving. Such is the case with Angels of Suicide, and the reason why I bring this topic up is that the group's self-titled debut is a retrospective, a culmination of three years of work, showcasing the evolution of their sound from infancy to present day. I appreciate this idea, the up-front presentation of their history. There's a certain intimacy to it.

'Angels of Suicide' is a nicely aggressive album, with pounding beats, hard-hitting synths, and growling vocals. I especially like the group's approach to synths, weaving sounds in and out, quickly changing things up. It's a bit like they're meandering down a path that goes here, then there, then loops back. This method works very well in some songs and seems a bit odd in others, but it's odd in a grabs-your-attention way. It's intriguing.

The album opens with "Running Astray", a perfectly placed track because it showcases a great buildup. A throbbing synth line is joined by a solid bassbeat that pushes the song forward harder and harder, culminating in a cut to an energetic synth line that really gets the song moving. It stumbles a bit when the synths change up again just before the vocals kick in because it scales back a bit too much on the intensity for my taste. If they'd maintained it, "Running Astray" would have been a great dance track. The change-up is intriguing, the minor synths adding an interesting element to the song, but the track didn't go where it seemed to be heading.

"Question" follows as track two, with fast-paced synth layers, cycling between drawn out vocals and instrumental breaks that are abrupt changeups from the preceding sound. It's an interesting addition to the album, but I'll leave it at that because I want to move on to track three, one of the three stand-out songs on the album. The wonderfully and classily named "Cock Slut" is an aggressive force that doesn't let up from the first note to the wind down at the end. A bone-rattling bassline dominates the song, one that I'm fairly certain caused some hearing loss when I cranked up the volume on this song while driving along in my car. A dancefloor-worthy synth line kicks a few minutes in - I can see this song being an interesting, non-traditional addition to a setlist at a club.

The album takes several steps backward in intensity with track four, "Distorted Life". While there are relatively fast-paced movements within the song, it mostly flows along with melodic synths and toned-down vocals. It's well-placed, giving listeners a nice respite after having their eardrums abused by the track before it. This respite somewhat continues with track five, "Infinite Wisdom", although it picks up the pace a bit. Like track four, though, "Infinite Wisdom" has a flow to it, with synth lines that move around and change, with vocals that continually manage to fit well with them, no matter how much they change up.

Then we come to track six, "Ass Fault Planet", another one of the best songs on the album. The song opens with a rhythmic synth line that pairs well with a solid beat with a metallic overlay, shortly joined by angry, chanting vocals. Around the 40 second mark, an excellent continual, minor-key synth line kicks in that changes up the feel of the song quite a bit. A couple more changeups follow this one, with vocals exiting for a bit as the instrumentals morph into something new. This track is a good example of Angels of Suicide's greatest strength: The ability to weave an interesting path of seemingly unrelated synth lines together and making them seem like a natural evolution, all the while fitting well with the vocals, which are always dependably aggressive and flow with the beat.

Speaking of beats, the most interesting beats on the album occur in track seven, "Anesthetic Coma". While it doesn't match the quality of the track before it, I appreciate the strange, stuttering beat that fits in oddly well with the vocals. This is highlighted by the fact that the vocals and beat are prominent through much of the song, with the keyboard only heard faintly in the background. It's an intriguing contribution, one that's on the verge of discord but manages to work well.

Following this is "A Serial Killer is Born", the final of the group of stand-out tracks on the album. It opens with a minimal, minor-key synth line paired with the tick of a clock, echoing samples, and a short sputter of synth notes that come and go, joined later by a full, rounded beat accompanied by a hi-hat. Slow vocals emerge and the instrumentals begin hinting at a picking up in intensity to come. This changeup occurs a bit after the two-minute mark, and is handled flawlessly. It manages to maintain a delicate balance between intensity and relaxation. It's a somewhat haunting piece. I suppose I'd call it aggressively ethereal.

The album ends with "Anti-Socialist", and it, like the opening track, builds up nicely. Synths and vocals are layered interestingly on this track, with synths once again following an interesting path. It's a good wrap-up to the album, ending abruptly in a way that leaves the listener waiting for more, a unique way to close an album, as albums most often fade into a definitive end.

All in all, 'Angels of Suicide' is a good album. As I said, I like the fact that this is a retrospective. It's interesting to hear the evolving sound, and it makes me want to hear more. This group shows potential for adding a unique contribution to the dark electro genre. They've shown us here where they're heading. Now we'll have to await their arrival.
# angels-of-suicide
# engraved-ritual
# aggrotech
# harsh-ebm
# dark-electro
Jul 11 2012
Black International - 'In Debt'
Previous article
Syndrome X/209 - 'Gemini'
Next article