‘Fool For a Day’ and ‘Long And Tangled Throughts’ were meant to be included on “When Push Comes to Shove” and “Chin Up” respectively. However, they didn’t make the cut. How did they stand out from the theme of that album?
Soft Riot:  “Fool For A Day” is a more experimental track from the other tracks I wrote for “When Push Comes To Shove”. The vocals are more spoken than sung for the most part and follows more techniques from early electronic pioneers, like Cabaret Voltaire perhaps. It can get a bit dense in parts and complex in terms of instrumentation therefore more difficult to get all the elements to balance. And it was far less of a “catchy” song I suppose than the others, so I sort of shelved it as I wasn’t 100% on board with it at the time. Listening to it a couple of years later it’s got this cool, hidden “B-side track” quality about it and as it was a totally finished track I thought it would be a good idea to include it on this release.
With “Long and Tangled Thoughts” I really liked the track when it was written but couldn’t get the mix right in time for the Chin Up release. Although that album is far more minimal in terms of instrumentation — sort of an “ambient synth-pop” record — it was actually a lot more trickier to mix because all the detailing of the instruments stands out more due to its sparseness. So I just came back to that track again for this record and with having a year or two of distance from it, I was able to get it mixed as best as I could this time around.
The artwork is made up of American pioneer of modern dance, Ruth St. Denis, as well as American aviator Helen Richey. How have these two women influenced Soft Riot and why did you decide to include them on the cover art?
Soft Riot:  To be honest I was totally unfamiliar with the histories of both of these pioneers before working on Second Lives. As I was looking for source material for the cover art in various archival Creative Commons libraries, I came across old portraits of these two women that provided a summary of achievements, and then in turn I read further into their back stories to get to know about them more. As the saying goes “you learn something new every day”. Their stories were interesting and probably not well known so it felt right to work with their captured images.
As our general society progresses along, history starts revealing more of itself in different ways as a result of a more egalitarian view of what people have done before, despite race, gender, sexual orientation or other categorizations. This is due to how we evolve and increasing accessibility to research and documentation of past events. So for me discovering the stories of Helen Richey and Ruth St. Denis were a “second” discovery as I myself discovered them many years later, which is sort goes with the theme for this album.
What else does Soft Riot have prepared for 2021? Do you have any other albums, EPs, remixes, or singles in the works? Any live shows in the works?
Soft Riot:  As mentioned I’ve been working on a new album slowly, but I’ve also been doing more composing on a track-by-track basis, or settling on smaller collections of tracks for various things. I recently released a new track on a compilation for the Berlin label Dream Baby Dream and have composed music for a couple of upcoming compilations.
There’s also some remix work, including a track for Logan Sky & Steven Jones. Sky was the synth player/programmer for the last line-up of the classic “new romantic” band Visage and the track I’ve remixed was a later Visage track, including the vocals of Steve Strange. So that, and a number of other remixes I’ve been asked will start seeing the light of day in the coming months.
In July I’ve got a four track EP under the moniker Ostrofti (a non-sensical anagram of “Soft Riot”) called “Sudden Vision Zones” coming out on the new US imprint MediTape. This new label focuses on more meditation, ambient or deep field listening — and as my contribution to this label is far more out on the abstract plane than 2020’s Chin Up, I opted for a different name for this release. Again, another release with some set parameters to work within.
As for live shows, I’m slowly catching onto the idea after all of this time that they’re starting to happen again, and opportunities are starting to present themselves. So as I slowly start to come to terms that  “yes, we can all start playing again”, I think over the coming couple of months I’ll be gaining momentum again in terms of planning out where I’ll want to be playing for later 2021 and into 2022 and seeing what places that takes me to. So there’ll be news on what those shows will be coming soon.
Lastly, I’d like to thank you for your time. I leave the space below available for you to mention anything that I may have missed. Cheers!
Soft Riot:  Oh, I think I’ve covered quite a bit here for the time being! If anyone is looking for more information and other things just go to www.softriot.com I guess!
Actually — there’s one more thing: If anyone out there likes scents I did a collab with Berlin-based perfume/soap maker Seifenhexe (who also doubles as my booking agent) on a Soft Riot perfume called “Fate”. I guess I’ve “made it” now. Ha!
This interview was commissioned through our Ko-fi page.
Soft Riot interview Steven Gullotta https://www.brutalresonance.com/interview/soft-riot-jun-2021/ June 21, 2021 June 21, 2021 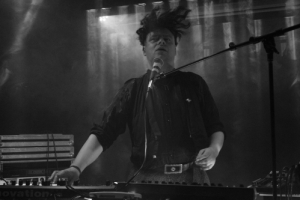 Clicks - 'ALL THE SONGS THAT WERE SUPPOSED TO BE ON AN ALBUM BUT NO LABEL WAS INTERESTED AND THEN I THOUGHT ABOUT RELEASING ONLY SINGLES BUT I GOT PISSED OFF AND DECIDED TO RELEASE IT LIKE THIS. ENJOY.'

Soft Riot - Fiction Prediction is available at POPONAUT from 12,95€